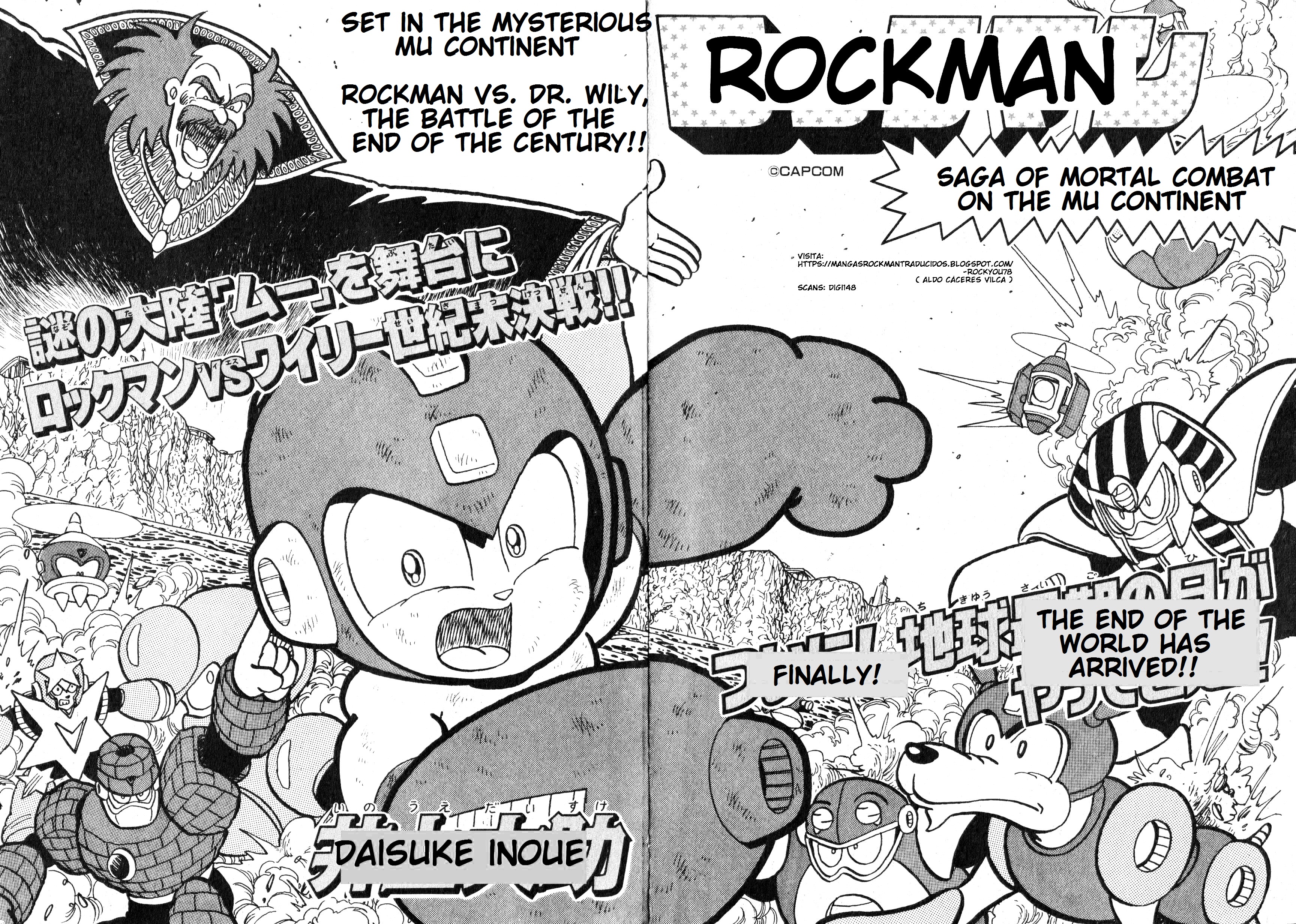 Megaman has had a ton of manga titles over the years. Naturally that also includes one shot adventures here and there. This is one of those and it’s pretty fun. Naturally when you’re only 1 chapter long at exactly 40 pages, there is only so much you can do. The nice flip side of that is pretty much the entire chapter is one nonstop fight scene so that’s always fun. I’d recommend checking this out.

The continent of Mu has risen from the sea after many generations. Dr. Wily manages to dash inside and take the place over before the heroes could do anything. He then used its infinite power to resurrect every robot master he has ever created. Megaman will have to put a stop to this before the Earth takes any more damage but can he really defeat this many opponents? Dr. Light has given Megaman an unnamed power up in order to handle these guys so we’ll just have to hope that it’s enough. If anyone can get Megaman ready for this then I suppose it is up to him.

One thing you’ll notice off the bat is that Megaman seems a little more unhinged than usual. Not to say he’s crazy or anything but he’s just really angry the whole chapter which is a lot different from how you usually see the guy. Typically Megaman is all about peace. He doesn’t really like to fight but does what he has to in order to win This Megaman is constantly yelling about how he’ll destroy everyone as he ravages through the base. There is a bit of a time crunch here since Megaman has to stop Wily fast so I guess we could chalk this up to nerves and stress. At the very least that’s probably the safest bet I guess. It’s a very different portrayal for sure but also one of his more powerful ones. What other title would have Megaman beating dozens of robot masters like this right?

The art is also solid. It certainly looks a little more modern than the others I had read. There’s more detail in each of the drawings and it works quite well for the fight scenes. You can definitely feel the action in each page and it works really well. You can feel the danger the planet is in. I think part of why Megaman is portrayed so violently is to show at the end how he has accepted the peace now. See, there is a voice in his head the whole time telling him that she wants peace and things like that. Now Megaman will be able to really understand and accept this. I’d argue that Megaman is usually an expert on peace as it is…but that seems like it makes sense.

With a 40 page chapter like this there isn’t a whole lot more to talk about. There are so many enemies that they all go down before they can really have much of a personality. You either already know these guys or you don’t. Megaman is really the important character here and I guess Wily. Wily has built another pretty powerful suit of armor/robot that he can use to crush Megaman although in this case it might be more accurate to say he built a control rig for it. The suit was already there from the Mu Continent and it has infinite energy which is pretty impressive. I guess they had a genius even smarter than Wily at the time.

If it really was the Earth itself asking Megaman for help and that powered him up in the end, I guess X has company now since the same thing happened in the X3 manga. It is nice to see a defender of justice like Megaman actually get acknowledged by the planet. It seems like it happens pretty rarely but if the planet is sentient then you do hope that it can recognize that at least one person is trying to save it. 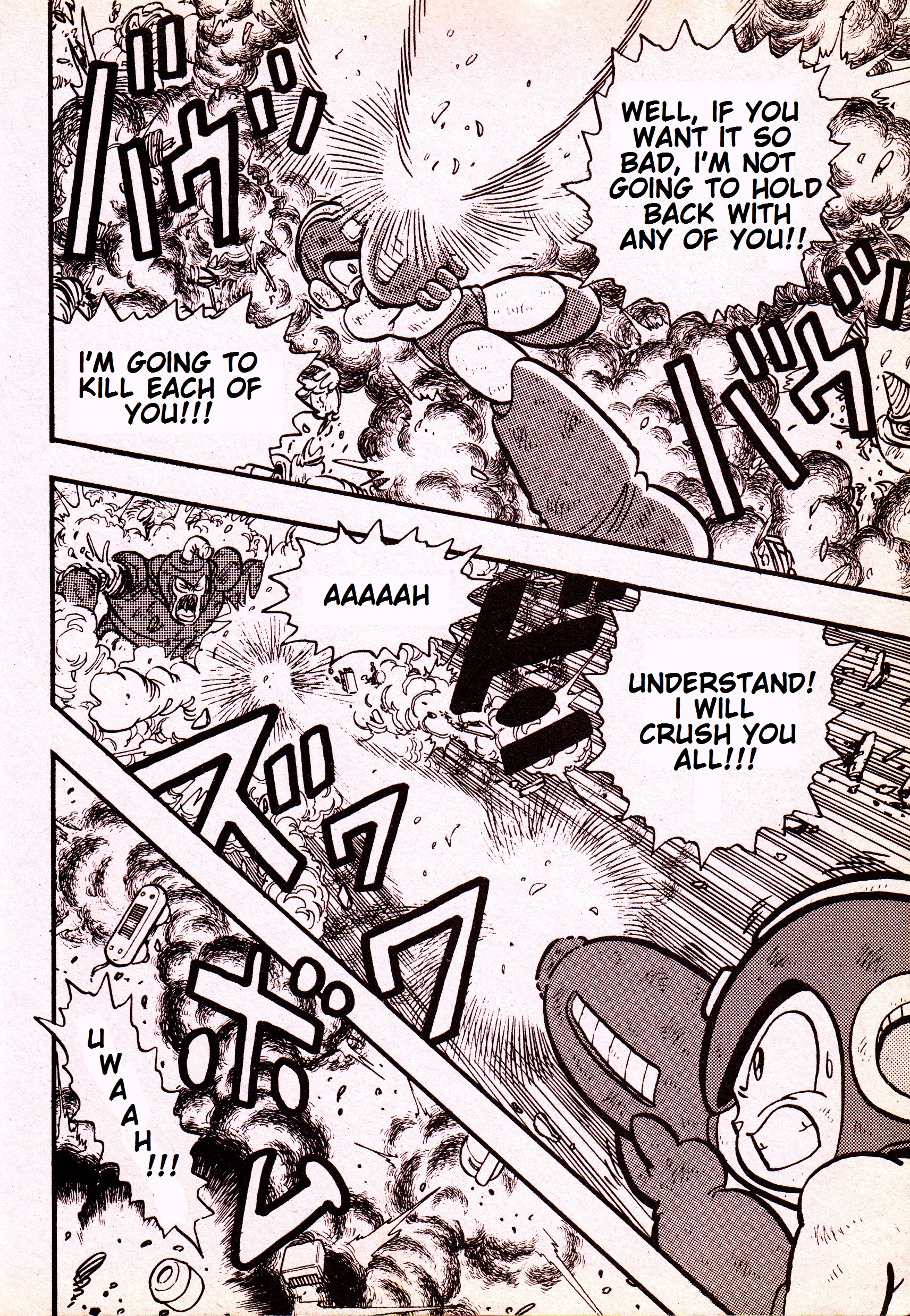 Overall, This was a pretty solid one shot. It really just threw us right into the action and worked as a complete story. Naturally if it were a few more chapters we could have fleshed out more of the battles and maybe gotten some big characters like Protoman in, but as it stands this was a satisfying adventure. It also shows that Megaman was definitely not playing around at all this time. He was just determined to completely obliterate anyone who stood in his path. I really think Wily caught Megaman on a bad day, perhaps he should have postponed his invasion of Earth. If you like action and/or Megaman then you should definitely read this. Not to mention that you’ll have it finished in under 10 minutes anyway so it’s not like it’ll take a lot of time.

2 thoughts on “Megaman – Saga of the Mu Continent Review”