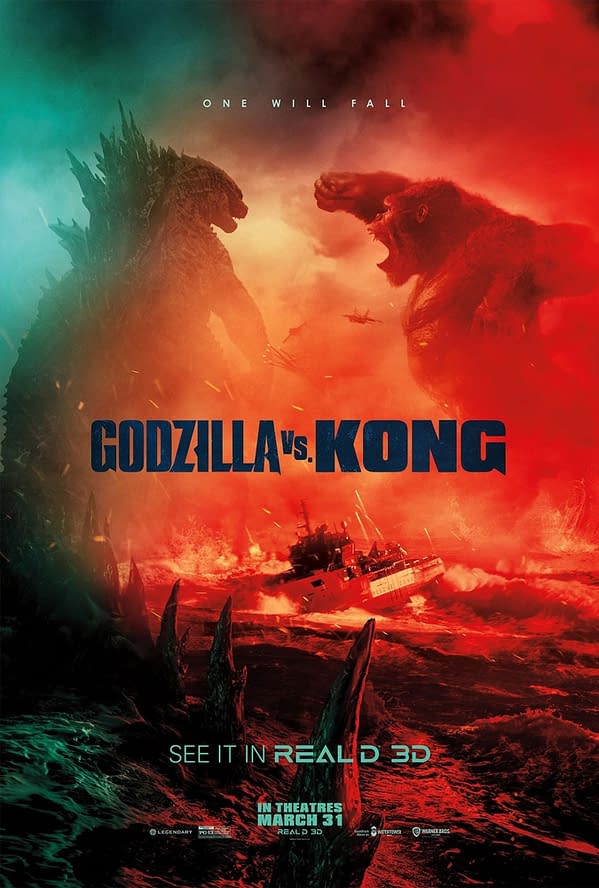 Crossovers are always quite hype. It’s always an excellent way to increase the hype for the movie plus it gives you a chance to pick a side. Are you Team Godzilla or Team King Kong? The staff also confirmed early on in the production cycle that this film would have a true winner since the biggest cop out is when you have a crossover with no actual winner. Longtime fans will remember I’ve been on Team Godzilla since day 1 tweeting out funny memes about how Godzilla would win and why he would. Atomic Breath is a deal breaker before you consider his physical advantages. Of course nothing’s a certainty leading up to a big fight like this so I would just have to wait and see. The monster verse has been going strong and this would have to be the strongest film in the series. We get a solid amount of action and the writing was on point.

The movie starts with showing how the government has managed to build a dome around Kong’s island to watch over him and prevent Godzilla from taking notice of him. Both of these titans have defeated every Kaiju who would dare stand in their way. Godzilla is determined to prove that he is the best so he will approach if he ever senses Kong while Kong will not submit to any other being. This delicate balance has been held for 5 years but the dome continues to take damage from Kong’s attacks so the humans have decided to change tactics. They will have Kong lead them to the Hollow Earth but can they do that before Godzilla attacks?

Meanwhile you have the more light hearted plot where a conspiracy guy named Bernie who is trying to uncover the secrets behind Apex. He believes that this company is why Godzilla has been getting more aggressive lately so he is on the case. He meets up with Madison and her friend Josh as they try to help out. Now, I’d say it’s clear from the start that the Kaiju are going to have all of the exciting scenes while the humans are here for the jokes. So you just want to make sure that they are funny and fortunately the movie does succeed here.

Bernie carries all of these scenes and is easily the best human I’ve seen in the monsterverse. Single handily you could say that due to him most of the human scenes are actually quite solid. He gets a lot of great lines like with the whole tap water test, tricking the guy with the apple, and trying the old janitor trick. He’s a very quick thinker and also grills Josh quite a lot. Without him the human scenes would have been a little dull or at the very least just felt like filler. Thanks to him I can actually say that this subplot doesn’t hold the film back from the action segments.

Josh is a very weak character though. He’s really just in the film to get roasted by the others. So in a sense it’s good that he’s here since some of the better lines are at his expense but as a character he’s the weakest one in the film. Madison is decent and at least she is able to hold her own with Bernie. I wouldn’t say she stands out much more beyond that. The other human plot is the one that’s going for more of a serious vibe.

You have Nathan who is trying to get past a tough situation since his brother died a while back. You may wonder why that is even relevant since it never really gets brought up after that or affects his character, but the film does want to make you emotional there I guess. Ilene is also a scientist who gets a big role along with Nathan since her daughter Jia is a central figure here. Again, she doesn’t have much personality like Nathan though and doesn’t get to do much in the film despite all the screen time.

Jia is a solid character though. Her bond with Kong is handled well and the idea of them being friends is fun. It’s similar to Gamera’s bond with the psychic from the Heisei trilogy. The other characters are always trying to get her to manipulate Kong but I’m glad that she never put him in any bad spots. Then you have the main villain who is your classic villain for this kind of film. He’s dealing with forces that can’t be controlled and all but at least he’s always ready with a speech and absolute confidence. You definitely need that when you live in a world where Kaiju are running around.

Now with the humans out of the way lets talk about the Kaiju. For every crossover the build up is important so you see both characters before the fight. Before the film even starts you already had some hype as every monster sent to Skull Island was vanquished during King of the Monsters (A scene that they should have put more emphasis on if you ask me since that was a really solid feat) and the whole lore about their races being at war in the past. As you could probably tell from all of the promos and such the film was playing Kong out to be the main character and that’s true here as well. He’s effectively the underdog in the fight so usually as a result you want to give him more of a focus. He gets more sympathetic scenes and is just shown to be a nice guy thanks to his relationship with Jia. Compared to Godzilla who is going around trying to prove he is the strongest, Kong is content to be on his island if the humans would just stop bothering him. He’s certainly got a great portrayal here so I’m sure his fans will be satisfied.

Meanwhile Godzilla definitely looks solid as well. He gets a lot of hype destruction scenes and he is actively seeking out all of the other Titans to conquer them. He’s clearly looking for battles which is nice because he is supremely confident in his abilities. The film shows what a monster he is too as he takes a ton of punishing shots and always gets back up. Most of the time it seems like he isn’t even injured and given that he survived a fall from orbit in the last film, it makes sense that not much would actually keep him down.

Naturally I can’t talk about the fight itself much without going into spoilers but it definitely delivers. The film was true to its word with a clear winner in both fights. Both combatants got to show off their strengths with Kong utilizing his dexterity and agility to really land a lot of punishing shots while dodging Godzilla’s atomic breath. Meanwhile Godzilla showed off his massive power and durability as he eventually just overpowers his opponents. This was the fight everyone had been waiting for so the back and forth action is quite intense.

Of course I can’t say who wins but you will be glad to hear that there is a significant amount of action here. Sometimes of course you can get worried that the Kaiju wont appear enough or for a while like Godzilla (2014) where you had to wait until the climax for the big fight but here we get multiple action scenes. You’ve got the really big fights of course but then smaller ones with other Kaiju as well. Low key there’s a bat type Kaiju that looked really good with the strangle hold it has. It was a nice showing of how even an unassuming Kaiju can be deadly if you let your guard down.

The special effects are also really on point. We’ve come a long way with the designs. Godzilla’s design is the most streamlined yet. I also like how Kong’s design reflects how he is a lot older than in his last film since many decades have passed since Skull Island. You can feel the passage of time. The energy blasts are excellent and the neon backgrounds of Hong Kong made for a really excellent battle. The film clearly had a high budget and was ready to use it. The soundtrack is also really solid. Kong gets quite a few songs to himself and of course we have a remixed Godzilla theme. If I have a slight nitpick it’s that I would have liked a more energized theme for when the two were actually fighting. Despite a really solid soundtrack throughout, the film seemed to get really quiet when the two were fighting each other and a nice rock song there would have been ideal.

While the film is great I think you could cut out a few scenes here and there like Kong eating the innards of another monster and a fish eating scene that were a bit more on the gross side. Fortunately we don’t get any real animal violence though. Trust me, I was sweating bullets whenever we went to Skull Island or any of the warmer climates since having a random wolf pop up or something would have been the last thing I needed. Luckily none of that really happens here. The eating scenes can be a bit much but not enough to really take a dunk on the film’s overall score though.

That’s really the only small weakness I can say the film had. It’s just a great all around film. It sets a high bar for the next films to top. Since this is a spoiler free review there’s also quite a lot that I can’t really touch on here. With the extra details this review would be quite a bit longer easy but there’s a lot of fun things to experience going in blind. It’s not so much about twists and such but just seeing exactly how the battles play out and how each of the plots end is something you’ll be interested in following along. Each act of the film is really on point. Definitely a lot of big cheering type scenes where I’m sure the audience would go crazy in the theaters.

Overall, Godzilla vs Kong is definitely a success. Both stars really got a lot of great moments that you will remember long after the film is over. The climax is fantastic with Apex’s plot-line closing out in a nice way and getting exactly the respect it earned there so the film ends on a great note. Even the humans are better than expected mainly thanks Bernie who was just a great character through and through. Sadly there is no post credits scene but I’m hoping the Monsterverse continues. Bringing in Orga is the natural next step to escalate the stakes and get a new feeling of danger in but there are a lot of great Kaiju options at the ready that you can use too. Either way I’m confident that the next installments will keep up this high level of quality so I look forward to seeing that play out. I’m hoping all of the films going forward can keep the vs format as well even if they’re not crossovers but as a nice way to hype up each opponent.

6 thoughts on “Godzilla vs Kong Review”