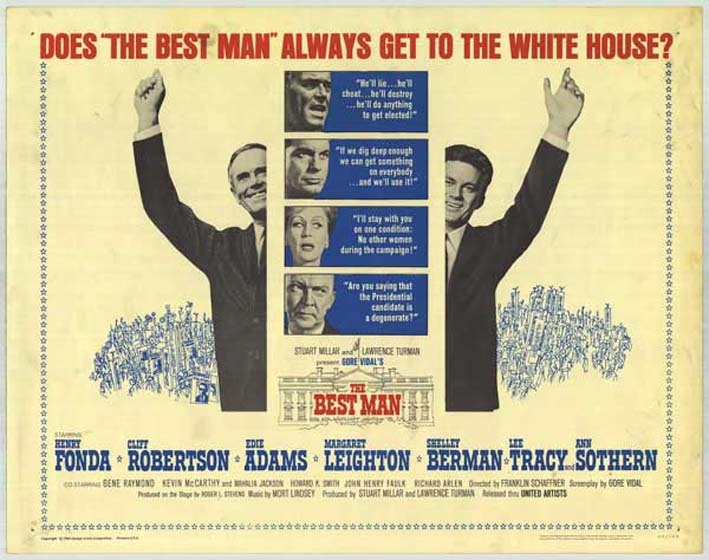 It’s been a little while since I’ve seen a political thriller so this was sure to be fun. A lot of times these old school films tend to be pretty fun with both sides trying to one up each other. The writing is strong here and so the film ends up being pretty great. There’s a few things I definitely would have done differently but at the end of the day you’re definitely going to be quite engaged the whole time.

The movie starts by first showing us William’s side of the story. He is a guy who wants to be President but isn’t quite as aggressive as the other candidate. He prefers to think things through slowly and then get to the right answer. He tends to hesitate a lot more when it comes to using the more under handed kind of tricks and wants to win in a clean fight. The issue is that he doesn’t like his rival Joe and believes that the guy isn’t the right man for the job. William is having troubles with his wife who is really only here for the power but it looks like things are going to break down between them plus William has had a troubled history of cheating and a breakdown.

Then you have Joe. Joe believes in the ole attack first in all situations and you’ll be okay. He tries to find dirt on all other candidates so that he can knock them out of the picture. He has no hesitation about using illegal means to find these items as well. Naturally that’s why he doesn’t like William since he feels like the guy isn’t tough enough to be President. Joe really serves as the main antagonist of the film since I would say at the end of the day William seems to be the true main character although both of them get a lot of screen time.

I should say that both of these candidates are from the same party so whoever wins the nomination will then be fighting the other party’s candidate. In theory they will all need to band together after this, but whether they will or not is another story. That’s really the premise of the film so you can imagine there is a lot of back and forth debate between them. I would say the only weakness in the film is that the characters only meet up twice and don’t really get to mix it up much beyond that. As it is the first time mainly had a third character in the mix so they weren’t actively debating each other and in the second meetup there wasn’t much time.

I would have set this film a little earlier so we could have had an actual debate with both of them fielding questions and attacking each other. I think there’s a whole lot they could have done with that. Still, their meetings are solid and the writing is just top notch here. Each character is desperately trying to win in their own ways which just are not compatible with each other. No matter what, one of these guys will have to lose.

Art is a big character here since both candidates want his nomination since it could tip the scale either way. William tries to nudge Art in his direction while Joe openly threatens him. Again you can see the big difference in each of their respective styles. Art’s a solid character and he does pick one side over the other. He does get quite frustrated with both characters as the film goes on though since Joe doesn’t pick up on hints well enough and William just doesn’t act. I’m sure Art wishes he could have just run again instead.

He was always a good voice of reason though so I liked the guy. Ultimately I would say Joe was the best character in the film though. He just made for a great antagonist with how over the top he was and how determined Joe got. Joe was willing to do anything he could such as in a long scene where we see him detailing the dirt he has on every candidate. He is also quick to break the rules if it helps him get what he wants. It’s all done in a rather serious fashion though so don’t think he is suddenly getting cartoony. The guy is ruthless but also quite smart about it.

Then you have William who does try to take the high road a lot of the time. He does seem to regret a lot of the mistakes he made early on his career and that is probably why he wants to stay on the up and up now. His approach of going through things slowly does seem like it would be dangerous though. He’s a good foil to Joe either way since they are polar opposites but it’s why he also doesn’t stand out quite as much.

There are a few supporting characters of course like the wives for both candidates. Joe’s wife was easily the more supportive of the two and she was fun to be sure. William’s wife made it clear she wasn’t thrilled about any of this but at least she was ready to support him in public and by the end they have a bit of a character arc. There’s also a lady who follows both of the candidates around a lot as she represents the woman’s division and gives advice on what the first lady should do. She made for a fun character on the side and at least the characters know she will always be there if they have a question on what they should do next.

Naturally the worst character here is Sheldon who seems like a con artist the moment he walks in. He takes years to actually get to the point and is always trying to start his sentence over. His nervousness is so over the top that you can’t help but distrust the guy. It just doesn’t feel like what he is saying can possibly be legit if he’s acting like that. It was interesting to have a guy this shaky running around but he couldn’t compete with the other characters.

Overall, The Best Man is definitely a great title. I liked the back and forth as we saw both candidates talk about their plans. Having dual main characters is always an ambitious idea that can pay off big time when it is executed well. As for the ending, I feel like the plan would ultimately backfire in most cases but here it sounds like it paid off. Bravo I suppose, but it always feels like such a decision is betraying everyone who was in your corner. I’d definitely recommend checking this out if you like to see a classic battle of wills. It’s a shame we couldn’t have a formal debate but you still get a really good understanding of each character’s position in this thing.