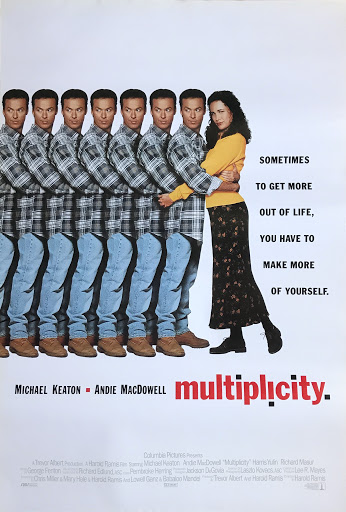 Who wouldn’t want to have a gadget that could duplicate yourself right? Ideally of course you’d want one that only turns you into multiple copies for a little while though. Any option that is permanent will end up causing a lot of issues because then that person will have become real. Well this film takes a look at that concept a bit although in a comedy context of course. The main character could have handled this a whole lot better and things would have been fine but he definitely wasn’t prepared for this. It’s a decent film that has a lot of fun moments but you do feel like it could have been better.

Things have not been going well for Doug lately. He is having a very hard time balancing his home life with work. He’s slowly losing touch with his wife Laura who wants to go back to work and as it is he keeps missing various events for his kids. Just when everything seems to be too much, he meets up with a doctor who suggests that cloning is the solution. Doug agrees and so they quickly create a clone. #2. #2 will handle the work obligations while Doug handles the home life. Can he pull this off?

Mainly a lot of the issues here come from the fact that both Dougs don’t actually discuss things with each other. For example, what to do if Laura calls the wrong one, how to switch out when things get dangerous, etc. The sad thing for Doug is that #2 actually does better at work than he ever did. Doug should be enjoying his time at home but he’s not a big fan of dishes and chores so he creates another double. You can imagine how this only increases the difficulties he starts to encounter.

Each double seems to take on a different personality though. #2 is a lot more aggressive and stern as I guess the workplace made him tougher. #3 is the one who does the chores so he is a lot more polite and even becomes an expert at folding. Doug is more of an all around guy I suppose so he does a bit of everything. The tricky part here is that Doug just wants to go and watch Basketball games or mess around but still wants to be at home at the end of the day. So that means one of the others has to find an excuse to leave the house to make the switch every time but that’s not always easy especially when Doug is coming home late at night.

Doug really doesn’t make things easy on the other characters, especially when he leaves home for days at a time. He imposes two rules on the clones, not to get together with his wife and to stop making clones after we get #4. That being said, since they are all him, he should probably realize that this is going to be a very hard ask. Another issue is that they don’t share memories so Doug is always incredibly out of the loop when he gets back which causes a lot of issues.

Really they should have had a quick recap meeting with each other at the end of the day before the switch or something. That would have definitely been a lot easier. Of course Doug isn’t really the planning sort but you feel like it would have made things easier. Surprisingly he doesn’t tell Laura even at the end either. Of course telling her from the start would have absolutely been the easiest way out of this. I don’t even think she would have had much of an issue with this although I guess it’s hard to say for sure.

One subplot the film could have done without was #4 appearing though. To be honest that guy just didn’t add anything to the mix and was more annoying than funny. I can’t think of a single fun scene the guy had since he was just way too overboard with how he became a kid version of Doug. I would have kept the film to 3 versions of Doug and that is more than enough to carry out all of the plots. Alternately just make hundreds of Dougs for the final scene of the film as you know that he’s going to be in trouble now.

Also, the film does go a bit overboard on each clone basically getting overpowered by Laura as they break rule number 1. Not much will power to be found with these guys. Less of those romance scenes would have been good so we could focus on the actual plot at hand. The film is at its best when Doug is confronting these guys. It’s always interesting to see a character effectively talking to himself. I was also a bit surprised that we didn’t see more of the scientist at the end but since the clones all actually worked out without issue I guess there wasn’t much of a use for him.

So Doug’s a decent main character I suppose but he definitely isn’t a smart one. He messes up everything he possibly could in this situation and that’s almost impressive in a sense since he couldn’t possibly have done any worse after a point. Doug has a tendency to panic a lot and his reactions can be amusing. Laura is a good heroine even if she doesn’t put two and two together but in her defense it would be really hard to assume that clones exist and that Doug somehow got a few. It would have been nice if she had found out about this but I suppose this keeps the chances for a sequel.

That said, a fun final gag would have been her driving home in a blue shirt and handing him some groceries. He goes inside and sees her with a red shirt as the credits roll. Then you have to wonder at what point she started with the clones as well. That would have been a great turn of events to end on. Still, that’s going off on a bit of a tangent so lets get back to the film.

Overall, Multiplicity is a film with a pretty solid concept. It’s original and I like the idea of a lot of clones running around and causing trouble. There’s a whole lot you can do with that. The film could have taken a lot of better angles with this or at least having Doug construct a better plan but it makes for a decent watch. I basically shaved off a star for the existence of #4 as well as for the over the top seduction scenes but there’s enough good here to keep the film in the green. There are a lot of humorous scenes here after all.