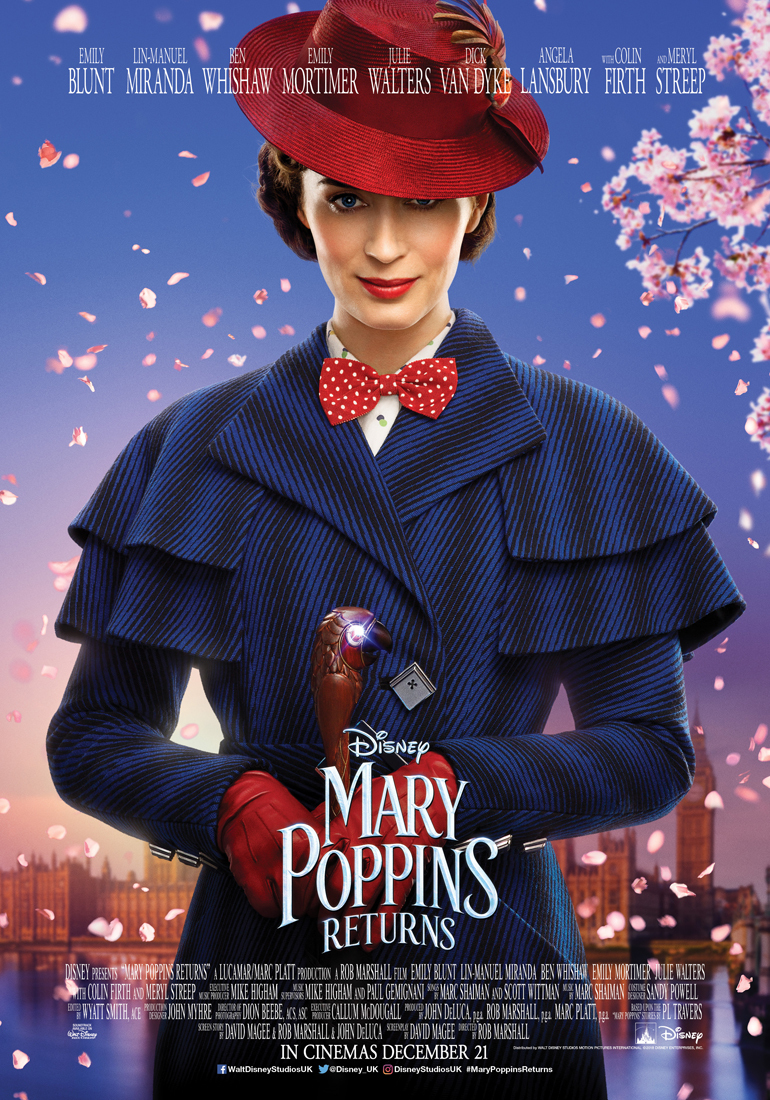 Mary Poppins is certainly a classic film that just about everyone as seen or at least heard of. The idea of it finally getting a sequel after all this time was certainly fun. It basically retreads the same ground as the original but it’s the kind of story that works well even more than once so this ended up being fun. I do think some characters don’t look great since their memories aren’t too good though.

The movie starts with Michael having a rather rough time of it. He has fallen behind on his payments. Despite getting a job as a teller, he hasn’t been able to make enough money to support his family. He took out a big loan with the house as collateral but forgot to make the payments on it so now the family is close to being evicted. Ever since his wife died things have just been tough and this adds another wrinkle to that. His sister Jane says they should find the stock certificate that their father had with the bank. If they can find it, William, the current chair of the bank, says that they won’t have to leave the house. The stakes are high but the 3 kids are a bit of a handful.

Fortunately, Mary Poppins has returned to be a housekeeper. She hasn’t aged a day since the characters saw her last but Michael and Jane are too busy to worry about such things. They figure that the events from the first film didn’t really happen anyway since it was all in their head. Mary is determined to show the kids what true imagination really is and along the way will try to help the main characters as well. Can she pull this off?

Of course she will be accompanied by a whole host of songs here. The music starts pretty much immediately in the film and never really lets up. You can expect song after song to be sure. Fortunately the songs chosen are pretty good. They may come out of nowhere at times and you feel like it slows the plot down but they could have been worse. For me the slowest part was when they went into the wonderland since I was ready to go back to the bank plot to see them take on William. That’s got to be the most intense part for sure.

I’ll give the film credit for allowing the kids to actually be useful this time around. Take Annabel for example, she’s a kid who is quite mature for her age. She helps with the chores and is always ready to jump in to help Michael out when she sees that things are a little overwhelming for him. Same with John who doesn’t mention that they don’t have enough money for groceries and tries to make do with what he has. The kids are young but they at least know how to improvise on their own and don’t really make things tougher on the others.

Georgie is the youngest of the kids and definitely isn’t as solid as the others. He runs off to grab a balloon despite the others warning him not to and runs on the grass as well. It’s a shame because the other two are so responsible but perhaps in time he should be able to match them. Then you have the caretaker Ellen who has a fairly small role but she’s a fun character. I would have liked her to have had a few more scenes but at least she didn’t back down to William’s minions.

There’s one subplot in the film about two sailors who fire off a cannon every hour. I admit that their plot may be the most forced as it’s a bit over the top so it’s hard to take seriously. It has an emotional end so at least the plot ends on a high note but I dare say you could have trimmed that plot out entirely. Instead we could have more scenes of Jack showing the world how talented he is. The guy is resourceful and definitely someone who likes to spread a lot of cheer around.

He’s certainly a reliable ally to have around and also works as Mary Poppins’ unofficial hype man. When the others are in doubt he just drives on through with his bike. He also has a knack for being at the right place at the right time. As for Mary Poppins, she is solid as usual. She has a lot of confidence and doesn’t really care when the other characters doubt her powers. She is very self assured of her abilities and that’s all that matters to her. Along the way she teaches the other characters how to have a good time in whatever they do. Alas, they will certainly miss all of her magical abilities.

We even meet one of Mary’s relatives in this film which was interesting. She can fix anything which is a nice magical spell of her own even if she has a weakness on 1 day a month. Now that the heroes helped her solve that she should be even more powerful in the future. Her role is very small but she was a fun supporting character. Then of course you have the villain William who was really good. I like how that guy really pretended to be a hero while manipulating people from the shadows. That’s certainly how you rise up the chains on the dark side. This guy took every opportunity possible and didn’t miss a beat.

His underlings are less memorable though. You have the mean one who is 100% on board and the nice one who wants the heroes to win but is worried that helping them out will cost him his job. Ultimately he steps up by the end though. Then you have the parents. Unfortunately Michael wasn’t a particularly strong character in this case. He panics far too often and always ends up taking it out on the kids by yelling at them for no good reason. He doesn’t even try to hear there side of the story and just forgetting to make a payment on the loan when he puts his house on it was pretty irresponsible. He’s generally a nice guy but folds too quickly.

Jane was holding it together much better in comparison as she was working her union job while helping out with this. It never broke her though so she was always around to lend a helping hand. The film also resisted the urge of setting her up with a romance plot here with Jack. She’s doing quite well for herself as it is and any kind of romance here would have been really rushed.

The writing and the effects are pretty good here so at the end of the day everything appears to be on point. The film will go by pretty quickly. They did a good job of making this film feel rather old school. There aren’t any giant explosions or anything and the characters talk in a rather distinguished manner like they did in the original film. It’s a very calm movie where you can just relax and watch the events proceed. Mainly my only gripe is just that the two parents look really bad thinking even for a second that everything was in their imagination. How could you possibly think that? Hopefully if we get a third film these kids don’t make the same mistake.

Overall, Mary Poppins Returns is a solid sequel and does a good job of bringing back all of the elements that made the first film good. In a lot of ways this is a film that is playing it super safe. It’s effectively a remake of the first film despite being a sequel so I’m sure they were banking on everyone enjoying it for that reason. It works well enough as it carries over the fact that there are no real negatives to be had in the film. If anything you might even feel sad for the main villain at the end since the film hits him with one last burn at the end. Of course when you consider how he was going to mess everyone over, you may just crack a grin instead. If you want to check out a nice little musical then this is a good movie to watch.