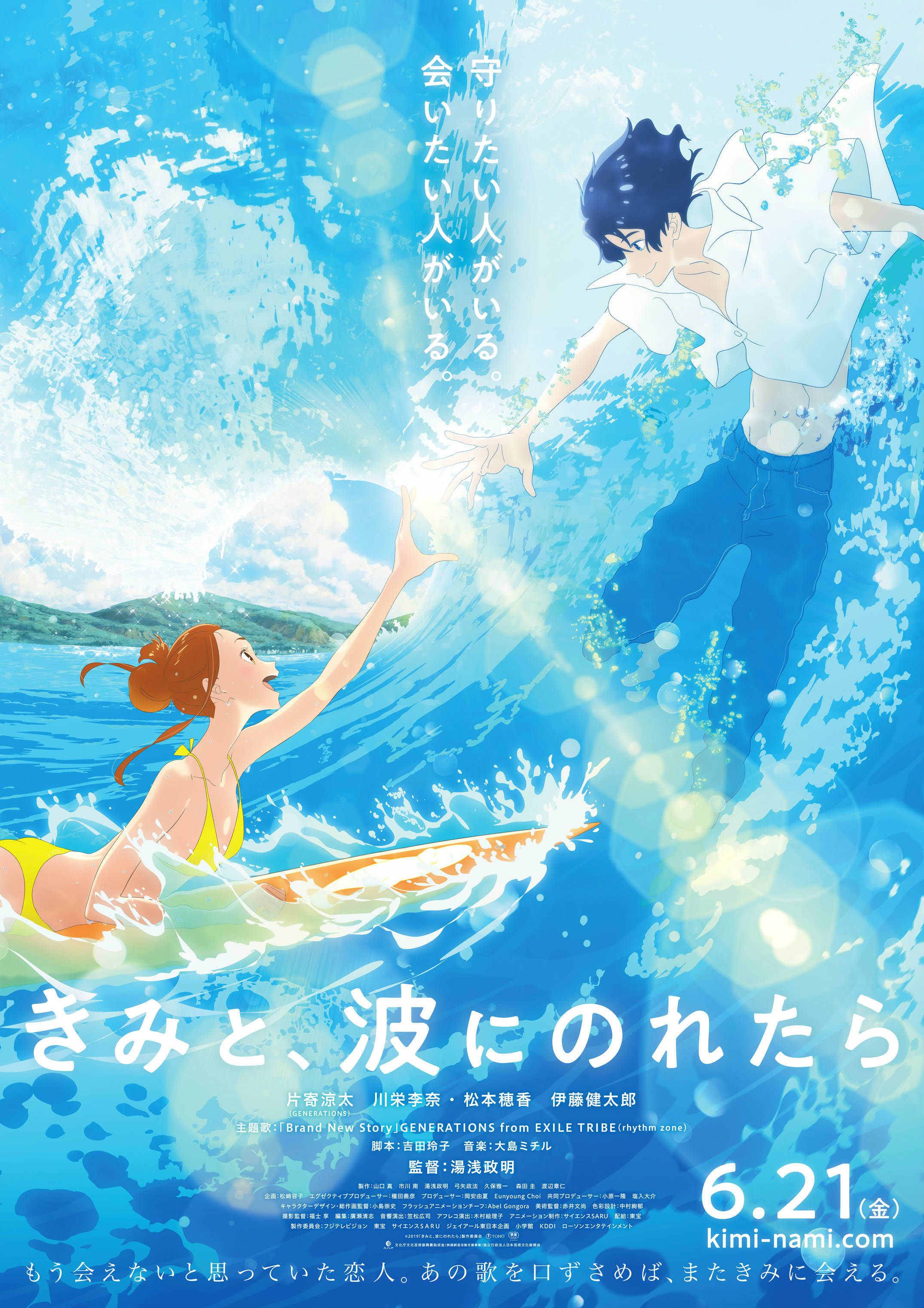 This is a film I actually hadn’t heard of before so that was pretty interesting. It came out fairly recently and has a very different vibe from most with the whole emphasis on water and everything. Surfing is definitely not a sport I can see myself ever getting into but with the film’s solid graphics it can make for some good scenes. The movie ultimately does well for itself.

The movie starts by introducing us Hinako who is a big fan of surfboarding. Whenever there is a wave, she is around to ride it. One day she is saved by a firefighter named Minato. The two quickly hit it off and have a few good months of fun, but unfortunately he drowns when trying to save someone. This throws Hinako’s life for a loop and now she must learn how to cope with what has happened. She also begins to see Minato everywhere she goes in the water when she sings. Is she slowly losing her mind? Her friends do their best to help but ultimately this will be Hinako’s trial.

Ride Your Wave is definitely a film with a lot of colorful effects throughout. The animation is really solid and it’s clear that a lot of effort especially went into the water scenes. That makes sense since ultimately that’s a huge part of the film. You get to see the water tunnels and they also do a good job of making the firefighting exciting. The fires really blaze with a passion and there’s a lot of good teamwork. Also, we have a lot of solid foods which was nice. Now, while the animation is super colorful, that can make it tricky for determining if the omelets had cheese in them or if that was pure yolk. Usually I would assume that has to be cheese but in quite a few anime they seem to refer to omelets as simply being a scrambled egg that is turned over even without any filling. So it’s a tough call but ultimately I will say it was filled with cheese and if so…that is a very impressive omelet. It is absolutely the right amount of cheese to put in. It’s a little tangent, but the film does want you to pay attention to the food so I think it’s fair. The lesson on coffee was also good.

The pacing is pretty solid with the movie. It’s not particularly long but a lot happens. That said, it was a pretty bold choice to use the death as one of the main plot elements. I’m wondering why the film didn’t try to keep that as a twist or something, but maybe it was important to set it up early to let people off a little easier when watching it. Minato was definitely a really solid character though and the fact that the film lets in a little supernatural elements with him was fun. He would ultimately have to be my favorite character in the film. Minato just worked really hard to get good at being a fireman and the movie shows that he never let his lack of natural talent get to him. The guy just studied until he did become an expert.

As for Hinako, she’s a solid character. She definitely has a rough time of it in this film but that’s to be expected. All things considered, she handled the situation better than some other leads. Hinako at least tries to go back to normal minus the surfing after a while and I definitely don’t blame her for abandoning that altogether. Seems like that’s probably the last thing you would want to do.

One of the supporting characters was annoying though and that was Minato’s friend Wasabi. This guy had to be the worst character in the film easily. Now, he was earnest so it’s not like his feelings for Hinako were fake. He liked her even before she went with Minato. The problem is that at that point he needs to cross her off his list mentally because that should absolutely be the end of the story. Especially once Minato is out of the picture because effectively he’s asking her out at a vulnerable time.

This is one of those scenarios where he should have just buried his feelings completely. Then he looks even worse when he effectively rebounds with Yoko. So yeah…I did not like Wasabi. The guy just seemed desperate the whole time. Yoko was more fun. She liked Wasabi from the start so it wasn’t a rebound on her side but how does she feel about being the second pick? Seems to me like Yoko probably should have rejected him, but beyond that I liked how intense she was whenever talking with Hinako and the others. She doesn’t mince words and gets past things pretty quick since she doesn’t show her emotions on the outside much.

In a way she helps to strengthen Hinako with her tough love approach. So all in all, the backup romance plot here is the weakest part of the film but otherwise it’s a story with a really strong foundation. I have to say that the biggest success the film had was not making Hinako insane. If the whole Minato being in the water thing was just in her head that would have been incredibly annoying. This twist actually helped the film quite a bit with giving her some closure as well as letting Minato actually contribute more. Who doesn’t want to have water powers right?

The film even gives us an action packed climax. This isn’t really an action film at all but I still appreciate having an ending with a nice sense of danger there as everything comes to a close. The idea of surfing off the roof of the building is also pretty fun albeit, fairly risky. Hinako dying there would have been super tragic and ironic to say the least. Maybe Minato would have been able to land in time to save her or dredge up some extra strength though.

Overall, Ride Your Wave is a solid film. It’s got a good story and solid characters aside from Wasabi. The pacing is on point and the movie is definitely over in a flash. The title song of the film is also really good which is fortunate since you’ll hear it a bunch. There aren’t really any other memorable parts of the OST since this one is definitely meant to be the focus. By the end you’ll probably know the lyrics quite well, or at least will have the first few lines memorized at minimum. If you want a solid emotional story that carefully balances the humor and uplifting parts with some tragedy then this is the one for you.