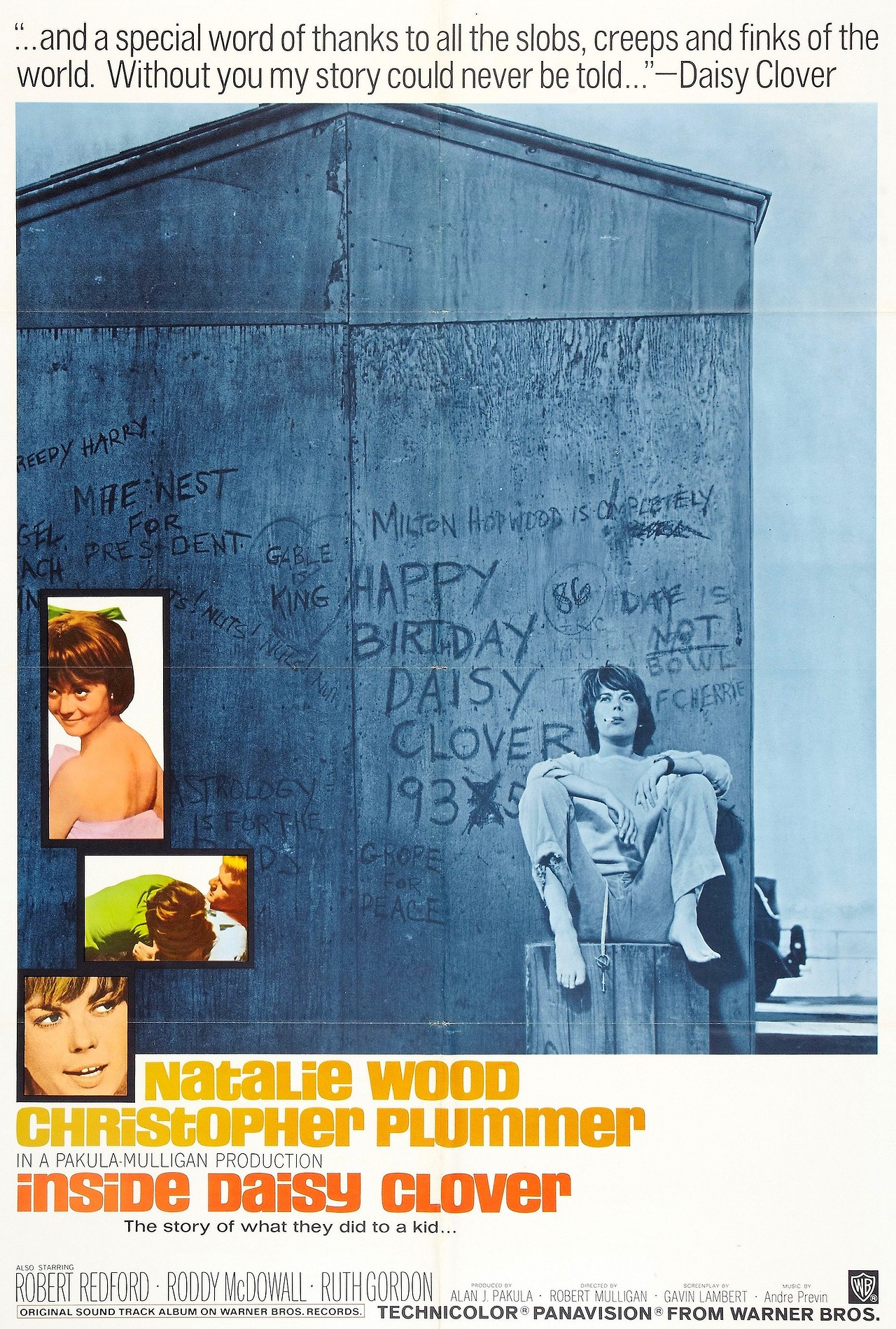 This film I technically saw almost a month ago but it’s time to finally look at one of those films that tries to tell you not to become a famous actress. At the very least it reminds you not to trust random people who may not have your best interests at heart. Inside Daisy Clover is an annoying film where the main character makes every mistake possible so there’s a rather depressing atmosphere around at all times. The film never really gets any better either…so you can tell this is not one I would recommend.

The movie starts by showing us that Daisy’s got a pretty rough life at the moment. Her father ran off a long time ago and her sister quickly escaped as well. Her mother lives in a broken down trailer but doesn’t really want to change her lifestyle. As a result Daisy works at a little record company where she is constantly harassed by one of her supposed friends. When she is able to potentially get work as an actress she quickly ditches this place as fast as possible. Raymond will be her boss now and he only has 3 rules, 1. Nobody must ever find out about Daisy’s past, 2. No affairs with local actor Wade, and 3. She must do whatever he says in order to make the films a masterpiece. Can Daisy do this?

Well, right away Daisy begins to have an affair with Wade who convinces her to go visit her mother at the asylum and then they skip a conference so the rules are out the window. Part of the problem with Daisy is she is portrayed as a little naïve most of the time. She is very quick to believe that Wade actually cares for her despite the guy’s rep as a flirt who has an affair with everyone. Here’s my problem, why would you think that you’re different? If someone’s already betrayed 6-10 people, why not mess with one more?

He pulls this off more than once and each time Daisy thinks that things might be different. Deciding to get married was also one of those scenes where you just shake your head. Then she rebounds into a romance with Raymond who we find out is definitely not a good guy. He even starts to get violent when she is sick in bed with some trauma over the whole thing. The end of the film is in theory trying to put Daisy in a happier spot after hitting rock bottom but things are definitely not going to be easy for her considering all of the burned bridges everywhere.

The issue is that Daisy just isn’t likable right from the start. She didn’t have the best upbringing so you’re not surprised to see her acting out but you kind of hopes that during the film she would have been able to change herself. Unfortunately that just wasn’t to be. It goes without saying that all of the other characters are bad though. Yes, you won’t find a single good character here which is really unfortunate.

Her childhood friend basically just wants to fool around with her and can’t keep his mind on anything else. Wade is much the same way as he goes around the country having affairs. Raymond is completely focused on making a lot of money and will use anyone to get it such as poor Daisy. His wife is a drunk who knows what is going on but can’t do anything about it so she just keeps on drinking. Daisy’s mother burns her house down and always acts irresponsibly. I guess you could say Daisy’s sister was reasonable but even for her the film hinted she was only around for the money.

A film can only be as good as its cast and this cast as abysmal. The writing is also not that impressive as the film just tries to make things as depressing as possible throughout. Daisy never manages to catch a break or she just keeps on digging a deeper hole for herself. Even the film bits aren’t particularly interesting. The only scene that I thought was at least a little effective was when she was in the studio and had to keep on doing a retake for the same song over and over again.

Raymond didn’t look very smart here since he should have known that she was close to a breakdown but decided to continue anyway. Well, that’s why he ended up with this result. We kept changing camera perspectives from inside the recording booth to outside where it is completely sound proof so it was an interesting parallel. It’s almost directed like a bit of a horror scene which was pretty cool. Not the kind of scene that can save a film of course but at least it’s one that I certainly remembered.

One of the general morals here seems to be that being an actress is never worth it. You’ll inevitably end up in a bad setting with people trying to trick you and the money drying up right away. That seems to be how all of these films end at least although you hope if Daisy had at least not fallen for Wade then maybe she would have been able to succeed on her own. It’s unlikely but you never know.

Overall, Inside Daisy Clover was a pretty bad film. The movie is going for a rather gritty vibe from the start with how her town seems rather town down and even the glitzy world of Hollywood seems rather darker than usual. Just take a look at the place she auditions when you watch the movie. It’s a dark hole in the wall with only one functioning light. Everything seems shady and run down in this world so good luck finding any place that looks okay except for Raymond’s mansion which is spooky in itself. I think doing a film about how horrible a career acting is will always be a difficult task because you have to make everything seem as dark and unpleasant as possible but then that means you probably won’t have any likable characters or you would have to bump them off. I’m sure some would do a better job than Inside Daisy Clover though so definitely pass this one by and look for something better. Maybe check out Singing in the Rain for how this should be done but in a more positive light.