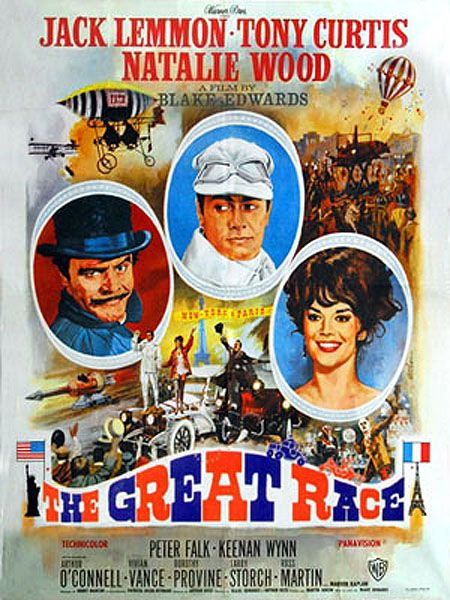 It’s been a while since I saw a film that was nearly 3 hours. Out of all the films I wouldn’t have guessed that a comedy like this would be one that would have such a long run time. It just would have struck me as a bit unlikely. Still, it does accomplish a lot in the time that it has. It probably could have trimmed some of the scenes a bit to be honest but at the very least it won’t be a film that you forget anytime soon. The Great Race really did feel like a huge ordeal that went past a whole country.

The film starts with introducing us to the contrast between Leslie and Professor Fate. Leslie is one of those guys who is a complete star and succeeds in everything he does. Everyone throws themselves at the guy and he is able to escape from a balloon in mid-air while tied up. He’s an ace driver and is talented at all he does. Then you have Fate who is incompetent at everything he attempts and everything turns out badly for him. No matter what he tries, Leslie is always one step ahead of him. It’s at the point where even if he isn’t outright mocking Fate, the villain takes it personally. When he finds out that Leslie has decided to have a race from New York to Paris, Fate knows he has to join. If he is able to defeat Leslie here in front of the whole world then he will have finally gotten his revenge. Can he really pull this off though?

Yes, the race does actually last for the duration of the movie. This is due in large part to the fact that nobody can possibly go this whole distance without breaks though. They stop at many different towns along the way ranging from Kingdom revolt to a small town where they want to show off their hospitality. Leslie is always ready to waste some time since he’s sure that Fate is no threat and Fate always ends up stopping as well. After all, he can’t win due to Leslie lowering his guard. He wants to defeat the guy fair and square.

There is one other big player in the film and that is Maggie. She is very vocal about being the first female reporter ever. She forces the head of the paper to let her into the race and to cover it that way. You have to give her this, she is definitely very confident in her abilities. She is willing to challenge anyone on anything to prove that she can hold her own. Of course, challenging Leslie isn’t the best bet since this guy is already more advanced than most characters. She was a fencing champion for example but so was he so that didn’t go well. He’s just too skilled.

We get a lot of good back and forth between the characters though. Maggie tends to lose out on these exchanges but she does put up a good effort each time which is the important thing. Then finally we have Fate who gets wrecked by everyone throughout the movie. He’s usually the punch line for each joke so as you can imagine things don’t go particularly well for him. He is a genius to an extent as he can build just about anything but always finds a way to mess it up. His character arc can be rather tragic but then you remember he’s a villain so you can go back to chuckling at him. He does help give the film a lot of energy though because he is a big part of what makes the film fun.

Of course, it all depends on how much you enjoy this humor style. It’s a very retro style with the heavy emphasis on slapstick and physical gags as characters get blown up and beaten left and right. We even get a wild west type bar fight where the characters are knocking each other around. This part definitely felt like a parody of the usual kind of fight with how over the top it was. The characters were literally tearing the place down as they fell through windows or into the stairs. It’s an extended fight that definitely worked really well. There’s also a big pie fight that happened later on but nothing can beat the fisticuffs.

There is even a sword fight later on or I guess it may be more effective to say a fencing battle. Part of the fun in having such a long run time is that you can take time to do all sorts of things. Now, if one plot had to be shortened though, I would have reduced the length of screen time for the King in the plot where he switched places with Fate. I have to be honest, the King wasn’t that amusing. His whole gimmick is using his crazy laugh over and over again but he doesn’t have much personality beyond that. You’ll feel like rolling your eyes at the guy by the end.

The movie is at its best when it’s straight up acting like a parody. Fate infiltrating Leslie’s board of directors meeting was pretty hype since his disguise almost held up. Using a race to finally end the various car rivalries was nice as well. Fate’s plans all blowing up in his face was always amusing as well. Perhaps it could have been repetitive if the same gag as used over and over but it was always a different thing that stopped him. This is one area where the Beach films could learn a thing or two as the motor gangs there could be very repetitive. It shows what a good difference in writing ability can achieve.

In a film that is as over the top as this one it makes sense that not all of the jokes would land though. On the whole I would say this one got more right than it got wrong. It’s just a pleasant film that is fun to follow along with. The movie sets up the dynamic with Leslie and Fate very quickly which is effective since it stays in place for the rest of the film. We also have a subplot with the newspaper agency trying to survive as the Woman’s Rights movement takes over the building. At one point the leader is even taken down and forced to plead insanity as he vanished. Now, none of this is outright stated on how it happens but one moment the leader is there taking names and the next he is at Happy Farms and his wife now owns the company. I was not expecting that so it was a good gag.

With a movie going for as humorous a tone as this you can expect that it would have some fun with the ending. It’s a bold one to be sure but in universe I think everyone would be absolutely livid with the main character. The race is quite important after all so messing with it is definitely not a good idea. We get one last big explosion for the film as well which was pretty neat. The writing was on point and at the end of the day that is crucial for any film.

Overall, The Great Race is a very fun film. We get a lot of great banter between the characters like Maggie and Leslie. I could have done without their romance there as it definitely felt rather rushed though and it also felt like Leslie would try and dodge the debates by pulling the moves on her. I’d have preferred they stayed insulting each other the whole movie as that would have made for even more great dialogue. It’s also ironic that she is the one plan of Fate’s that actually worked rather well but in this case that was not a good thing for him. There are a lot of other events that happen throughout the film as the race has numerous pitstops but you’ll have a good time checking them out as they arrive. This film is very much a relic of its time but one that works in every era.

2 thoughts on “The Great Race Review”