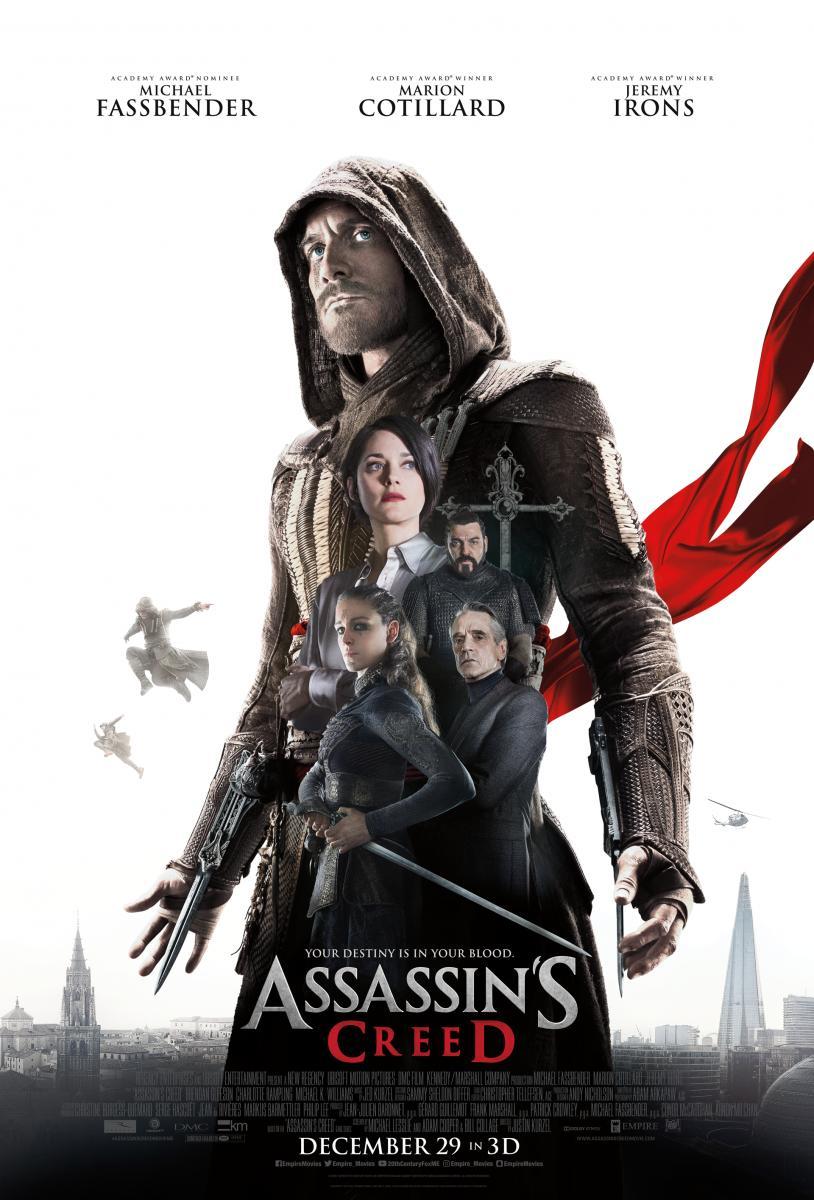 Assassin’s Creed is one of those video game series I haven’t played but I do see the games all over. Plenty of their characters have fought on the blog and if you’re a fan of parkour then it seems like it delivers on that. The games always have events happening in various time periods. Well, the film changes things quite a bit while taking a stab at one adventure. It’s a pretty good film although if you’re a big fan of the games it will probably be hard to get past the changes.

The movie starts with Cal witnessing his father murder his mother. The guy tells Cal to run so he does. The lead grows up as a very aggressive guy and after murdering a criminal is sent to a special jail. The staff there will be using an experimental time travel device on him so he will inhabit the psyche of his ancestor. They want him to find the golden apple or at least the location of it. The apple is what grants humanity free will so whoever has it in their possession will become immensely powerful.

So part of the film takes place in the present while parts take place in the past due to this neural link. I can say right away that the present timeline plot is a lot more interesting for me. The setting is effectively a jail for metahumans after all and you can see how things would be pretty interesting there. Down the road you could have some kind of war and if one such jail exists, I’m sure many more do. There are probably undercover bases all over.

The neural links also allow you to use the fighting abilities of your previous incarnation when you were an assassin. This means that the fighters are all very well trained so Cal goes from not having any real fighting abilities to suddenly being a top notch fighter. He’s able to take down dozens of opponents at once even though they also have enhanced abilities. His are just on another level.

I liked the fight scenes a lot here because of how stylized they are. I’ve always enjoyed the arm blade style weapons that the Creed films are well known for and they are put to full display here. You can imagine the film easily being rather violent as characters are getting ripped to shreds and beheaded but with the stylized approach most of it is actually rather bloodless. The enemies either turn into apparitions as we see what’s happening in the present or they just go down instantly. As a result despite the constant action, the film really isn’t very violent at all.

Since the assassins are meant to be rather subtle fighters, it does make sense that they wouldn’t be making much of a mess. There are a lot of fights throughout the movie so you will have no shortage of action scenes. There is less parkour than you would expect though. Cal does run around jumping on roofs and such and doing the big jumps from the games but that’s about it. It’s not something that happens super often but maybe that’s because the past doesn’t get as big a role as you would expect.

Again, that is for the best though. The present timeline is just a lot better. You have a lot of solid architecture and meetings there. Such as the corporate group led by Alan who wants to use the apple to take own the assassins. Alan makes for a decent villain although he’s not exactly a fighter so he just talks a good game.

Sofia is a much more interesting character. She is a villain because she cosigns on everything going on but you can tell she isn’t as absolutely evil as Alan. She does have good intentions even if they don’t always work out. Sofia would certainly get a big role if this film ever gets a sequel.

Honestly I would say Cal is the only other big character in the film. Sure, there are a few others like his companions in the past, present, and his father but their roles are fairly small. His father gets one of the most sudden scenes where he stabs a guard but gets finished off immediately afterwards. Also yes, I didn’t buy into the reason for why the father had to murder the mother. I don’t care if the army after them was huge, they’re assassins and escaping is what they are supposed to do best. Destroying an ally is always just a fancy way of saying you give up.

As for Cal, he’s a pretty solid character. Definitely one who is consumed by rage for pretty much the entirety of the film though. He’s gone through quite a lot and finally takes matters into his own hands by the end of it. Cal is in a pretty interesting spot for the sequel and one of the reasons why the sequel would have a lot of potential since the present should be the main focus now. There’s a whole lot more you can do with that than the past.

The film has a bit of a slow beginning though as you could say the movie doesn’t really start until Cal uses the machine. The flashback of him as a boy doesn’t really add to anything and just walking around the prison doesn’t make for the most interesting scenes. It’s a waste of the present timeline since you want to see the grand outside world and how society will react to the Assassins. That’s where the climax pays off.

As for the past, well I’ve referenced it a lot but it’s hard to be as engaged in that era. I’ve never been a fan of the past after all since the graphics aren’t as good and the backdrops don’t look as nice. There’s not a whole lot there to capture my attention at any given point. You have people dying left and right as Cal/Past Cal has to try and avenge them. Maybe if we had time to actually give some of the characters a real personality this could have worked but there was no time for that.

Additionally, you are just waiting for them to get to the present the whole time so there’s no way for it to actually leave an impact. I know the past is a crucial part of the Creed series but that’s why some of the changes here were good to get rid of that aspect. Throw us into the present for the real action. The only thing the past scenes were good for were all of the extra fight scenes as Cal took the villains down by the busload.

As for the soundtrack, it’s not all that noticeable. I would make the case we only get one really solid track which plays in the final minutes of the film. Right after the final scene in the present with the apple and Sofia’s decision, we get a theme that is likely taken straight from the games. Beyond that, it’s all rather standard fare.

Overall, Assassin’s Creed is one of those films that focuses on action over story which is always a decent move to make. It’s definitely not an all star film like Mortal Kombat or anything like that but it’s a pretty good movie. it’s fairly long so there’s a lot of time for battles and setting up the sequel. I’d make the case that a lot of the film is actually sequel bait since it’s all leading up to him escaping and the real adventure beginning. The odds of a sequel seem rather slim like with most video game films but who knows…maybe they’ll pull it off but more likely there will be a reboot at some point.