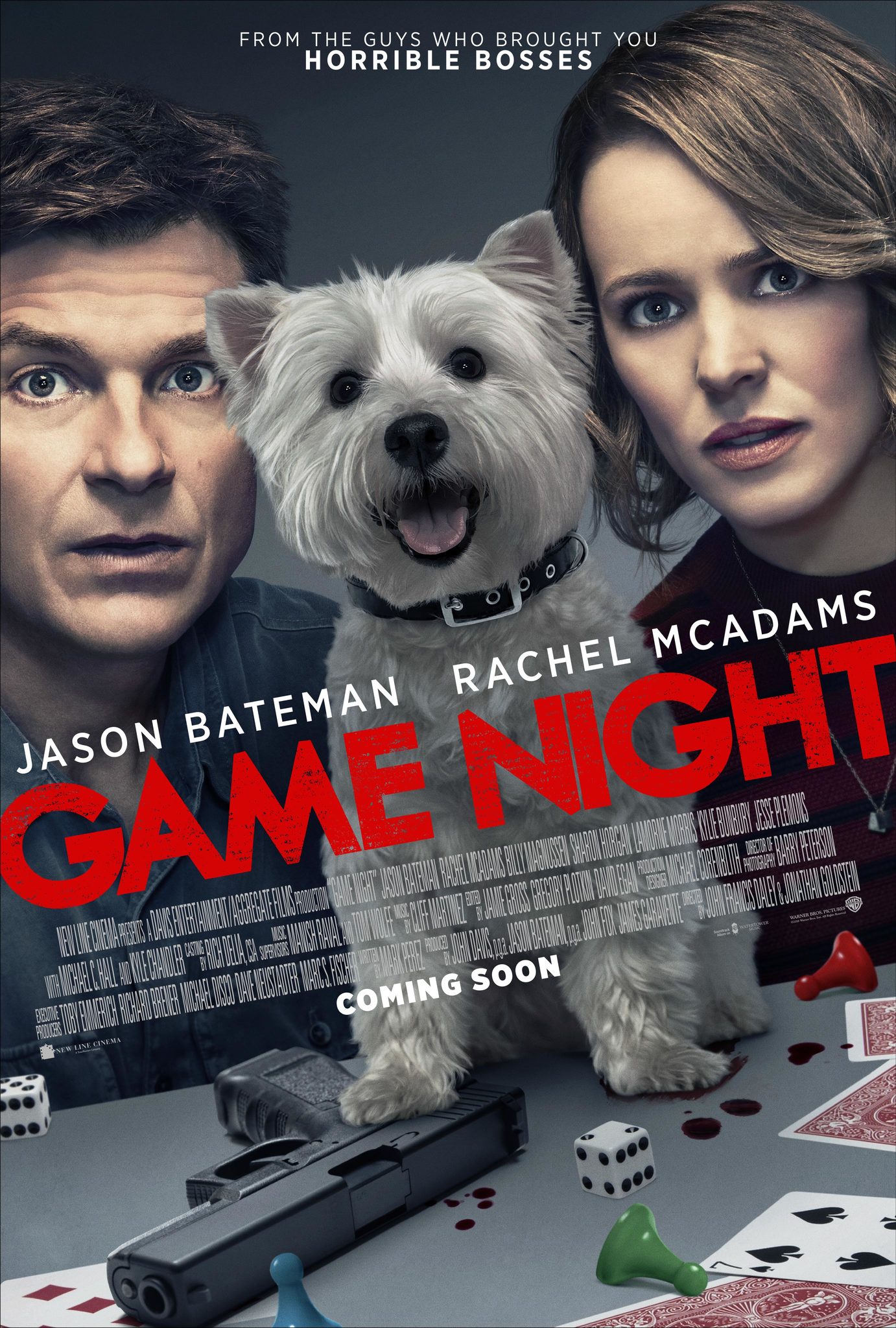 Game Night is one of those films doing its best to have a nice balance of being a parody while also having serious thriller moments. On the whole it’s definitely quite a bit of fun. Sub par writing does keep this film from being fantastic though and lowers it to just being a good movie. It has enough solid moments where I would say they overpower the bad ones but you can’t help thinking that it left a lot on the table.

The movie starts with showing us how competitive both Max and Annie are when playing games. Sabotaging the other team is just one of the many ways to win and they study for ages so that they are prepared for anything that comes their way. Eventually they end up getting married and continue the tradition of having their friends over for Game Night. They stopped inviting Gary over once he had a divorce though so they try to be low key now. Things all change when Max’s brother Brooks arrives.

Brooks basically exists to antagonize Max and try to shame him in front of everyone whenever they meet. He intentionally causes a disturbance and even shows up in Max’s favorite car. Brooks takes over Game Night and announces that the stakes are higher. Someone is going to be kidnapped and whoever finds that person before the others will get the car for free. This is Max’s turn to prove himself, can he find the car first?

The film definitely plays up the parody elements in right from the start where you can see how exaggerated everything is. Game Night goes all in on making the situation as crazy as possible like the scene where Brooks is attacked and nobody can tell that it’s for real. Then you have Annie running around with a live gun throughout the film but since she thinks it’s a toy she keeps pointing it at people and even puts it in her mouth at one point. One character gets shot and has to have the bullet torn out only for the whole thing to go in a different direction.

These moments are all pretty fun. When the film is embracing the wacky nature of the premise and all the twists it is at its absolute best. The film throws you a whole lot of curve balls throughout. There’s even a moment sort of like the Dark Knight where you think the film has ended only for it to keep on going. There are even two scenes after the credits as if this was a serious film. The actual ending to the movie is excellent though. Whether we get a sequel or not that’s definitely a great way to end it.

As mentioned though, the only thing holding this film back is the writing. Brooks is just way too over the top in how he messes with Max. The guy throws his board games away, steals his friends/car, tells an embarrassing story, etc. The film half heartedly tries to help redeem him by the end but he’s so far gone that it’s just hard to buy into. It also gets so extreme that I wouldn’t even say that these moments are funny. The board game throw? Sure that’s funny although Max should have absolutely retaliated or just left at that point. The embarrassing story? Not even remotely funny and the gag drags on.

Game Night is also fairly confident in its jokes so it tends to keep on calling back to them. For the better gags this works like Gary ominously appearing in the background many times. It’s hard…or meant to be hard to tell if he’s a red herring or not. This backfires for the more annoying moments though like Kevin’s plot where he is jealous about his wife Michelle having an affair at some point which gets brought up over and over again.

As for the characters, Max is a good lead. He has a lot of funny lines and gives the film a solid atmosphere throughout. I would argue again he lefts Brooks get away with way too much though. Then you have Annie who I would say is the standout character of the film. She was able to match Max blow for blow when it came to coming up with plans. She was very proactive and even participated in the fights quite a bit. Annie was quick to take every situation in stride and I can’t really think of any bad scenes she had. She may speak her mind rather quickly even if it means putting Max in a bad spot but at the end of the day they made a great team.

I’ve already talked about Brooks so nothing much more to be said there. He’s the kind of character who is supremely confident which can be entertaining but you can’t let it distract you from the fact that he’s practically the main villain in this film. At least I will say he put up a good fight against the two intruders in the opening scene.

Then you have Ryan who has to be the weakest character in the film. His gimmick is that he’s really not smart at all so he’s always saying things at the worst possible times. He serves as the comic relief character but you don’t need one of those in a parody/comedy film since everyone ideally will have a lot of humorous lines of their own. As a result he feels rather forced the whole time.

The date he brought to the main game night is Sarah who’s meant to contrast his character with how intelligent she is. She has some fun moments as well but in general their subplot wasn’t very strong. Next up is Kevin and Michelle who probably had the weakest plot. As mentioned, Michelle had an affair while they were on a break from each other and he also did but still says she should have not done it or at least come clean about it years ago. Super sloppy of her to mess up during the game though I have to say.

The problem with this gag is it just keeps being brought up over and over so Kevin comes off as super insecure the whole time. I’d also say they did the worst in the game and really could not keep up with the other teams. As for supporting characters, well we have Gary who has a rather tragic plot for the most part since nobody wants to hang out with him anymore. He does come across as rather odd but lying to his face and excluding him from everything is absolutely not the way to go. The film doesn’t give you enough reason to see why the main characters would treat him so poorly so you feel bad for him. It gets worse when something happens to his house. The film never addresses the aftermath of this but it’s definitely not something you would forgive very easily.

Overall, Game Night is a very high energy film. It really embraces the nature of being a sort of “Clue” type adventure but focused heavily on being a parody. It takes many shots at classic action movie tropes as the heroes try a lot of plans but they never work. The conveyer plan for example was really clever as well as the homages to the Die Hard series. The movie is certainly at its best during these moments and I also liked the actual game scenes. There’s a certain music track that plays during these moments which is really good. That said, considering the title you will find there are less scenes of the heroes playing the games than expected. It may have enough of a weak script where I wouldn’t call it a great movie or anything but if you’re looking for a fun film to check out this one’s a good way to spend an evening.