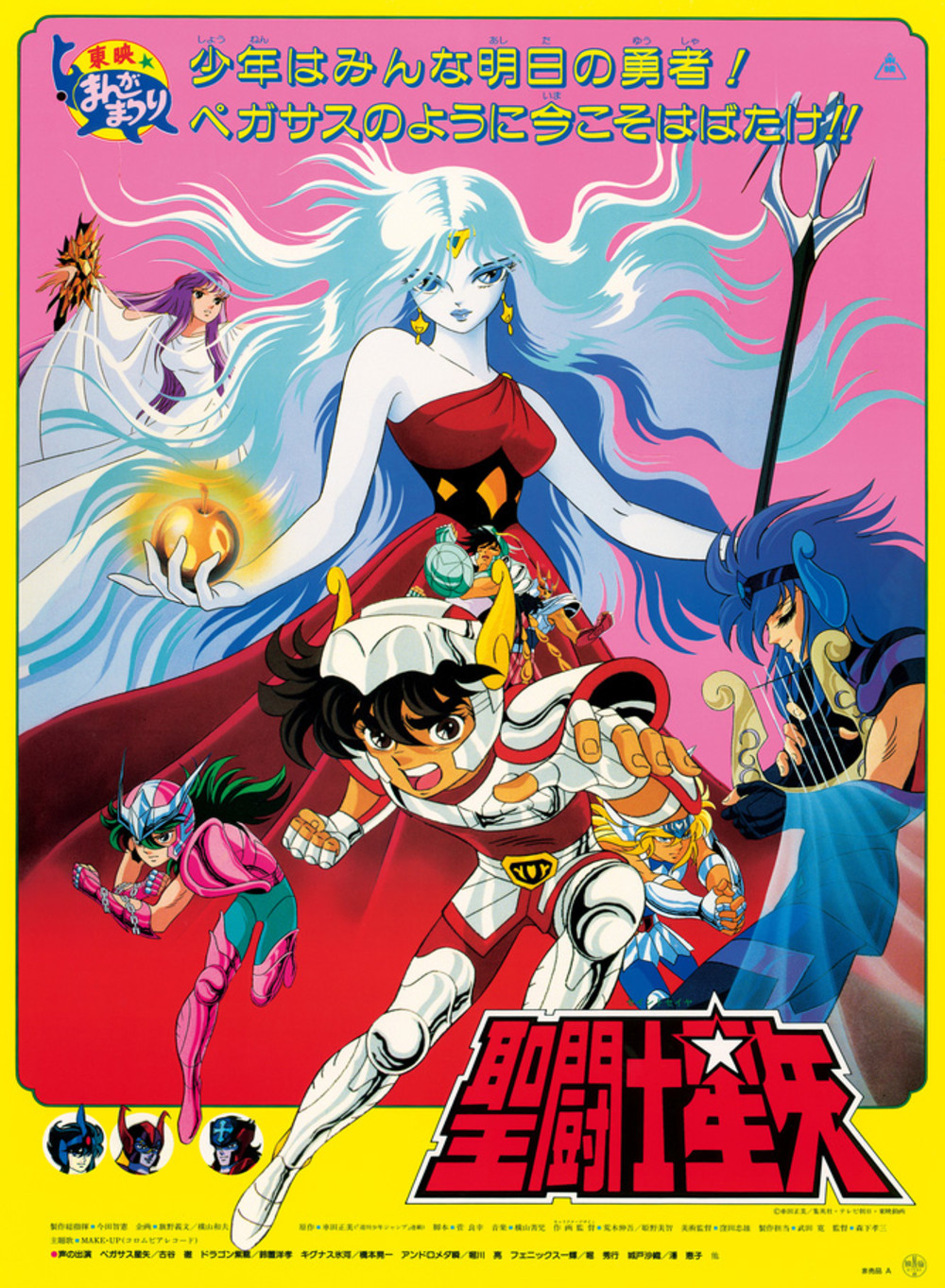 It’s time to look at the first Saint Seiya film. This was back when some films would be quite short at well under an hour and that is the case with this one. What that also means though is it gets to jump right into the action so that part’s fun. The action pretty much goes on for the entire film which is always hype. It’s a solid story that is well contained here.

The film starts with Seiya and friends enjoying a normal day at the orphanage. Hyoga and Eri even get to spend some time staring at each other. Unfortunately, an evil goddess known as Eris arrives and possesses Eri’s body. Eri then ambushes Athena on one of her horseback riding adventures and takes her away to a temple. Athena is able to resist the body snatching abilities of Eris so the villain decides to break her emotionally by destroying the saints in front of her. She sends a signal to Athena’s Knights to come and save her if they dare. Eris also summons the 4 Ghost Saints to take care of the heroes when they arrive. Seiya and friends do not hesitate as they head on over.

That’s really it for the plot because from here on our you can expect some hype battles between saints. It’s quite nostalgic seeing the heroes in this film. The movie includes the original theme song from the show and of course all of the classic tunes are here. Even the whole “A saint never falls for the same trick twice” line returns which is a classic. The heroes all have rather difficult battles but manage to overcome them as needed. The film feels like a speed run through an arc as Andromeda gets absolutely wrecked as expected, Shiryu has to drop his armor, Ikki shows up for a rescue, Hyoga lets his guard down, etc.

Of course, those are all great story beats so including them all in a film is bound to be a winning idea. Naturally Seiya looks great here. He’s a true hero as always and puts in a lot of dedication to survive to the end. He takes some particularly bad hits in the film such as hitting his head on a cliff when being thrown away and taking some seriously lethal blows. Fortunately he was able to survive these and keep on fighting as a true saint. Constantly throughout battles Seiya gets hit so hard he even loses all of his senses, even Goku might wince at this kind of damage. Just goes to show why the guy is still an absolute living legend.

Meanwhile Hyoga looks good but he does fall for the classic emotional trap. I’ll give him this, he got to have the best opening scene since he took down the car and saved a kid. In the fight he also looked good as he was overwhelming his opponent until he let his guard down. He’s typically the weakest member of the team outside of Shun but it’s more of a by default since the team is absolutely stacked. You have Seiya and Ikki at the top with Shiryu following close behind. I would say Hyoga is right under him and then Andromeda is way below the rest. I think Hyoga fans will still be satisfied since he was looking so dominant here which makes up for not having another fight scene.

It’s better than Andromeda fans at least as he goes down so quickly in this movie that he doesn’t even get to take out his chains. You would assume the guy isn’t a fighter based on how this one went down. It was more than a little embarrassing if we’re being honest. No Knight of Athena should go down in a single blow. Even in the main series Andromeda never looked quite so bad so…..ah man it must have been rough for his fans when they were leaving the theater.

Ikki looks absolutely amazing though. Not only does he step in to take that guy down but he also gets a pretty good fight against the main villain. It was actually even for a while and he was ready to keep on fighting until Seiya stepped in. I was glad to see him look so good here and it keeps reaffirming why he is my favorite character in the series. His fire attacks just look very cool and I like that unwavering confidence of his.

Meanwhile Shiryu also looks good. He was initially getting pummeled but that’s more or less part of his fighting strategy. The dragon within him gets stronger the more damage he takes. Shiryu’s specialty is stacking the deck against himself and this is completed once he takes off his armor and allows any hit against him to be lethal. Now that the stakes are so high he can really show his stuff. His ultimate move is a bit of a self destruction attack so he can’t use it often but it does always work. His sheer durability is probably the highest out of the cast. (I would consider Ikki’s infinite regeneration to be different from durability)

None of the villains are particularly noteworthy. They were all pretty good though. They talk tough, insult the heroes, and flex their powers. Basically they do everything you could want out of a villain. They may be a bit interchangeable in that sense but they all have different abilities. The one who fought Shiryu for example was really proud of his own strength while the one who fought Andromeda was more about ending his foes peacefully. At the end of the day their core personalities are similar though and that’s good since they were all impressive.

As for Eris, she can’t exactly fight so don’t expect her to get a big fight scene. Her plan wasn’t half bad though, just a little longer and she would have won. Honestly it would have been smarter not to call in the Saints though. I feel like Athena would have broken down soon anyway and then there wouldn’t be any danger. Maybe Eris just really enjoys a good fight though. Athena looked pretty bad here though. She should at least be able to defend herself a little bit right? Cmon, she is a goddess incarnate….

As expected the animation here is really good. I wouldn’t say it’s necessarily at a higher level than the show but it does look really clear. I definitely have no issues with the animation. The fights certainly deliver and the soundtrack is on point as you would expect. There are a lot of powerful songs to listen to here and each one will certainly help to enhance the scene that they’re in.

Overall, This is a quick film so there’s not a whole lot to say. Still, it’s a great adventure since it’s really like a true mini arc. The Saints split up and systematically shut down each and everyone of their opponents. If that’s not true power then I don’t know what is. If you’re a fan of Saint Seiya or just like action in general then this is definitely a great film to check out. There’s one scene with a horse that might get you very nervous but fortunately the film didn’t go the way I was expecting. Things could have spun out of control really easily and it’s still the weakest scene in the film but fortunately he was okay in the end.