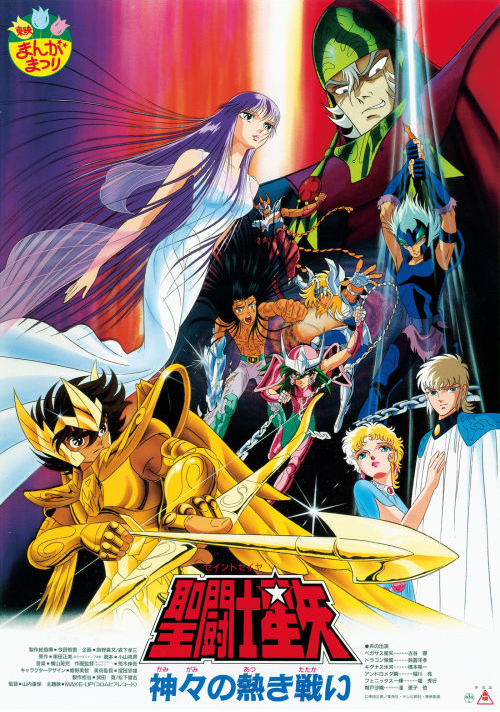 The Saint Seiya movies certainly have great posters without a doubt. This next film effectively picks up in a similar fashion to the first one with things boiling to a head pretty quickly. It’s an effective movie with a lot of great fight scenes and moments. It’s also fun seeing the Asgard fighters again after the show although of course it’s a different set entirely here. Asgard always looks pretty corrupt in these things compared to Sanctuary though.

The movie starts with Hyoga saving a guy from a group of fighters and then being sent out to do some investigating in Asgard. Unfortunately things don’t go very well for him and he is promptly captured. Meanwhile the other Saints and Athena are worried about what happened with him so they arrive in Asgard. Dolbar lets them know nobody has seen Hyoga in the kingdom. This isn’t particularly convincing though as all of his God Warriors continue to glare and insult the heroes. None of the Saints back off which is good but they ultimately head out to do some secret searching.

Dolbar sees this as a good chance so he calls Athena back by herself and quickly kidnaps her soul in another dimension and puts her on a giant boat. Andromeda must have been sleeping since he was the assigned guard but he wakes up to find her and promptly starts getting beaten down by one of the God Warriors. It’s time for the Saints of Athena to show up and turn the tables but can they really reach her in time?

We’ve got a similar format to the first film but there are definitely some key differences. For starters, Hyoga is forced to fight for the god warriors so there is the increased stress of having to fight one of their own. Additionally, the terrain is very different in the icy Asgard which is certainly fun. Andromeda looks marginally better than he did last time and the main villain can actually fight this time.

I was quite happy to see Dolbar actually step in and start fighting it out physically. This was exactly what I had been waiting for the whole time. A villain who can just step in and start taking names as soon as possible. He was quite impressive too since even Seiya was having a lot of trouble with him. Okay that may not be surprising but it is still impressive all the same. Seiya ends up needing a little extra help in much the same way as the first film in order to counter this. It’s always a great way to end the film.

The God Warriors don’t leave much more of an impression than the villains from the first film. Again, they’re all pretty good but the heroes do have to mow them down fairly quick in order to keep the film moving at a rapid pace. I would say the most impressive fighter may have been the one who fought Seiya in terms of having a lasting impression thanks to his arrows of certain death. It’s a fun concept when you only need one hit to take down your enemy. It’s a very handy skill because you can imagine how deadly that would be if Seiya was throwing that with his Pegasus speed. Nobody could dodge that.

Seiya looks excellent here as always. He takes on a bunch of injuries and keeps on ticking. All of the Saints are able to do this but Seiya is always able to take those injuries and still manage to secure victories in the end. It’s the hallmark of a true hero. Of course Ikki looked great here as well. He comes in clutch with his fire abilities and also shows a lot of determination as he tries to save Seiya no matter what.

Shiryu gets a bigger role here compared to last time since he gets to fight with Hyoga. It’s a good battle and longer than you might expect as Hyoga uses every trick possible to take Shiryu down while the dragon hero is trying to subdue him with grapples and throws to avoid hurting the guy. Definitely a fun fight and it shows how Shiryu is willing to risk everything to get his friend back. As for Hyoga, it’s a little sad for his fans that he was basically controlled into doing this but by the end of the film he was still able to make the right calls and help out. In a way he’s at a bit of a disadvantage having to fight in a cold area where everyone is already used to the ice but he makes the most of it and still ends up coming out on top and at least contributing with the final boss. We all know who will beat Dolbar in the end anyway.

As for Andromeda…well he looks better than last time as I said but it’s still not great. His chains were utterly destroyed by his opponent’s sword. What’s the point of an invincible chain if it gets broken so easily? In general the characters’ armors haven’t looked so good in the movies. They tend to shatter almost instantly when fighting the enemies. They definitely need the golden armors at their disposal consistently. Andromeda does have a key scene where he rescues Seiya though so nobody can take that away from him.

The animation is certainly good as always. It seemed like they were trying for a slightly different look at times with the fights like when Hyoga fought the bandits. Maybe a thinner, more streamlined look? Either way it all looked good and the battles were a lot of fun. The soundtrack was also on point as expected. All of the classic tunes are still around and you can really get into the action.

Overall, This was a great follow up to the first movie. I think I would still go with the first one as the best Saint Seiya film so far but it is very close. They’re both similar in a lot of ways which is good because you shouldn’t fix what isn’t broken right? Saint Seiya is the kind of series that lends itself really well to having a ton of films so it’ll be nice if they can start announcing more films in the future at some point. Just follow this format and you’ll be in really good shape. It’s definitely a must watch for any action fan.