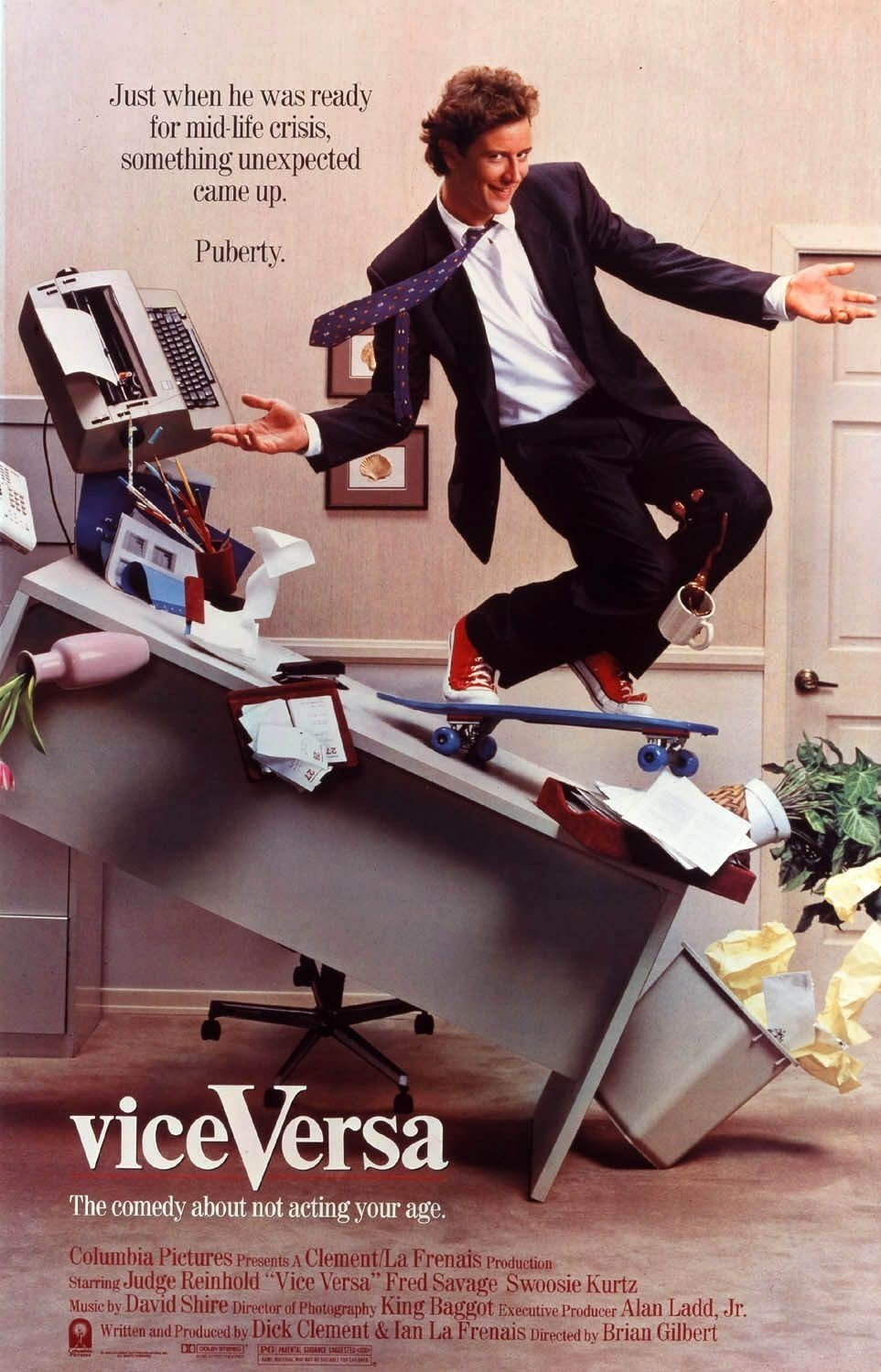 Vice Versa is a classic body swapping film so you can expect a lot of hijinks to ensue. I always like the idea of body swapping because it can make for a lot of interesting scenarios. The very premise of living a life in someone else’s shoes for example has always been a blast. I would say right off the gate the film does make one mistake here though. Nobody wants to live another day as a kid…..it would have been more interesting if the main guy was swapping lives for a day with his girlfriend or maybe a rival at the workplace. Still, this is the plot here so lets tackle it now.

Marshall is a rather successful businessman but it has come at the expense of time with his son Charlie. This weekend he gets to have Charlie since he seems to alternate weeks with Charlie’s mother. It’s going to be a grand ole time. The only damper is that the vase Marshall ordered for a work exhibition didn’t arrive because instead he got a haunted skull. The villainous Lilian calls to offer to trade the items (Which got misplaced according to her plan to fool customs) and Marshall agrees. The issue is that before this can happen he and Charlie wish they could switch places. The wish becomes true so they swap bodies. Can each character successfully live in the other person’s shoes or will they wreck everything?

Low key the scariest thing about body swapping would be seeing how the other person wrecks your life. Make no mistake, there is a whole lot of damage you can do to a person’s reputation in a day. It’s not quite something that can be easily reversed either. Both characters do a number on each other but for sure Charlie does more damage than Marshall. Not only does Charlie just generally act like a doofus most of the time with his mouth always open but he doesn’t know anything about business. Fortunately things tend to work out in his favor but that’s not for lack of trying.

Charlie wasn’t ready for this and I can’t say that I was really a fan of his. Kids tend to be a little on the annoying side in these films and even once he got an adult body I wouldn’t say Charlie fully got away from that. He continually messes up and he makes a rather significant move towards the end of the film involving a proposal that was out of line. It could have easily gone sideways and it’s hard to come back from that.

Meanwhile Marshall is the one carrying the film. Honestly I wouldn’t have minded a whole film about him at the firm because it seemed fairly interesting. As a kid he didn’t quite have the same level of intrigue and I was a little iffy about him not being able to take on the bullies at all. The whole time I was waiting for the moment where he confronts them but it never happened. That was a big missed opportunity if you ask me. The actual payoff wasn’t very satisfying since it was Charlie in an adult’s body so there wasn’t much the bullies can do.

Sam is a main supporting character as Marshall’s girlfriend but I wouldn’t say she looks great either. It’s nice that watching the metal show helped her get closer to Marshall I suppose but he was acting rather crazy the whole time so you’d think she would notice something’s up. Now, part of this is due to the fact that it is a comedy so we shouldn’t think too hard on it but I dunno. Also, she has one questionable scene with Marshall considering that he’s still a kid at this point in time and any scene with Charlie is also iffy. She’s partially a victim of circumstance I guess but she never got to be all that good. Also, relationships within the workplace always seem tricky at best.

As for the two villains Lilian & Turk, they’re okay but almost feel like they don’t belong in the film. They’re effectively the villains from Home Alone and get wrecked throughout the film. There is a pretty fun scene where they get ready to abduct Marshall only for Charlie to throw him in a car first. It looked like they were beat to the punch by other kidnappers which was a fun gag. I also liked when the coworkers confronted the about the gun.

Again, the whole film taking place at the workplace would have really worked quite well. The villains don’t leave much of an impression beyond this but I guess they added a layer of danger if they managed to take the skull away. The heroes not figuring out that they both had to be holding onto the skull seemed a bit lazy though. Why would they not try that?

The writing here is decent but there is still just something keeping it from the next level. I get the impression they didn’t really take the premise as far as it could go. When the main plot from before the switch is more interesting than the actual switch you know that you have a problem. It all boils down to the fact that throwing a kid into the mix was a bit of a mistake. There is less you can do with that since Charlie isn’t all that smart as it is. He can’t even bluff his way through scenarios as he just has his mouth open in shock the whole time. Definitely the most annoying part of his character.

Overall, Vice Versa won’t be anyone’s pick as the most influential body swap film. It’s not bad though but I guess what’s almost as important is that it’s not very interesting. It’s a very subdued film that goes through the motions but doesn’t do anything super memorable. Charlie is established as a rather unlikable character the instant he decides to stop listening to Marshall now that he’s all grown up. There was potential to be found here but it never happened. As a result I would say the film is perfectly in the middle. It’s not bad but it’s not all that good either. You’ll walk away from it without a strong opinion one way or the other. So if you want a quick way to spend some time relaxing then you can pop this one in. Otherwise you can probably find some stronger options.