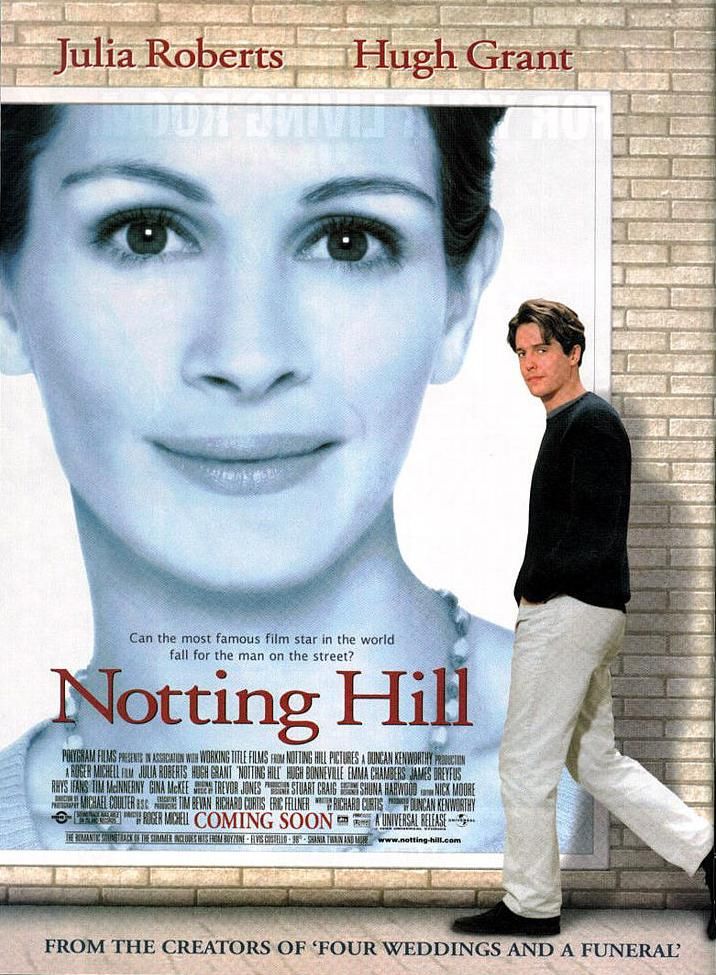 Notting Hill is one of those films where you feel like the main guy allows himself to be used a little too much. Get ready for an adventure filled with cheating, betrayal, and in general a rather unhealthy relationship that is not likely going to go anywhere. It can make for a fun watch at times with some fun accents but at other times you’ll be shaking your head. Ultimately it may have done well to have reduced the length of the movie by a bit.

The movie starts off by introducing us to William at his humble book store. He has always done all right for himself but has no spectacular memories or events that he can talk about. Deep down he has always hoped that something fantastic would happen to him. Unfortunately that just has not yet been the case. One day, a famous actress known as Anna walks into the store and changes his life. They quickly begin to have an affair and everything is going well until he finds out that he was just the side man and she is already seeing someone.

Still, it’s not every day that you have an affair with a celebrity. Anna is willing to continue anyway but can William be satisfied with this arrangement? He will have to have some serious conversations with his family to see what to do. All along he has to wonder if this is really happening or if it’s all some kind of fantasy he has cooked up.

A lot of my issues with the film do come down to William. I would say Anna as well but primarily I’m looking at William since he is so passive here. First off, I will say he can be an entertaining character. He reminds me of the Dragons from Dragon’s Den with how he tends to speak his mind in a passive aggressive sort of way. He has a rather decent set up at home and his life isn’t bad. He may not have had that spectacular experience yet but do you need one if your life is consistently positive?

Once he meets Anna is when things start to sour for him. First off, she knows him for about 10 minutes and then suddenly on impulse decides to make a move. He’s thrilled of course but also mystified. She then calls him into her office to say that it didn’t mean anything only for them to have another affair moment shortly thereafter. They go out for a while before he catches her with the other guy.

William decides to take a step back since this may not be quite right. Still, Anna shows up again and William decides to give it another try. Only this time the reporters showed up and she blames him so they split up again. He decides that he won’t fall for this again but when she is filming in town he shows up to say hey and overhears her talking about him in a rather dismissive way. He leaves once again and then she returns. This cycle keeps on repeating over and over and over again.

Perhaps if the writing was utterly brilliant this could work but I wouldn’t say the script was that impressive here. It’s not bad mind you, but it’s rather standard stuff. You have some clever moments like one of William’s family trying to give Anna acting tips on how tough the profession is before he knows that she is an actress but then you have more cringe worthy stuff like William’s inferiority complex showing in full display as he asks Anna about famous actors.

That scene involving the ice cream drags on for a day and a half. So the film’s writing is okay but it would pale next to many comedies. It’s less of an up and down ride with laughs and jokes that fail but most of a steady cruise that you will rarely find super funny but shouldn’t get all that annoying either. It’s just the endless cycle that gets really annoying because you feel like William should eventually just stop falling for the bait.

Part of why I put the blame on him each time is that he’s the one who chooses to continue going on like this even though he ends up getting hurt each and every time. It’s not like Anna takes it as hard since to her it seems less personal. Well, I’ve slammed on William a lot for now so lets turn to Anna.

It’s hard to sympathize with Anna as well because she clearly had no problem being with two guys at once. She would have continued with that setup had she not been caught. That already speaks volumes about her character. Anna just doesn’t have a lot of class in that respect. She is completely unreasonable about the reporters showing up considering that William did not sell her out. She had no reason to speak ill of William to her co-star except to try and prop herself up.

All in all, I found it impossible to root for the romance. It has to be one of the weakest ones I’ve seen in a while. These two have been hurt way too many times over a single relationship in such a short time frame for all to be well. It’s also always hard to just overlook cheating when the relationship is just getting started because you will then always have the doubt in the back of your mind. What if the other person is still cheating at this very moment? You really can’t know for sure.

As for side characters, the main one would be Spike. He’s William’s roommate and a pretty bad character. He results in most of the worst humor moments because the guy just isn’t funny. His thing is that he’s a big slob who always lets William down when it counts the most. He forgets to remember who called, how to take notes, and even rats out on Anna for a few seconds of fame. It’s easy to forget how these two could even be friends in the first place. They certainly don’t seem to get along much but I suppose the argumentive dynamic may be what keeps them together. Spike doesn’t take anything personal and William vents a lot but doesn’t let it really affect him much.

The rest of the family shows up for a while too but I wouldn’t say they were that great. William’s sister is a little too obsessed with trying to be Anna’s friend. She comes off as rather odd the whole time and the “romance” with Spike near the end comes out of nowhere. The married couple was good at least as they had a solid dynamic going and the ex-wall street investor had a lot of confidence which was good. So I guess the supporting cast was decent.

Overall, What really holds Notting Hill back is that the romance is absolutely bonkers. The characters go through the cycle way too many times. It’s also a bit laid back for a comedy film so laughs are few and far between. The best sequence of moments was when William had to interview a lot of people on a film he knew nothing about. You’d think he could have done a little better on the spot with thinking up questions but at that point he was too obsessed with Anna to think of much else. If you want to check out a film where you live through the fantasy of a rich actress deciding to have an affair with you at first sight then I guess this is the right stop. If you want something a little more realistic like finding your future wife in a data world and being tasked as the savior of humanity then I would recommend checking out Sword Art Online: Ordinal Scale instead.