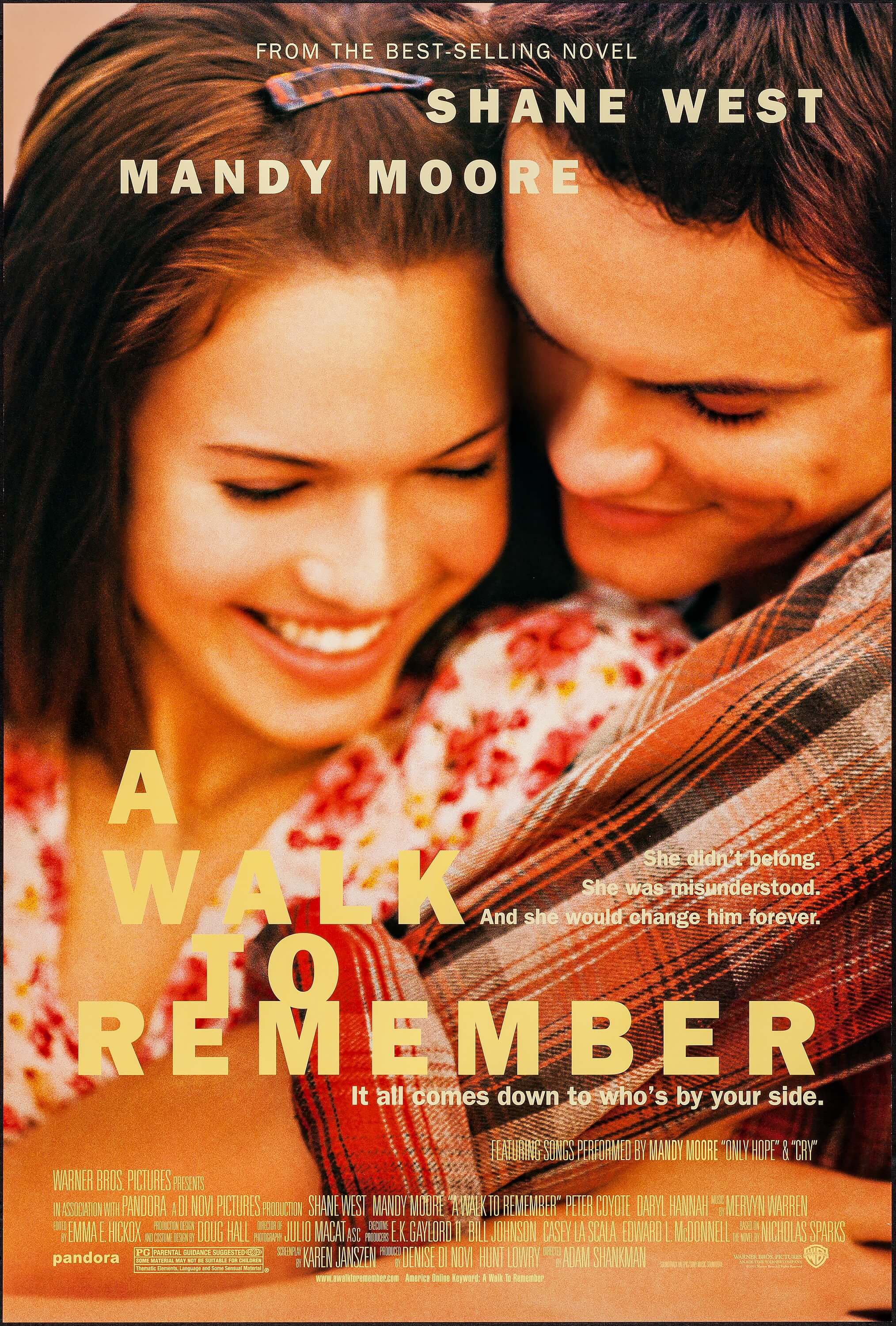 A Walk to Remember is a film that has a classic Dirty Dancing feel to it where the where the main romance seems like it can’t possibly work out. The characters are from different social circles and have barely even known each other. You can guess a lot of how this will play out from start to finish except for one big twist near the end but unfortunately it’s not a good twist. It ends up hurting the score quite a bit.

The movie starts by introducing us to Landon. He’s in with a bad group of friends who go around pranking other students and making fun of everyone. One day they injure a kid pretty badly so Landon is nearly expelled. In order to stay at school he will have to do a lot of volunteer work including being in a school play. He doesn’t want to do any of this and asks the preacher’s daughter Jamie to tutor him.

Jamie is a rather quiet girl and the nicest person at the school so naturally everyone picks on her a lot. She still agrees to help Landon out even though he doesn’t really have her back at all. He wants to be secret friends to spare his image after all. Will things end up working out between them or is Landon going to go back to his old ways as soon as this is over?

As a main character, it’s difficult to like Landon. The guy goes pretty far into being a jerk so once the payoff happens and he starts to be nicer, it’s just very deep into the film. You still have your share of doubts about him. It’s a classic character arc so of course if we got a sequel he would probably look better there but in the meantime he’s just not likable. He should have left the group of friends a lot sooner as well.

Meanwhile Jamie is a fun character. She does her best to always take the high ground and continue to try her best and ignore everyone’s insults. She gets burned quite a few times with helping Landon but continues to press on. There really isn’t anything bad to say about her as Jamie remains a consistent character from start to finish.

Where the film really messes up is it decides to add some extra drama. I suppose it’s a spoiler to say exactly what happens here, but needless to say the film isn’t going for a particularly happy ending. It’s one of those endings that negates a large part of the overall adventure. The twist really didn’t even need to be in the film. If you skip that and play out the climax straight I dare say that the film would end up being a lot better.

I suppose the twist does differentiate it from other films in the genre but it’s not worth it. The rest is pretty straight forward as Jamie works on redeeming Landon and getting him to appreciate life a bit more. He goes from just taking everything nonchalantly to actually being serious about life. That part of the film will still work quite strongly with or without the twist.

Jamie’s faith is also a key part of the film since she is quite devout in her faith. She counters her father’s arguments against getting close to Landon by using scripture as well. That said, you don’t blame the father for having reservations. He knows Landon fairly well from being a preacher in this town for so long. While of course he won’t rule out the possibility of Landon turning over a new leaf, he naturally wouldn’t want to take a chance with Jamie getting hurt. Worse than the emotional risk would also be if Landon were able to take her away from her belief in God, corrupting her to the more worldly side. Ultimately I would say he was reasonable, it just took him some time to come on board with this.

The rest of the kids at school were all mostly petty. They do their best to try and cause trouble for the two leads by messing with Jamie and trying to hurt her reputation at school. It’s all classic bully stuff and you can tell that it’s not the nicest town to be in. Of course, that’s par for the course with most schools we see in these films so that’s rather normal.

This film is primarily a romance I would say but ultimately that would still be one of the weaker aspects of the movie. It’s just hard to buy into the romance because these two characters don’t really know each other like that. It’s only been a little while since they first met up and you have to also account for the fact that Landon was a jerk for the early scenes. By the time he begins to thaw out we’re already fairly deep into the movie.

A Walk to Remember also pulls out the classic moment of “Don’t fall in love with me” as Jamie tells Landon this but he quickly disregards it. As soon as those words are uttered you know that the friend zone is about to crumble. It’s a shame because you could have had a really good friendship dynamic here that would have worked well. That would probably not have overpowered the ending but it would have been a good move.

Overall, the writing is solid and the pacing is on point. I may be misremembering but I think there was also a good song or two that played at one point. On the whole it’s a good film if you can just get past the ending act. The problem is that the ending is a very important part of any film as it will have a lasting impact that is hard to forget. While it may not always be enough to destroy an experience, it can certainly weaken it. The film drops a few stars for the ending because it’s just a bad one that doesn’t give you that climactic final scene you’re hoping for. It doesn’t end the film on a high note so if we ever get a remake I would definitely say to change that scene. Maybe make it so the miracle referenced in the film isn’t about Landon, but about Jamie instead.