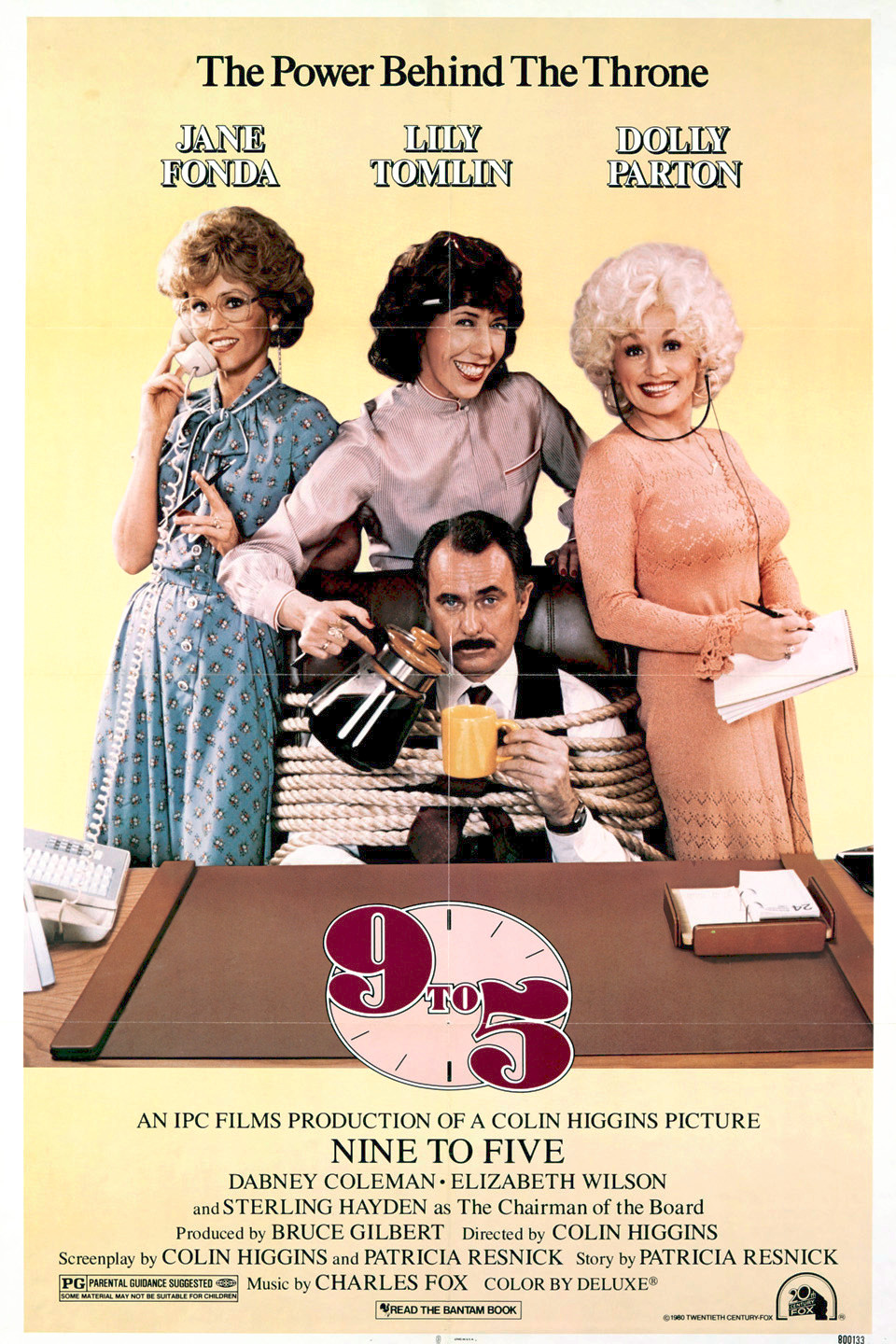 You can definitely chalk this up as another film I had never heard of before watching it. 9 to 5’s got a fun setting since it takes place in a classic corporate job where the boss is rather corrupt. It’s a comedy that goes all out and embraces how crazy the story is. Ultimately this works out quite well. While I wouldn’t say it quite stacks up there with the best comedies, it has a lot of fun moments.

The movie starts by introducing us to Judy who is starting her first day at work. She is quite excited although her colleagues are not exactly thrilled at getting a new hire in. After all that is a spot that someone from inside the branch could have taken as a promotion. The person training her will be Violet. Violet’s been at the job for a very long time and is hoping to get the next promotion. She’s not exactly a happy camper but at this job there is little reason to be. Violet is playing nice since she wants the promotion but if she is not picked then there are going to be problems.

Finally you have the third main character Doralee. She is the boss’s secretary and has to put up with a lot of Franklin’s antics. She needs the job so she usually looks the other way and just makes sure Franklin never goes too far. Unfortunately nobody at the workplace likes her since it turns out that Franklin’s been spreading rumors around that they’re in an affair. Finally, the three ladies have had enough. They need to take Franklin down but how should they go about it?

The movie makes sure to paint quite the picture about what a bad boss Franklin is. Think about the worst boss you’ve had and then keep increasing the extremes. He constantly harasses Doralee and always takes credit for other people’s work. He is extremely quick to fire his workers even over something like gossip. The guy is massively obsessed with having power and of course he also steals from the company. Like I said, they go all in with how this guy’s a total villain.

So you’re not exactly going to sympathize with him once the main characters decide to start taking him down. He does make for an entertaining villain minus the Doralee scenes though. The guy is quite determined and does come up with a lot of plans. You certainly can’t say that he’s the type to give up at least. He also does put up a fairly good poker face when dealing with people who don’t know the truth about how he controls the place.

From the 3 main characters my favorite one was definitely Doralee. It’s fair to say that she was the most sympathetic character here. It’s no fun to have everyone exclude you, especially when you have done your best to be quite pleasant. This even includes the other main characters who believe the rumors and don’t make any attempt to get to know her. At least the others always had company so that’s why you feel the most bad for Doralee.

Especially considering that she was still keeping her integrity despite all of the external pressure. Doralee also had a gun which is very handy to have in these things. It certainly came in handy for keeping Franklin at bay. Then we have Judy who in some ways you could say has the largest focus although it’s close between her and Violet. Considering that she has just started at the job and is quite nervous I would say she does really well here. It’s natural that she makes some mistakes but she makes friends quickly and then is able to help out in the adventures.

Finally you have Violet who gives the film a lot of energy. The whole situation really starts to heat up because of her intervention. Grabbing poison from the store is quite the way to go about it even if it was an accident. The labels on both boxes were incredibly similar so you could see how the mistake could happen. Violet does tend to panic a bit more than the other two. She may be the most in control at the office space but outside of that the other two seem to adapt quicker.

There are a flurry of side characters as well even though I wouldn’t say any of them are particularly big. For example you have Franklin’s spy who spends a lot of time in the rest room just to try and gather gossip to give to him. She is absolutely desperate for his approval to a rather crazy degree. You also have Franklin’s wife who appears to be quite dense in this film. She doesn’t notice his incriminating behavior and buys whatever he is selling. Perhaps she will start to pick up on things if we ever got a sequel to this film.

Then on the flip side I would say the Alice in Wonderland/Snow White one wasn’t quite as entertaining. Finally the Doralee dream was the least amusing in part due to it seeming to drag on a lot. Not to mention I wouldn’t say Franklin was quite as badly off in that one. That said, I think the true intent of that dream was also to show us more of what Doralee has had to put up with the entire time without having to actually put her in those scenes. Her revenge in a way is just flipping the way he had been acting the whole time.

Then you have some of the hospital hysterics which can be amusing but go on a bit long. In general I would say that’s the film’s weakness which is that some of the jokes do tend to overstay their welcome. It’s the difference from being a good comedy to being a great one. There are no negatives nearly serious enough to bring this film down from being a good one though. At the end of the day it properly hits on all of the essentials such as being entertaining, having likable characters, and containing a good ending.

The credits have a bit of an epilogue for each of the characters which is nice. One character very nearly got off a bit too easy but this fixed that right up. In general the ending is quite busy with a lot going on in the right ways. It’s really a satisfying ending for all parties involved.

Overall, 9 to 5 is a solid film. It’s definitely a comedy title that I can really recommend to any fan of the genre. It does a good job introducing all of the main 3 characters and they each even have a tiny supporting cast that appears for their origin of sorts. (In Judy’s case her character appears near the end) Not every scene may land such as the group deciding to smoke some marihuana but then you have the more epic scenes such as the shootout and general office moments like Franklin’s chair not working very well. It ends up being a solid all around mix of fun.