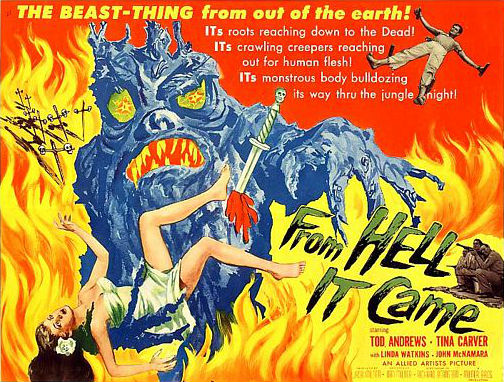 With a title like this you are definitely ready for quite the scary film experience. That said, the monster itself takes forever and a day to show up. For the most part this plays out more like a classic drama of sorts. I don’t know, the genre would be hard to pick. I wouldn’t call it an action or adventure but slice of life doesn’t seem quite right either. Well, once the monster shows up then it’s fair to say that this goes into full creature feature territory I suppose.

The movie starts with a tribe getting ready to murder one guy. This guy had been accepting medical treatment from the Americans which is a big no no in the tribe. Before they execute him the guy says he will come back to life and curse them out. In particular there are 3 people he wants revenge on. His wife who lied to cement his death, The Chief who ordered his death, and the Witch Doctor who framed him. The tribe doesn’t believe he will come back but just in case they bury him deep underground. As long as nobody takes him out they should be safe…

We then cut to the scientists who haven’t been having a great time on the island. The natives don’t like them after all so they live in perpetual danger. Additionally, they don’t have a lot of good food here so they have to survive on rations and sub-par coffee. Still, they continue with their quest to heal all the natives from the plague. Two of the scientists decide to trample on the sacred burying grounds because “Who’s afraid of a few superstitions” as the girl says. This gives the dead guy some energy though so he emerges as a small tree stump that is glaring at everybody.

One of the doctors says she absolutely has to save this tree since as a professional she must save all lives. The tree has a heart beat after all. The other doctors are dubious but concede so she uses an experimental drug on it. This allows the monster known as the Tabonga to finally regain his strength. He turns into a tree monster and starts going about getting his revenge on those who wronged him. Can anyone hope to stop him?

Now, it may be easy to make fun of the Tabonga right away since he has a lot of weaknesses. He is exceptionally slow to the point where a small child could probably outrun him for a long while. Then you have the fact that his arms are rather small so he doesn’t have a long reach. The monster’s also not that big so the only thing he has going for him is a good amount of strength. Once he grabs onto you then it’s game over but it’s hard to get to that point.

So I guess part of the fun in the film is seeing how he will actually grab his victims. Naturally one of them trips but see even tripping wouldn’t be enough for this guy to catch you. So naturally the guy trips on a rock so he keeps rocking back and forth as he moans about his head. this allows the Tabonga to catch up to him and finish the job. For another character she got her knife stuck on a tree so she spends a while trying to pull it out without realizing that the Tabonga is there. She basically falls into his arm and then faints which allows him time to finish the embrace.

The Tabonga just isn’t impressive as a serious villain but he can be a fun one. The design is absolutely unique so you won’t be forgetting it anytime soon. I do think he should have appeared a lot sooner though as it takes so long for him to appear at all. I want to say over half the movie finishes without him and it’s a short movie as it is.

As for the human characters, well I won’t save any of the tribesman were that good. The Tabonga’s wife was a traitor from the get go and didn’t seem to have much of a plan. She is promptly betrayed as the cycle goes on and then isn’t even able to finish off her opponent before the Tabonga appears. The witch doctor is certainly on the annoying side as well. He does manage to take the Tabonga down for a bit but you’re just waiting for him to go down. At least there were two islanders who were willing to embrace the science that the Americans brought.

Then you have the main scientists. There are quite a few of them on the island. The main one would be William who doesn’t take the trees seriously. His cures have been working but a lot of people don’t believe them. He steps up when he needs to and works as a reasonable main character. There really isn’t too much to him beyond being a nice guy though. Then you have Dr. Terry who is the one that brings the Tabonga back to life. You can’t really blame her for wanting to save it but I do think the heroes should have kept someone on guard duty at least. We know nothing about living trees so you should take every precaution available.

Clark was another scientist and probably the most rational at times. So there’s a scene where the main characters wake up after their nap and see the lab in ruins. The other doctors immediately jump to the conclusion that the tree must have come to life and smashed the place up. Clark addresses the elephant in the room though and says instead of leaping to such crazy conclusions what if the natives just broke in and wrecked the place?

The crazy thing is that it was the tree that did it of course, but why would that be anyone’s first guess? Clark’s made the most sense by far but everyone pretty much dismisses it. So much for that I guess. Finally you have Mae who nearly dies early on but managed to just make it to safety in time. She talks a whole lot and has a certain sense of bravado that the others can’t match. She apparently had a pretty good business on the island trading jewels and materials for a lot of money. So things have gone well for her but you’re almost surprised she has lasted so long on this island. Her two husbands were evidently not quite as fortunate so the next one better beware.

Overall, From Hell It Came is a fun enough film. You can’t take the living tree all that seriously but that doesn’t bring down the overall movie experience. The writing is pretty solid here and it’s over in the blink of an eye. The execution in the opening scene is a little intense but after that the film is rather tame. The cast of characters hold up well and this is a film that really captures the essence of the creature feature genre. The characters must all gang up to take this guy down or they are finished. We have supernatural elements and even a bit of a mystery as the heroes figure out how to stop him. If you like this genre then this is a good movie to check out. It’s not all that well known but perhaps that will change if it ever gets a sequel.

2 thoughts on “From Hell It Came Review”