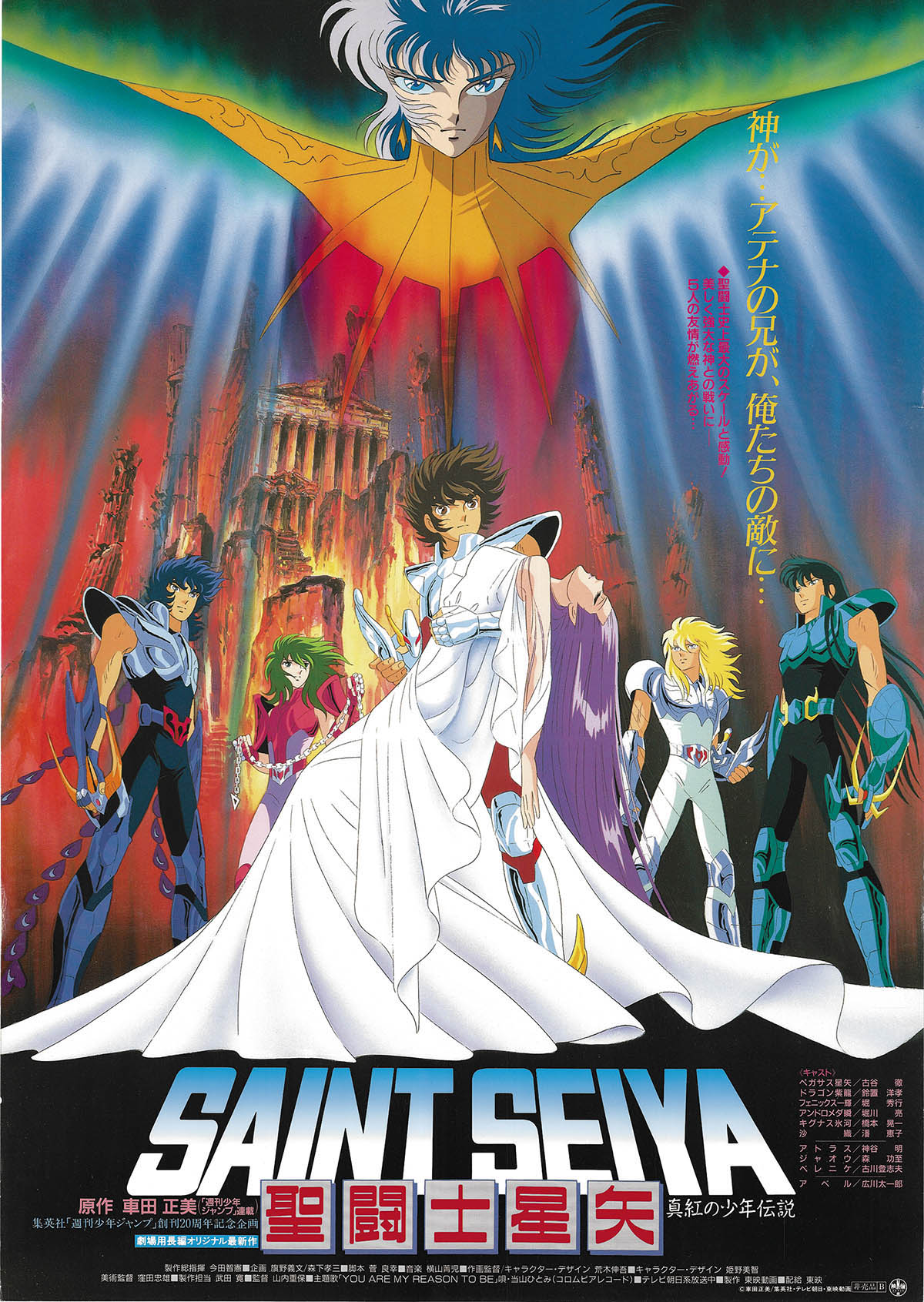 The Saint Seiya crew returns once more for another great film. The movies have been quite consistent in quality and this one is no different. With the extended run time we also get to see quite a lot of extra action scenes here. Some characters look a little suspect of course but ultimately you are bound to have a good time.

One day Abel returns to the world. He is the god of the Sun and Athena’s long lost brother. His abilities are pretty much invincible and he also has 4 Corona Saints working for him. As a result, he says that Athena no longer needs her bronze saints to defend her. Seiya and the others are outraged at this but Athena confirms it must be this way. She doesn’t even bat an eye when the main Corona Saint beats Seiya to a pulp and even the Golden Saints who had been slain have returned to offer their allegiance.

After the Bronze Saints are gone and Athena is sure that nobody can protect her, she offers one of the worst attacks I’ve ever seen as she tries to defeat Abel. He quickly murders her and then his Corona Saints murder the only 2 Golden Saints who were brave enough to try and defend her. With Athena on her way to hell, Seiya and pals must once again don their armors in order to save her. Still, they are going up against foes who have even defeated the golden saints with ease. Do they have a chance?

I’ll go into the positives in a minute but I just have one negative with the film which is that the plot makes Athena and the Gold Saints look absolutely horrible. Athena is the main culprit here though. So her long lost brother shows up and after hanging out with him for a few hours she is ready to discard her saints entirely and just follow his rule? She doesn’t object when he beats up her friends via proxy? The guy is so corrupt it’s obvious and she seems to know it but decides not to make a move.

It’s almost worse that she decides to attack him later since we find out that she knew he was evil all along. The reason she waited is she thought Seiya and friends would get murdered by him. She should know they would try to avenge her anyway so that would be even worse. Even more so when you realize that there were 5 Gold Saints with her at the time so Seiya would have had some backup. Her plan was just nuts and she dies without even putting up a fight. Athena has to be the weakest cosmic being in the series.

Then you also have the Gold Saints bowing to these Corona guys and refusing to do anything. At least 2 of them rose up to try and defend Athena but naturally they were absolutely crushed since it was 4 against 2. It’s nice that they acted but it was too little too late. They should have been helping Seiya when he was getting pounded, particularly as it seemed like Seiya would have beaten his opponent if not for Athena stopping him.

There’s no defense for Gemini Saga and the others though. Just standing by as their allies are being beaten is the height of disgrace. Their armors should have shattered in disgust as they went to find a new owner. So the story itself feels very forced and there were many better ways to set this up. At least once we do get to Seiya and friends storming the temple then we get back on track.

Once the introductions are over then the heroes quickly march on to take these guys down. Seiya in particular looks great here since he didn’t wait for any kind of explanation and just went right to the action. Now, he was filled with self doubt so he tended to lose a whole lot here but at least he always got right back up. He’s not the kind of character to back down from a fight and he got the job done in the end.

I think fans of all the bronze saints should be satisfied here. Shiryu was the one who found out the method to save Athena and did well in taking his guy out. He even let the opponent get a false sense of security so he could confirm his theory about Athena. Hyoga flat out defeated one of the Corona Saints in a fair fight which was very impressive and was also one of the first ones to reach Abel. Of course that was partially because they let him.

Shun got beat real quick in his fight but that is to be expected. After getting saved he was at least able to assist Seiya near the end by stopping one of the opponent’s blows. It may not be perfect, but you can see some improvement with Shun. Ikki looks great here as he naturally takes his guy down. If not for a cheap shot he may have been able to do a whole lot more as well. I admit that I would have liked to have seen him take on the main villains more though.

As for the Corona Knights, they make for fun adversaries. The main one, Carina had a really good fire attack that the animators clearly had fun with. Effectively his flames burn you from the inside out so it looks like the character is expanding from the hot air. You can feel how painful that attack has to be. Others had electric wires which were also deadly and a nice variety of attacks. As with most of these films since it is a whole group introduced here it is hard to really remember any of their names in particular. Additionally their introductions are long since they also say where they are from.

That said, each villain is good. I wouldn’t say any were underwhelming. The evil Gold Saints were also good opponents even if they didn’t learn anything from their last defeats at the hands of the saints. I would have liked Gemini Saga to have done a little ore but I suppose taking on one of the Corona Knights would have to suffice. Perhaps he should have let his evil side out a bit more and then he could have really taken the fight to these guys.

The animation here was really good as you would expect. The fight scenes really shine and the armors look very sleek on the characters. Saint Seiya is one of those titles you really watch for the fun fight scenes and they always deliver. You can probably tell how most of the fights will play out since Saint Seiya is a very formulaic series but it doesn’t undercut the raw determination that each character brings to the table. The music tracks also fit right in with what’s going on.

Overall, Saint Seiya delivers with another great film. The climax even tries to go a bit more high scale than the last 2 films which is good if you like the other Saints as well as Seiya. Ikki’s role may be a bit smaller than the first two films but it’s satisfying. I had my issues with the plot and Athena as she continually disappoints but the main Bronze Saints all look good. It’s nice to see how far they’ve come from the old days as they now take on opponents who were easily crushing the Golden Saints. While the gold fighters may not have looked great here, I do like the idea of getting them in on the action a bit. It really helps to solidify these new guys as true threats.