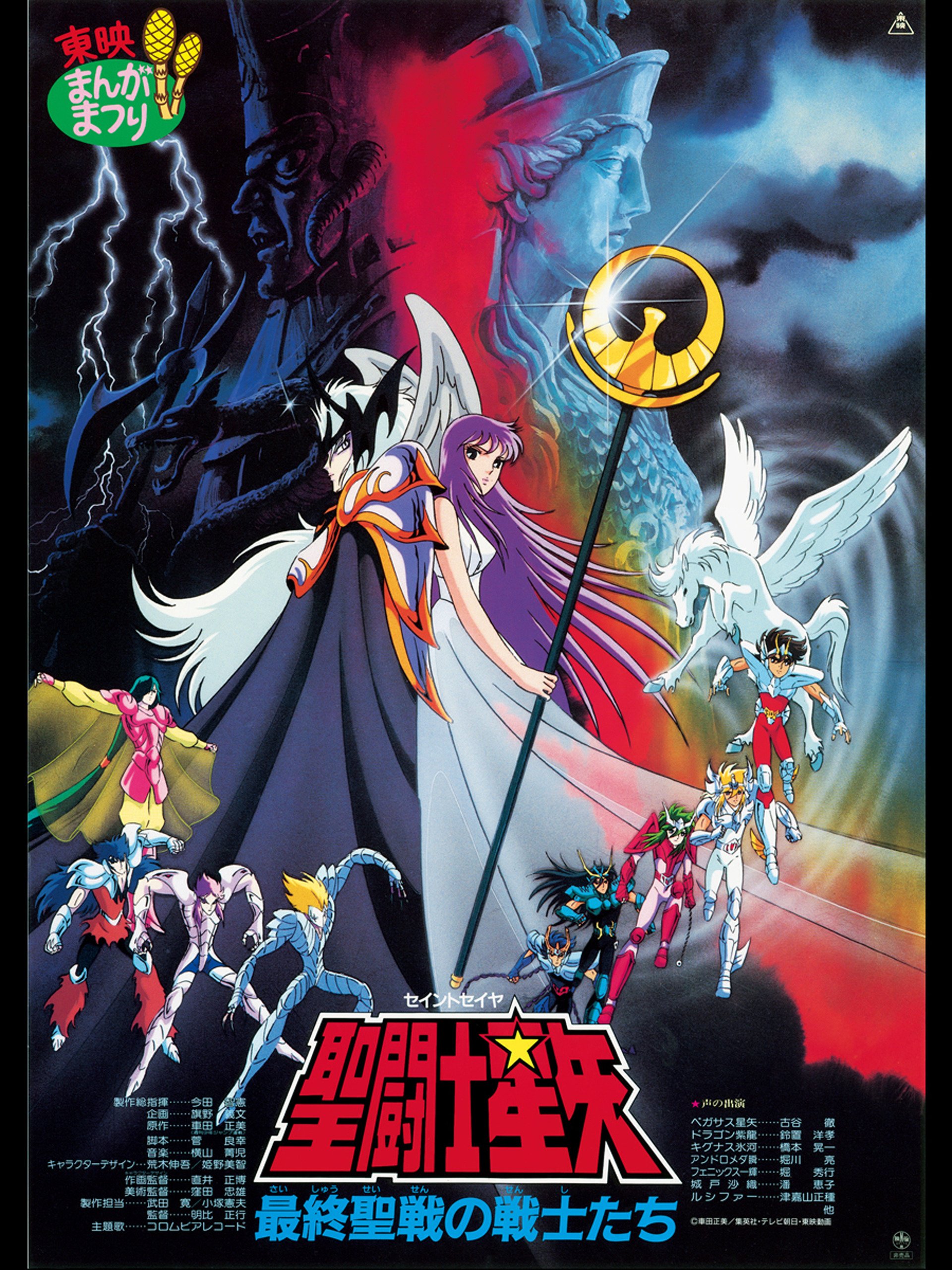 Saint Seiya returns once again to fight their most powerful opponents yet. If you’ve seen the first three films then you know you’re about to see another epic installment in the franchise. Athena may not look great here but she has improved quite a bit since the last film. This one’s back to being a bit on the shorter side but it cuts right to the action so you’re still going to get a lot of epic battles.

The movie starts with a bang as Lucifer has been resurrected. He sends his minions to go and take down the Gold Saints first. They quickly murder each one in an instant and then after that they go with Lucifer to take Athena down. Athena is unable to stop these guys and even Seiya and friends are defeated. It all just happened so fast and now the world is in ruins as towns are being flooded and cities are being destroyed. Lucifer gives Athena once chance to save the world. She will have to walk over to his throne across a valley of thorns and sacrifice herself so that the world will live. Athena has decided to do this but her Saints aren’t thrilled at the prospect. They’ve decided to rise and fight against this guy.

Shiryu missed out on the initial battle involving the main saints so he is the only one still at full power while Seiya, Hyoga, and Shun are already at death’s door. Of course Ikki also wasn’t there but he never is. Due to this, Shiryu actually gets some of the best scenes in the film such as taking on two of Lucifer’s minions at the same time. Considering how these guys handled the other Saints so easily, it was a pretty intense moment. We also got to hear him say the catchphrase “The same technique never works on a Saint twice” which was hype.

Shiryu fans will definitely enjoy his appearance here as I would say it is his best appearance across all of the films. Then you have Shun who gets beat as usual but I suppose he did hold his own for a bit. The issue is that his opponent could literally slice through his chains without any effort which is an issue. Not much you can do if your chains aren’t strong enough to defend with right?

Ikki naturally gets to step in and look good though. Again I would say his role here is rather small but he takes his opponent out pretty quick with his illusions which is always fun. It’s clear that his abilities are near the top when it comes to all Saints around the board. There’s not much to complain about when that’s the case since I suppose he would end up stealing the show if he was there the whole time. He has a pretty hype scene where he tells Shun that he needs to get up on his own though.

Hyoga also looks good here. He may not stand out as much as in the last film since he got such a big focus there at times but he takes on his opponent and looks quite good. Then you have Seiya who definitely looks great here. He doesn’t back down and isn’t afraid to give his opponents some attitude as well. It doesn’t matter if it’s Lucifer or Hades going up against him, Seiya always fights hard for Athena. He gets to unleash his Meteor Fist and of course takes out his trump card near the end.

Compared to the last film which was going for more of an ambitious setup, I would say this film is really going back down to basics. Athena is defeated/put in a position where she will die soon so the heroes have to save her as soon as possible. We get the big fights as the heroes near the end and then the climax has arrived. There are really no side quests or anything to distract you.

That said, if you think about it some more then the Gold Saints look pitiful once more. When even Virgo Shaka was taken out in an instant I had to shake my head at that. I mean…I guess you could say since it was 4 on 1 that if they go all out from the start even Virgo would lose but it’s hard to see it being that quick. Lets say we take it to be fact that all of the Saints are massively faster than light so that one instant was actually a few minutes of their time in battling. Couldn’t Virgo have landed any real hits or something? I don’t see him calling for backup but the guy was always shown to be one of the most powerful Saints so losing just like that was hard to buy.

It is an effective way of building up hype for the new villains though. Since the heroes surpassed the Gold Saints in Arc 1 I am fully comfortable with them defeating the guys who beat the Gold Saints as well. That tracks for sure, but why didn’t some of the other Gold Saints arrive to help like Roshi? At least he could have offered some kind of assistance. Athena really needs to fire all of her Gold Saints since they never help her anyway.

The animation is very solid as always. It doesn’t really use any super cool effects like the fire blasts in the last film but it’s all very consistent. Ikki’s illusion was certainly fun and all of the battles have a lot going on. Keeping up with the close range blows and projectiles is fun. The choreography here is definitely on point. As expected the soundtrack also delivers the whole time as well as it amps up the battles.

Overall, Saint Seiya continues its run of solid films. You do feel like there’s not much of the Earth left to save by the time Lucifer is done with it but I suppose that’s at least something Athena and her magic can work out. At least it gives her something to do when all is said and done. Since the series uses all kinds of inspirations from around the globe for each set of villains it was fun to see a Biblical interpretation here. Lucifer certainly makes for an intimidating villain in that sense and existing in the same series as Hades will naturally have you wonder which fighter is stronger. If you like action films then you’ve definitely got to check this one out. It’ll give you all the fighting you could ever want with the characters inspiring you as they get up after each hit.