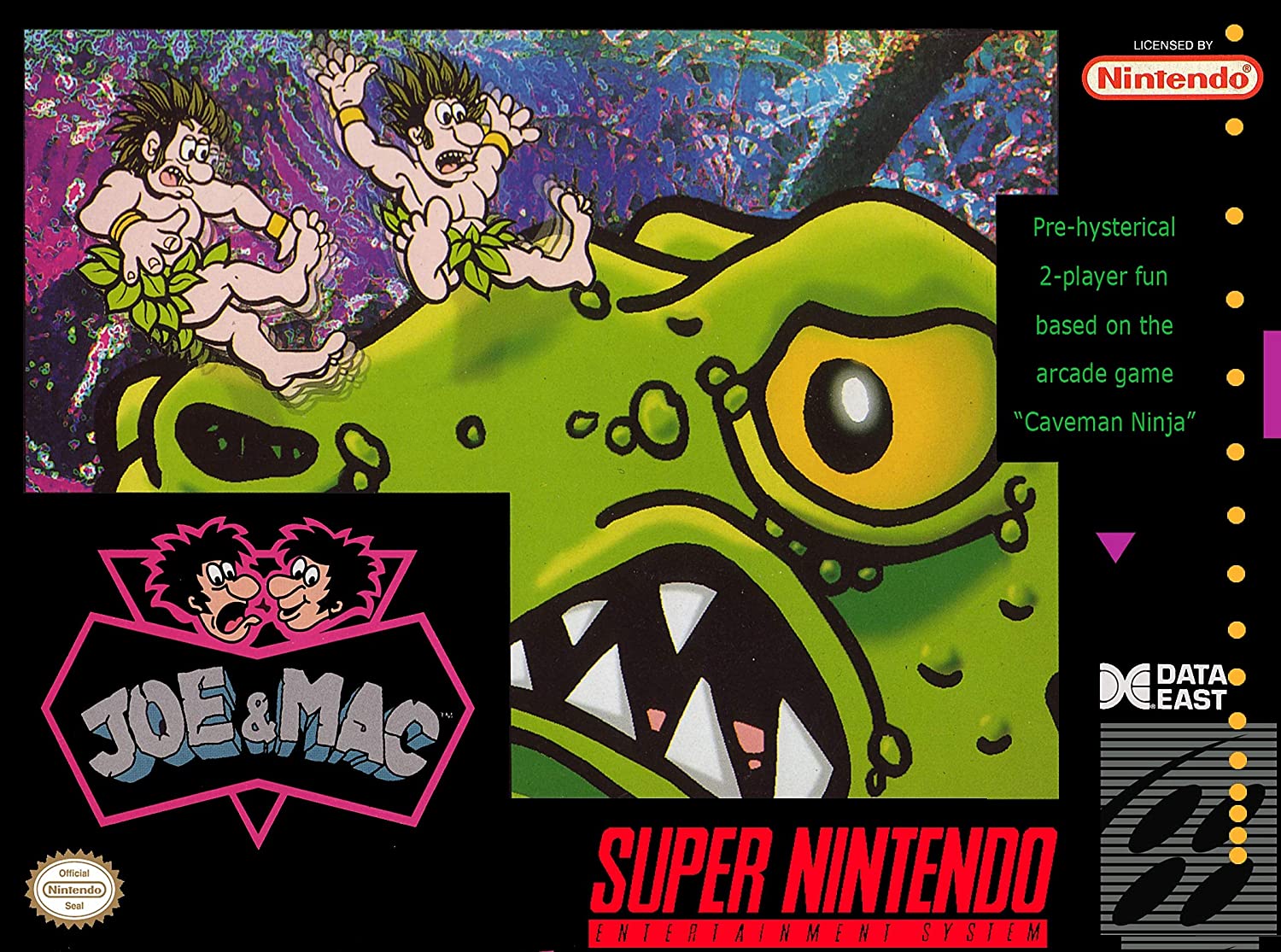 It’s time for another platforming adventure. Joe & Mac is essentially the bargain bin version of Mario and Luigi but it actually holds up a little better than expected. I’ve played my share of caveman type adventures over the years and this one is a lot smoother than the competition. It’s fairly short and never really threatened the bigger players but it makes for a fun little playthrough.

The general plot is that a bunch of giant animals and a wizard have kidnapped all the cavewomen in the tribe. Joe and Mac must now head out to save them. Each level has you defeat a giant dinosaur/creature at the end and you save one person at a time. There are 10-13 levels in the game so it’s fairly quick since each level is around the length of your average platformer. Watch out also as you don’t get unlimited game overs. Lose all your lives too many times and there is no way back. Instead you will just have to endure your defeat.

Of course as this is on the Switch Online you are able to rewind as needed so you should never be in any true danger. Just be ready to back out at any given moment. Some of the bosses can be rather intense although at the same time I would also call them easy to exploit. Just hide under the head a lot of times and they just can’t reach you. Pretty good deal right? Occasionally they will mix things up a bit so you just need to be able to react and get out of there as soon as possible.

When it comes to the graphics the game certainly looks good as you would expect. The stages look solid and there’s a lot of variety throughout the game. The enemy bosses look good but they do tend to reuse the same bosses a few times. Since the game is so short this is very noticeable. The game probably won’t last you much longer than an hour so when you see the same boss it’s impossible to miss.

Now when it comes to the main characters I wouldn’t say they are very likable but this is the kind of game that’s not really character driven anyway. You should be able to just completely ignore them as it is. The gameplay is what you’re here for. Come to think of it, I haven’t really gone into the gameplay yet so I should do that now.

It’s a classic platformer where you have to jump and smash your way to the end. You have a club by default but you can unlock various power ups based on the items you pick up from a box. This includes boomerangs, stone discs, and even fire balls. The best item here is definitely the throwing stones. You can spam these and they deal a lot of damage. I highly recommend holding onto these as long as possible. That makes things tricky if anything because you will want to actively try to avoid the other power ups which is a little different compared to the other games.

It’s an odd feeling when you are trying to not allow yourself to get power ups. It’s not too hard to avoid them though so you should be good. As for the minions, it can be difficult to hit them without taking any damage so keep that in mind. Try to stay from afar or even skip them if needed. They don’t drop food all that often after all so a lot of times hitting them is really just putting unnecessary risk on yourself the whole time.

This is really why the game stands out. The gameplay actually feels like a big Nintendo game. The controls are very responsive. The only thing that takes some getting used to is how the characters keep their momentum when jumping. It can be a little difficult to stop on a dime or change direction. It’s not a bad thing per say, it’s just not quite what you’re used to in a platforming title. Once you get the hang of this then you are definitely set for the rest of the way.

Due to the straight forward nature of the game there isn’t a whole lot more to talk about with it. It would be nice to see this game get a sequel I suppose but at the same time since Nintendo can easily make a high quality game they may as well make a whole new franchise with this style of gameplay. The caveman era never really made for the most interesting saga if you ask me so changing things up would definitely be for the best.