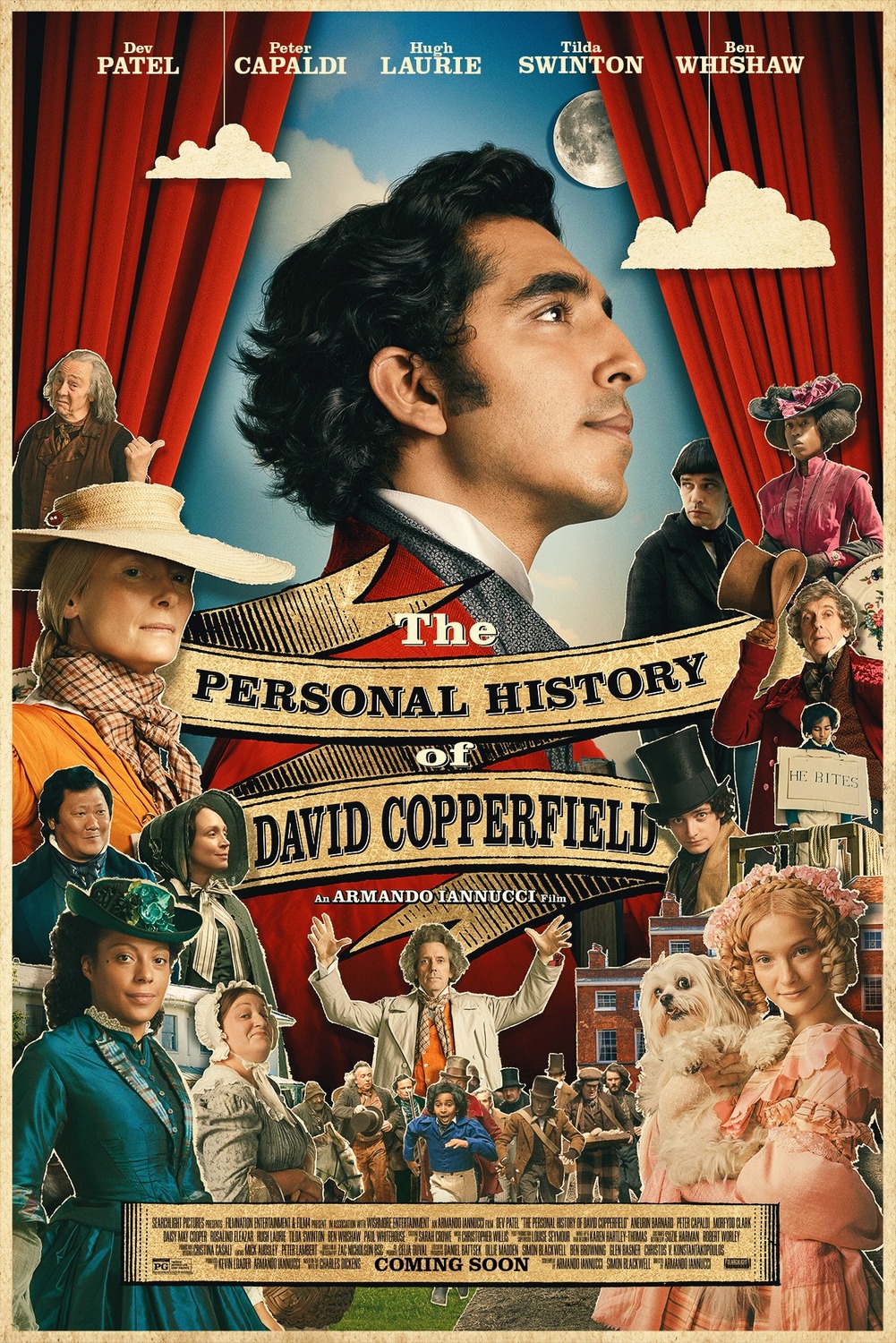 Time for a film that I guess I would call a slice of life but it also has a decent amount of tragedy and drama for the main character. There’s a lot going on here as we go through Copperfield’s whole life and the visuals are interesting with how the past blends into reality. Ultimately I wasn’t really a fan of it though, quite a few of the characters kinda seemed nutty and Copperfield didn’t make for the most interesting character.

Copperfield started out as a kid who had trouble reading because the letters were always flying all over the page. By the the time he would track them down it was too late. His mother ended up remarrying to some other guy after his Dad passed and the Step Dad was not a fan. This results in David getting beat up quite a bit before finally managing to be sent off. He escapes and works at a bottle factory for a while but then he finds out his mother has died and he goes off to live with a crazed writer who thinks he is a dead King and a nice old lady who really doesn’t like having any animals on her porch. Perhaps now David can start a new life and even get people to think he is rich.

A lot of times what gets David into trouble is the fact that his web of lies grows too large. He continues to spin the truth around for the sake of his reputation to the point where he isn’t really able to keep it straight. He has to continue to double down in front of everyone over and over again until it catches up with him. His friends also aren’t the reliable sort. You have one guy who is on the run from all kinds of tax payers and then you have a fellow student who is not the nicest guy and serves as a bad influence.

Even the butler can’t be trusted as that guy evidently wants to be in a position of power so he can gain revenge on all of the people who weren’t nice to him back in the day. Instead of being a good person otherwise he grows completely corrupt. So it would seem that no matter where David goes, there is always trouble around the next corner.

So lets talk about these guys. For David there’s not a whole lot more to be said. He’s very busy trying to get everyone to like him as a scholar to the point where he has to make up stories about it. I wasn’t a big fan of his. He gets a romance plot later on in the film but I wouldn’t give that one a big thumbs up. Romance is the last thing he had time for considering everything that was going on.

Mr. Micawbar is the one being pursued by the taxpayers and it’s hard to sympathize with the guy since it does appear that he is willingly scamming everyone. Sure, tough times and all but he’s just digging the hall bigger and bigger. Then you have Mr. Dick who is the guy that is slowly going insane. The whole flying a kite idea was certainly interesting. I’m glad it worked but unfortunately it was only temporary which means they would have to continue doing that forever in order for it to work. Hopefully eventually he is able to just overcome the spirit of King Henry.

Betsey was a good supporting character. At least she was taking things in stride and seemed to know what was going on. It was a difficult situation but she was making the most of it which is the important thing. She even tried giving advice to Dora that the romance may not work out well with David but the heroine didn’t listen. Dora could have been better, the main issue with her is that she has a hard time keeping up a conversation because her mind tends to wander.

In a way there was a second romance plot at the accounting firm but David tended to not notice since he only had eyes for Dora. Of course the accounting area is where you had a lot of the main conflicts in the film since the dispute was over a great deal of money. Effectively the main villain was trying to swindle Copperfield and the others. The guy was completely succeeding to. Just goes to show you’ve always gotta stay alert.

The review’s a little all over the place but that’s because the film jumps around a lot as well. After all, this is the complete story of David Copperfield so you get to see the whole journey but with little flashbacks thrown in or meanwhile scenes that overlay over the present scene. It does look pretty cool as I mentioned earlier for sure. So on a visual level that was neat.

My only real issue with the film is that it could be a little on the boring side. Even by the end of the film you don’t feel like a whole lot happened. I think part of the issue lies with the characters as it’s hard to really get on board with any of them. There’s also the fact that some of the characters seem so obviously shady that when they leave and betray the others you aren’t surprised. Like David’s “friend” who decided to take off with one of the girls from the first village. He ditched her of course but she was also to blame there. How can you just leave your fiancé at the drop of a hat?

Later on she comes back since the relationship didn’t work out but why should the guy even want her back? It’s now clear that he was the second choice and she only returned as a last resort. So….yeah that’s not a good sign. The characters keep falling for tricks or get busted by someone else. Either way, I think adding in some more likable characters of changing the setting could have gone a long way.

Overall, I wasn’t a big fan of the stuff that happened when David was a kid. The Step Dad was pretty bad and his Mom didn’t do anything to help him out either which was annoying. His teen years weren’t bad though. The main issue is just that the film won’t keep your interest. There isn’t a lot of witty banter or comical scenes to break things up either. The film is mainly serious after all, although I wouldn’t say in a dark way. It’s just going about things in a matter of fact way so how interesting you find the film will depend on how interesting you find the lead to be. It’s sort of like the Henry or Ramona books, perhaps Huckleberry Finn and yet not as interesting as my memories of those books. Perhaps a sequel would be able to do this a little better if we could get some kind of big time skip that would be cool too so tings are a little more modern.

2 thoughts on “The Personal History of David Copperfield Review”