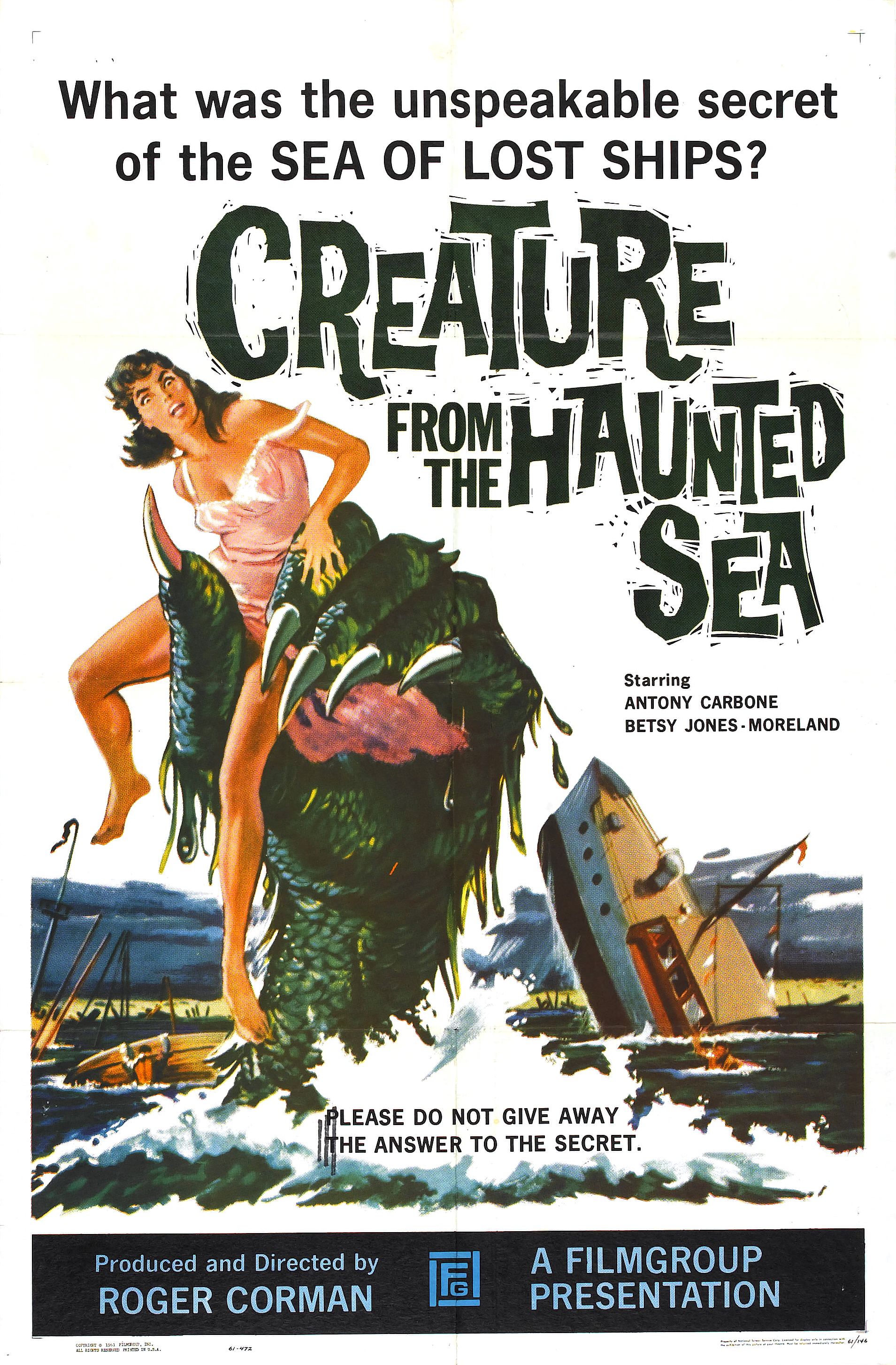 When you have a film with a title like this you know you’re in for a treat. After all, films with monsters in them tend to be fun and this one is no exception. A whole lot happens throughout the movie so while it is fairly short, it doesn’t really feel that way. Roger Corman’s films tend to be rather sub par but this one surprised me as it was actually fairly good.

The movie starts out with Capetto making a deal with some resistance leaders. He will get their men onto safe land and will transport their treasure using his boat. He’ll get a nice commission of course. The general and his men agree to this deal but what they don’t know is that Capetto plans to backstab them and take the money for himself. His plan is simple, he’ll leave traces of a fake monster aboard the ship and bump the henchmen off one by one. Eventually they will all get scared and run off while Capetto keeps the money.

What Capetto doesn’t know is that an American agent known as Sparks as infiltrated his crew and is trying to find some proof of their wrongdoing. He intends to fight as hard as he can in part because he thinks Capetto’s main girl Mary-Belle needs saving. The guy is so hopelessly obsessed with her that no matter how many times she says she likes the life of crime he doesn’t believe her. What none of these characters know is that there is a true monster running around as well.

From the start you can tell that the film is having a lot of fun with this concept. It’s definitely not a serious creature feature as even for its time you’re not meant to take it seriously. The costume for the monster is really good though. His eyes kind of pop out at you that’s for sure. He also has good gripping strength so if he grabs you then it’s all over. There is just no escape at that point. It doesn’t do a whole lot in the film at first but by the end lets just say that the body count is pretty high here.

Capetto and his crew are to blame for a lot of it as well though since they bump off a lot of the resistance guys themselves. They want the treasure after all and bumping people is really the only way they know how to get it. Capetto is a smooth customer and works well as the main villain. He is able to gain people’s trust rather easily considering that he is openly a criminal. That takes a lot of skill and intelligence.

Then you have Mary-Belle who is a reasonable heroine. She certainly doesn’t mind insulting the rest of the characters quite a lot. In particular she definitely insults Sparks a lot but it’s certainly justified since the guy is way too obsessed. He has a lot of fun dialogue as the narrator but as the character himself he is clearly too distracted to do his job properly. The guy is always messing up and if he is America’s best agent then we are certainly in trouble.

Then you have Jack who falls for one of the island girls in a subplot that seems rather pointless. See, the characters crash land on an island where naturally they meet up with an island girl and her mother. Both of them get their own romantic subplots as Pete, the animal guy also falls for one of them. Pete’s gimmick is that he can mimic any animal cry with ease. He can sound like an elephant to suddenly a giant monster. Naturally you can see how this would help the plans that Capetto had in store for the others. It also leads to a rather odd sequence of Pete and the island girl communicating through the roars. One of them was also throwing a lot of insults constantly but these guys only understand English so they never picked up on it.

A comedy/parody like this really thrives on having a lot of fun moments and poking fun at a variety of story elements without dragging on. I would say this one definitely pulls that off without issue. For starters the film is pretty short as mentioned earlier and it is very entertaining. The writing is pretty solid with some good one liners and characters stating the obvious. It can all get quite dramatic like something out of a Noir title but without earning it the way most films would.

The ending is even a little unexpected I would say. There was one character that I didn’t think was going to die in the end who ultimately wasn’t able to survive. As mentioned, the body count here is high, perhaps a lot higher than the average creature feature. The ending is also pretty cool with the monster actually getting some personality in the final shot. Now that’s how you do it.

The voices for some of the characters was also something else. The voice imitation guy for example would sound really deep at some points and then would go back to normal. I would say this was true for a few characters but mainly his guy. I think the sound mixing guy was having some fun while getting this all ready. Ultimately I wouldn’t say this is a film you’ll never forget or some kind of amazing title but it was pretty good and a lot of fun. Ultimately that’s the proper foundations towards making a good movie.

Overall, Creature from the Haunted Sea was pretty good, definitely better than I had expected. It has a good mix of humor and suspense along with an interesting cast. While they are interesting, saying that they are fully likable may be a different ball game. Most of these guys are all either crooks of desperate flirts who may as well be crooks. None of them are meant to be all that likable but at the same time the film doesn’t go out of its way to paint them as terrible characters or anything. They do murder people but by and large they stick to knocking people off rather quickly. If you want to check out a film that’s rather outside the box then this one will be up your alley. Just watch out for the monster because he means business!