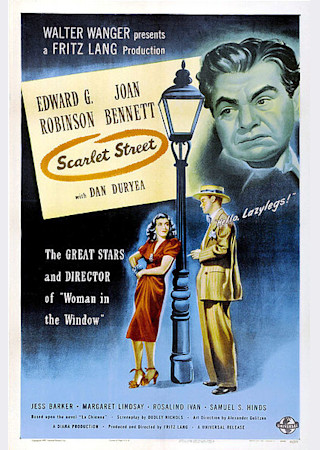 Every now and then you come across a main character who gets suckered so badly that you have a hard time rooting for him. This is the case here. Look, when you decide to start desperately going after someone and allowing yourself to be used, then you’ve already dug a rather big hole. Sunset Street has some fun elements but the lead is just brutal.

The movie starts with Chris getting fired. He had a good run but it just wasn’t in the company’s best interests to keep him. His wife Adele is less than thrilled as she is always reminding Chris about how much better her first husband was. Why did they ever even get married? No clue but I wouldn’t be surprised if Chris was desperate and approached Adele. Either way Chris wants to be a master painter but unfortunately he’s a bit of a perfectionist and never actually takes them down to be appraised. As such, he lives a rather poor life.

One day he manages to save a girl named Kitty who was being mugged on the street. He falls for her at first sight and tries to convince her to be together with him. She has no interest in the prospect but her abusive boyfriend Johnny thinks this is a great idea. Due to some misunderstandings they think Chris is rich so Johnny wants Kitty to get friendly with him while stealing the guy’s paintings and constantly asking for money. Will Chris realize the truth or will he just keep handing her all of his funds?

Chris really shows no sense of self preservation here. It’s great that he stepped in to save Kitty. It’s just every scene after that where he seems suspect. He sees that Johnny is rather suspect but never really questions why the guy is always alone with Kitty when he’s supposed to be together with the friend. (That’s the cover story that Kitty feeds him) Chris is actively cheating on his wife and while their relationship may not be great, it’s still way below the belt to start cheating for any kind of reason. I’m not cutting Chris any kind of slack for that.

Chris really sets himself up for disappointment every step of the way. Kitty also couldn’t make it any more obvious that she didn’t like him with her body language and everything but Chris is so desperate that he ignores the signs. By the time we get to the climax there’s just no way to like the guy.

Scarlet Street certainly ends in a rather intense way though as every characters gets their just desserts. Nobody really has a happy ending here and none of them had been trying to earn one anyway. At the end of the day Johnny was an unrepentant criminal, Kitty was a very willing accomplice, and Chris was morally bankrupt. The three of them had more in common than you’d think.

As for Kitty, I didn’t like her either. She may try telling Johnny that this is a bad idea a whole lot but I never award you points for complaining. At the end of the day she ultimately still went through with this plan to swindle Chris. Additionally, she is constantly defending Johnny and his crazy behavior even when her friend warns her that the whole thing is toxic. Kitty doesn’t have particularly good judgment here and she couldn’t have handled her final scenes any worse.

Johnny? Well, the guy talks like he’s a master planner but he makes every kind of mistake in the book. He was really in a good spot to live rather well by shaving off some money at each end. Instead he gets more and more greedy to the point where it would be impossible to hide his presence. The plan is to sell Chris’ works for big bucks. Okay then, do that plan and just take 10% at the end or even 30%. He wants to take the full 100% but how can you do that without Chris noticing? He constantly visits Kitty in her private apartment even though he knows that Chris has the keys. Think Johnny, Think!

Adele’s certainly not a pleasant character but honestly she would be the best one from these 4 at least. She is constantly complaining and that actually works in Chris’ favor near the end. Nothing is ever good enough for her but she is really a supporting character so you shouldn’t expect to see her for very long.

The writing in the film is fairly solid otherwise. The main character may be pretty annoying but you’ve got an interesting premise here. With some smarter villains then Chris would have really been doomed from day 1. The ending comes out of nowhere a bit with how one of the characters cracks. Things certainly escalated but when you’re dealing with someone crazy desperate to have you at the point of losing all their money, then a certain element of danger goes in with that. Johnny and Kitty were playing a dangerous game from the start.

Scarlet Street does a good job of switching up the genres though. There’s also a decent amount of comedy here with all the hijinks of the public trying to find out who the real painter is. They’re given the run around of course but are quite determined in their search. It’s always fun to have them talking about the high concepts of art. It’s certainly not a subject I get all that invested in as my taste in art tends to differ from high society quite a bit. Needless to say, they were not prepared to see through any kind of tricks.

Overall, Scarlet Street isn’t quite up to snuff compared to most noir films. Ultimately I’m used to rather strong main characters in these titles or some kind of big mystery. Technically this one doesn’t have a lot of that and it may even be harder to call this a Noir title than most but it still does feel like one at least with the atmosphere at times. Certainly more low key though as there aren’t any fights or deaths for a while. Chris is just one of the worst main characters I’ve seen in a while. It’s always crucial to remember that if you cheat you’re probably going to end up dying in these things. The best thing to do is walk the straight and narrow path but these main characters have a hard time doing that.