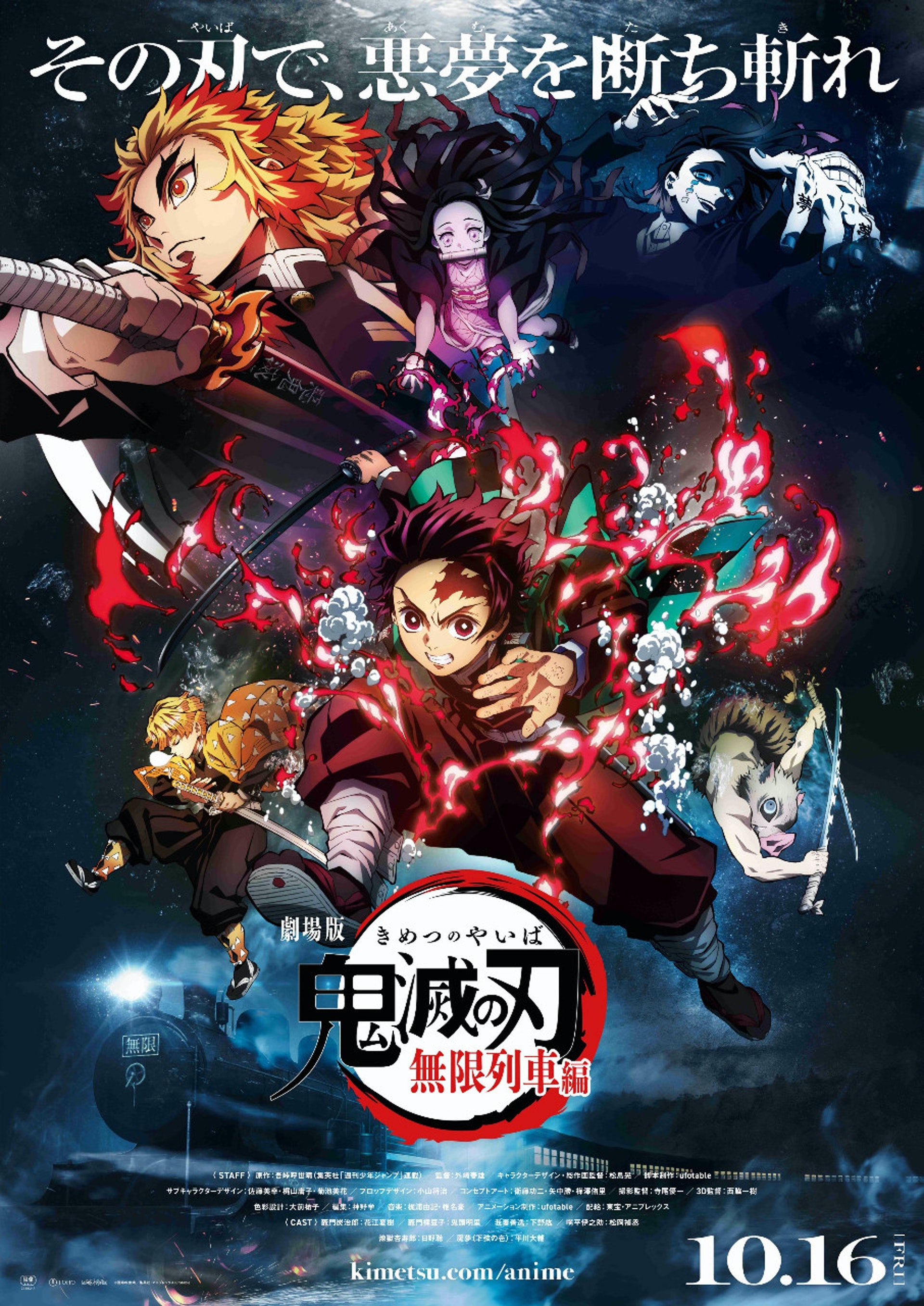 Demon Slayer certainly became a global sensation. When the anime launched it was appearing everywhere and so it’s only natural that a movie sequel by UFotable would continue to get a ton of press and box office. This movie adapts the train arc which is certainly one of the strongest parts of the series. It’s the first time we get to see a Hashira fight seriously which is a pretty big deal. It also works really well as a movie so it was a good pick by the company.

Picking up where the series left off, Tanjiro, Inosuke, and Zenitsu are boarding the Mugen Train. They are to team up with the Hashira known as Rengoku to stop the demons that are on the train. People have been going missing left and right on the train and the slayers sent previously have all been vanquished. Tanjiro and the others may still be newcomers to the organization but they have proven themselves in battle. They are ready to conquer this train.

Unsurprisingly Rengoku is the one doing most of the heavy lifting though. He is a Hashira for a reason and Demon Slayer has a pretty solid power level setup going for it. In fact, when paired up with most of its Shonen Jump companions you could make a strong case for this being one of the best in terms of the power levels making a lot of sense. It’s a strong point for Demon Slayer and never for a moment does it looks like the rest of the characters are competing with Rengoku. He is definitely the star of the show here.

I like Giyu a lot and he’s the only rival to Rengoku in terms of being my favorite Hashira but ultimately I would say Rengoku definitely wins this. He’s a very earnest guy and his flame abilities are incredible. I would go as far as to say he’s the strongest member of the group in terms of base abilities, so no red swords. He has tremendous speed and in the movie we see how difficult it is to protect one car and yet he was protecting 5. He has a pretty emotional backstory and never gets tempted by the demons.

Still, while Rengoku has a lot of screen time I would say this is still Tanjiro’s movie. He is forced to confront his past and the idea of an alternate reality. It’s never easy to leave such a dream but he does it rather well. It’s also just pretty painful in general to leave even knowing how you do it but the guy is resolute. Tanjiro’s always had a lot of determination after all. His fight with the demon may be quick but it’s a solid action scene all the same.

Then you have Inosuke who looks good as expected. He’s confident in his abilities and gets a good tag team with Tanjiro. His inner dream is also the most amusing out of the 3 which reflects his inner mind rather well. Zenitsu gets the shaft from the 3 which may surprise some fans since you would figure that a movie where the heroes are constantly in a dream-like state would be to his advantage. In some ways it is as he couldn’t protect Nezuko nearly as well while awake but his action is mainly off screen.

Enmu is the main villain here. He’s not really much of a fighter in close quarters combat which is why he has the whole train scheme. If you put everyone to sleep then perhaps you can end up winning without having to go through all of the trouble of fighting. I do think he overthinks it to an extent though. Due to how it’s hard to wake up in general and it takes a while, I think the easiest thing to do would just be to stab the slayers as soon as they’re asleep. The plan with the kids was decent and apparently it works a lot but it feels like a lot of work.

Enmu isn’t quite as solid as a lot of the other demons in Muzan’s ranks though. I never became a big fan of his personally. His abilities are unique to be sure and he does have some quality dialogue but that’s about all I can say for him. In true movie fashion his super form is pretty much just a giant blob that can’t fight back. So those action scenes while well animated don’t quite hold up to the rest. Give me the opening action scenes against the random demons anytime. Akaza also looks great in his appearance and already cemented himself as the greatest villain in the series by this point. The guy really enjoys battling and even has a bit of an honor code about him as he tries to get the heroes to his level as well. You definitely have to respect the commitment.

Of course, this wouldn’t be a Ufotable film without some kind of insane action sequence. The fun part is that pretty much any chunk of the film could be used as a great display of animation. Even the “standard” fights of the movie look great which is to be expected. I still have Ufotable as the best pure animation company in the biz right now. Their shows just look incredible. My favorite will always be Pierot but in a 1 on 1 contest the smart money would be on Ufotable to win. The final battle looks incredible. The colors are striking and you can tell it’ll be years before anime are able to churn out fights like this on the regular.

It was just an excellent way to wrap up the adventure. Mugen Train is one of those films that is fairly long but certainly doesn’t feel like it. The movie just keeps going from scene to scene with an engaging story so it never drags. There are some pretty tense moments as well like the conductor punching in all of the tickets which works really well. The soundtrack is very good. It’s definitely got a Fate vibe to it which always works really well with the animation style. It’s got a grand feel to it and ups the anticipation/hype of every moment. There are some themes from the show but also some new ones to be sure so there’s a good mix there.

The movie isn’t nearly as violent as the show which also works well for making this a big theater experience. The most blood is probably when the characters are slashing at the blobs which is certainly the weakest part of the film since these blobs can’t do anything but for the most part the film is ready to just jump straight into the action. I wouldn’t say there are any real weaknesses to the title. I suppose if this had been the true climax that would have been really underwhelming but fortunately we got to end with something spectacular.

Overall, Mugen Train is definitely a great film. It’s got top tier animation and music at the ready along with a great cast of characters. Every scene with Rengoku is really a great moment. His self preservation instinct is really on point and the guy also feels like a natural leader. His very presence instills confidence in anyone who’s around him. Most likely you’ll already know about the true final act by the time you watch the film but if you don’t that’s probably a good thing because it’s one of the best cinematic twists of all time. It’s something that really pushes the film to the next level and I would consider this part of the movie an absolute necessity. Whether you’ve watched the anime or not you should be able to jump into this film and have a good time with it. I’d definitely recommend giving it whirl and now we’ll see when the next film comes out.