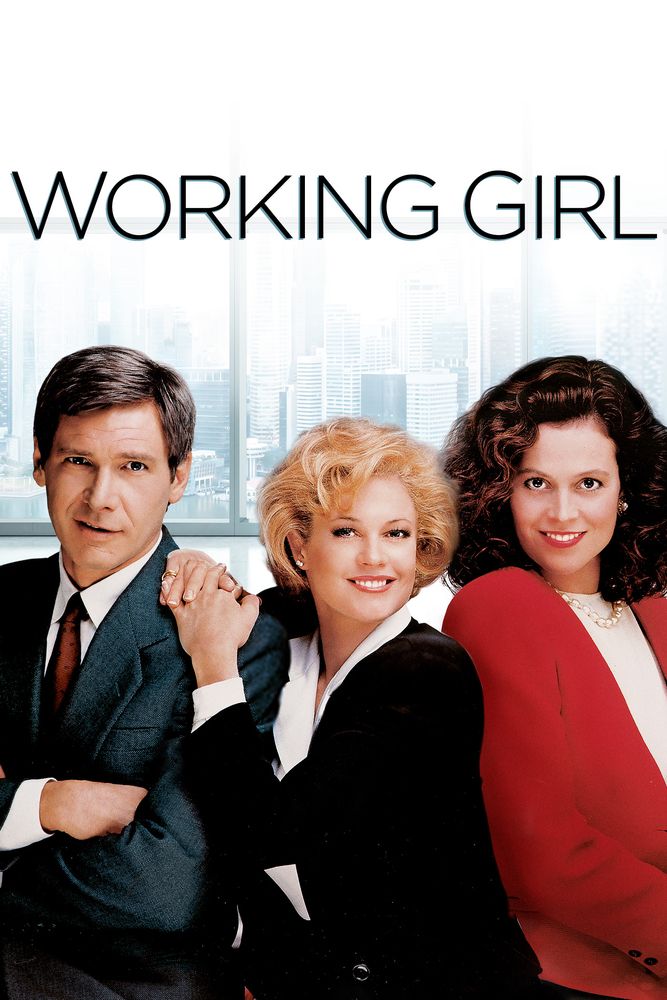 Time for a film about the horrors of the workplace and how Tess can change things. It’s got some good moments and is certainly a lot better than some of the others films that I’ve seen from this group. That being said, Working Girl does have some rather big issues that keep it from being the next big Rom-Com. Effectively it just wasn’t able to coast its way to the ending as easily as it otherwise could have.

The movie starts with Tess needing to be transferred once again after having a falling out with her boss. Unfortunately the environments she goes into all tend to be rather toxic but unfortunately since this has been a trend she is told that this is her last chance. Her boss seems good this time though. Her name is Katharine and she is a very pro-active person who sees an opportunity and grabs it. She has taken Tess under her wing and so the heroine finally feels like she has a chance to speak out and get recognition.

Unfortunately Katharine is involved in a skiing accident and breaks her leg. Tess then finds out that Katharine has been sabotaging her behind her back such as by stealing one of her ideas and presenting it as her own. Tess decides to get back at her by reclaiming control of the idea and working out of Katharine’s office. She has to hurry though as the boss will be returning soon. Can Tess manage to complete the deals before this happened or is she setting herself up for failure?

First off, I do think the film did a good job with making Katharine appear to be quite reasonable at first. She may be rather tough but she does seem like a good boss. The opening slights also feel rather realistic rather than being antagonistic like having Tess serve the guests and such. You wouldn’t expect the boss to do that and it’s the kind of thing that could be fine if it’s on good terms.

Where the red flags start to appear is with stealing the idea. Now this was also a bit of an error in Tess’ spot as you can’t trust anyone in business. She should have submitted the idea as an email since she would then have an electronic receipt of the request. That would have absolutely put her in the driver’s seat here as she could have brought it up later. It’s good that she wanted to help of course but you have to remember that corporate is never your friend. They are always looking out for the bottom line and to help themselves.

Katharine gradually gets more and more extreme as the film goes on though. We learn/it’s heavily implied that she is cheating on her boyfriend and she starts making Tess do everything for her. Throughout the film you’re holding out a little hope that it’s all just some big misunderstanding but eventually it’s clear that this isn’t the case. She is an interesting villain though.

As for Tess, I’d say she’s a weak lead. A lot of the film is about her getting pushed around by Katharine but part of the problem is that she isn’t really defending herself. She’s putting herself in a spot where she can be easily pushed around and that’s the big issue here. If she had stuck to her guns then she probably would have been able to avoid parts of this. Her ideas on leading the business do work well and she is quite bold. I’ll say those were good ideas though.

She waffles on being with Mick or not though which is a very big issue. Going back a few steps, Mick was Tess’ boyfriend but then she caught him cheating with another girl so they split up. He approaches her during the film to try and get back together. He acts as though his being with another girl wasn’t a big deal and it seems like the film backs that up as well. I don’t see why Tess would even entertain the idea of going back with him. You can clearly never trust the guy again and yet, it seems like she was going to take him back before he reveals that he was going to be getting married soon. That hurts Tess quite a lot.

Make no mistake, Mick’s the worst character in the film. It’s all on him to be sure but you wish the other characters would condemn him for that more. Cyn is Tess’ best friend and even she is saying that Tess should take him back. Why? That would be such a desperate and terrible move to take him back. We see how quickly Mick moved on after that so it really makes no sense. Putting her on the spot for a proposal that she doesn’t even turn down didn’t help either. So Cyn was really not a good friend at all.

The main characters can definitely be a bit suspect at times. Then we have Jack who is the main hero here. He’s ready to help with the contract and such but quickly falls for Tess. Despite Tess saying she was only there for business and nothing was going to happen…they have an affair shortly afterwards. So much for restraint right? Tess was under the influence at the time but that’s no excuse because then she should clearly not be drinking. She knew that she had some pills beforehand as well so there’s no real excuse there.

Jack does give the film a lot of its humor though. He has some pretty good lines which help to shake things up. This film is part comedy after all and some of the scenes definitely work pretty well. It’s not as funny as most comedy films but when you throw enough jokes in some are always bound to land. At the very least it’s why comedy films are usually a good bet since you should have some good moments thrown in throughout and you’ll usually leave on a happy note.

The negatives just outweigh the positives in this case. The film also has an issue with fanservice such as several scenes of Tess changing while the characters are having a conversation. There’s nothing natural about this and it always feels quite forced into the movie. At least put in a divider or something. The romance is extremely weak particularly since it all started because they were drunk. Not the way you want to start the next chapter of your life right? So many of these films would be quite different if the characters drank Pepsi instead of a Budlight.

Overall, Working Girl is a film that has a lot of fun moments but beneath the surface it doesn’t hold up. A lot of the characters are quite suspect to the point where you may have a hard time finding who you should root for. The big boss at the end who shows up is fun but he’s only around for a few minutes. The movie has a bit of a cynical approach to romance with every character cheating on each other. Keep in mind that Jack had a girlfriend already when he had his affair with Tess. Just something to keep in mind….. The film would have benefited greatly from focusing more on the actual workplace and throwing humor in there a la The Office rather than spending the majority of the film outside the office crashing parties. If you’re going to go that route, focus on the negotiation. Those parts of the film were always pretty strong. In the end you’re probably better off with a different title.