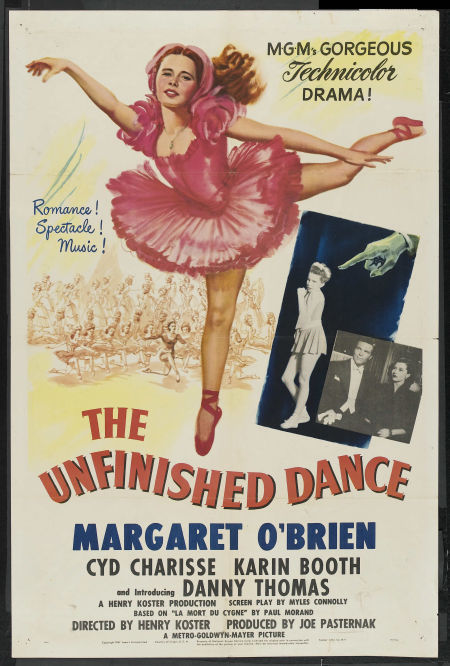 Ballet’s definitely not my thing. I’ve just never been a fan of it as a style of dance. It’s not particularly entertaining to watch and I don’t care much for the uniforms. It works more in a combat sense like in Sailor Moon I suppose but even then I’ll take something a little more combat ready. For dances ballet also tends to be a bit slower and I like something fast paced and with a lot of action. If you can get past the actual ballet then the film is good though.

The movie starts by introducing us to Meg. Meg is a spoiled kid who wants to be a great ballet dancer but isn’t willing to put in the work. She always skips her lessons to spy on Ariane and basically use up the professional’s time. If anyone says something negative about Ariane Meg is ready to throw hands and give someone the fade. She’s not a kid who is shy about taking someone on. This continues to get her into a lot of trouble though and her Mom/Aunt (I forget which) is super distant so the only parental figure in her life is the kind Mr. Paneros.

Mr. Paneros does his best to contain the damage but it’s often tricky. One day the ballet hires Anna, one of the greatest ballerinas in the world. Ariane knows that her lack of skill will be exposed compared to this person and runs off in a huff. Everyone agrees that Anna is better so Meg decides to put a stop to this. She opens up a trap door and cripples Anna so that Ariane will have the center stage again. The main issue is that her conscience is eating her alive and her “friend” knows about what is happening so there’s now a loose end in the mix. Can Meg make things right?

Now to Meg’s very slight defense it was an accident or at least the film tells us this. She meant to switch the lights off and only happened to turn on the trap door. Sure……lets roll with that. It’s not very convincing though as she could have done any number of things instead of watching the whole time. It was not a good look to say the least. Meg is very extreme throughout the film as she casually talks about death and such. It’s unfortunate but nobody ends up helping her out of her obsessions here.

Mr. Paneros is a good character who means well but does often choose the wrong course of action. He tries to console Meg but ends up lying about everything all the time. It’s like he can’t help it because the guy just keeps on doubling down. It’s a bad habit that he certainly needs to break. At least he’s there for Meg though as her family is never around to do anything. It makes his one sided romance more on the tragic side since he is permanently stuck in the friend zone with the aunt.

As for Ariane, I didn’t like her. I thought the film was low key portraying her as a villain the whole time. It makes sense when you think about it with how petty she was. Anna was very polite the whole time while Ariane didn’t want her picture taken and kept squirming. Initially I thought Anna would end up being a villain but the film never actually went down that road. As a result it just made Ariane look even worse in comparison. She is quick to give up her dream as well which is all well and good but then it makes her jealousy look even worse since she was never that serious about her dream.

Meanwhile Anna is definitely the best character in the film. She suffers a rather bad break but doesn’t let it get to her. I’ll also give a lot of kudos to her assistant/coach who was with her every step of the rehabilitation. She was always there to lend a helping hand to Anna and to try and keep her spirits up throughout everything that was happening. They thought of the coaching idea together and at least Anna now had a sense of normalcy. Anna consistently took the high road as well while the other characters were treading water.

I was glad her ending didn’t get too sad as it would have ended things on a rather unfortunate note. Meanwhile the other kids are mostly left to bicker by the end as you’d expect. Meg now knows that she can’t trust her “friend” and also that the class bully is still around. There’s not a whole lot that they can do at this point and proving anything would be difficult so Meg has nothing to worry about. I like to think they will have an employee by the trap door machine at all times now though. No reason for that to be left unattended.

As mentioned earlier, the only weakness for me would be the actual Ballet scenes. They just weren’t all that entertaining at all if you ask me. I was always just ready for those scenes to move on so we could get on with the story. Especially when Meg tried to dance as she just isn’t ready for the ballet scene yet. Additionally, she was an annoying character so you were never quite looking forward to her getting some screen time.

Overall, The Unfinished Dance is a pretty emotional movie that manages to capture the balance between drama and uplifting moments rather well. The movie gets sad at times but also has happy moments sprinkled in as well. Ultimately that’s a good mix to strive for. Mr. Paneros reminded me of Panera Bread with the name but it’s unique so you won’t forget him and he was clearly a good cook. His origin story where he wastes his last dime was definitely sad but you also can’t help but feel like you shouldn’t be playing around with your last dime right? Seems to me that would be really important to keep safe in your pocket.