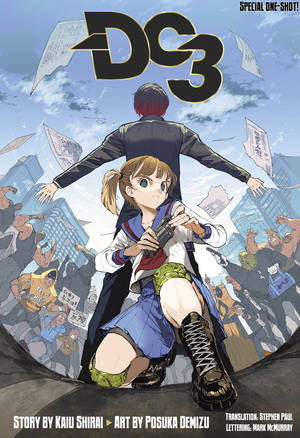 Manga one shots can always be a fun test of seeing how quickly an author can grab an audience. You only have a certain amount of pages at the ready in which you need to establish a concept, new characters, and resolve some kind of situation. It’s a lot of ground to cover and really tests your writing chops. Well, I liked this one shot so I’d say the author did a good job. I’d be interested in seeing how an ongoing for this series would fare.

The series starts by explaining that the whole world is after a girl named Saho Kisaki. Why is she being hunted? Well, she narrates that in the near future (Still 2020s) her father invented a monumental breakthrough in technology. Androids out of a sci-fi novel can now be mass produced and are helping the world in every facet of life. (This is basically the premise to Mega Man) Many people do not like this though. You have the usual crowd saying robots are stealing their jobs, a group who believes Saho is a demon threatening their life, you have people who believe that she is a god, and those who want to kidnap her for money.

Fine, but why blame her and not the father? Well, her father gave her all of the credit saying that the invention was a complete accident and only happened because as a toddler Saho was messing around on his keyboard which got to the right answer. Currently as a teen she is a genius so is it possible that as a baby she was able to solve the code? Either way, that is why the world wants her gone right now.

Saho is fine with this though and believes that she can protect herself. As a result she does not want to have any body guards since there was a tragic incident involving one she had as a kid. Still, she is nearly defeated by an angry mob when she is saved by a robot known as DC3. He explains that her father assigned him as her bodyguard and he has the power of 100 others. Saho is not thrilled about this at all but after he stops more threats and saves her a few more times she is on board with this. Now she will have to get used to having a bodyguard around.

There’s more that happens here but I’m not going to give you a full summary of the chapter. Read the rest of the one shot for the extra details. So here’s why it’s got potential. First off, the art is pretty good. I could even say really good especially for a pilot. The character designs are strong and the artist is able to handle the fight scenes well. At most you can say that there may be a few panels during the battles with too much detail so it gets scattered all over the place but on the whole I’m definitely liking how it looks.

I like the futuristic setting as well. Like I said, this is basically Mega Man. We’re in a world of robots now where a lot of humans resent them. DC3 is built to be a heroic bot (Although there’s a twist involved so he isn’t actually a robot) and is far stronger than all of the other androids on the market. He’s pretty serious all the time about guarding Saho so his character arc will probably involve him not being as ruthless and learning how to take a joke. He’s more literal than someone like Genos so he has a ways to go.

I also like DC3 already. He’s got a strong personality here as someone who really wants to save Saho and is very business-like. Now, he does murder a ton of people in this opening chapter and thinks of all human beings who aren’t Saho and her father as trash but that’s more part of the humor than a serious plot development. Saho’s father also thinks all humans should just die so there’s a lot of resentment going around.

Low-key though since this is always played for laughs. Even when the characters discuss how a lot of people died they literally laugh it off. As one person notes, the father owns the entire block and all other blocks leading up to the school so anyone attacking Saho on those premises is not an innocent civilian anyway. They have no qualms about murdering all of those guys. Saho is a little bothered by it but not really although I do expect if this becomes an ongoing they will scale back on that front unless this becomes a gag manga or something. Destroying people on the regular might be going too far.

As for Saho, she’s a good character. Right now she doesn’t want to open her heart up to anyone since she thinks they’ll just die but should come around pretty soon. She’s fairly dependable on her own with the various gadgets she has so that’s good. I think there’s a good amount of potential here. Just don’t have her try to tell DC3 to go away at critical times for drama since I like to think they should already be getting along pretty well after this one shot.

Saho’s father is pretty great as well. He never loses his cool even when held at gun point and tends to take things in stride. He was smart enough to have a backup plan after DC3 as well so the guy is ready for action. The father isn’t exactly a hero but he wants to protect Saho at all costs which is a great trait for a character. As long as she is safe he doesn’t care about his reputation.

So there’s a lot of green flags all around. Now, what are the red flags for the series? I think red flag is too strong a term since I liked this one shot so lets say yellow flags. There are several upskirts here as the characters all fight in school uniforms while performing flips. In this case they have shorts so it’s nothing crazy but I hope that’s not the artist testing the waters here. I would say in recent years Jump has been especially good with not having fanservice in their titles so I want this one to continue the trend.

Just in terms of series length, DC3 is already starting off as incredibly powerful. He’s stronger than 100 androids combined and is built by the greatest genius on the planet. That means the series can either go down the road of immediate power escalation with someone even stronger or it can go in a more casual direction as a school comedy. I’d say the cast is strong enough where you could go that route and make it good but my preference will always be with the fighting. Additionally, the action is already extensive enough where I think it has to play a part but you can still survive without going into city busters too quickly. (DC3 was already able to blow up a full city block range so the firepower is going to be intense here) Focus on the assassins and also give Saho a chance to fight off some with her inventions as you slowly build up the threats. I don’t see her staying relevant power-wise for very long on her own but as a genius surely she can invent an exo-suit for herself or something to stay in the game. The quick fights we did get here were exciting so I’d look forward to the next battles.

Overall, there’s not much more to say considering that this is only a single chapter. My verdict in the end is that this has a ton of potential. I’m a big Mega Man fan so seeing a manga try to tackle that concept is exciting. The main characters are likable and it looks like the dynamic with the main two should be entertaining. It’s also different enough where maybe it could be a hit among Jump readers. Feels like a while since we got a true technological title here based around androids. If you haven’t checked this one out yet, I’d recommend reading through it. It’s currently free on the Viz site so there’s not a whole lot of effort involved in giving it a read. Only time will tell if it’s picked up.