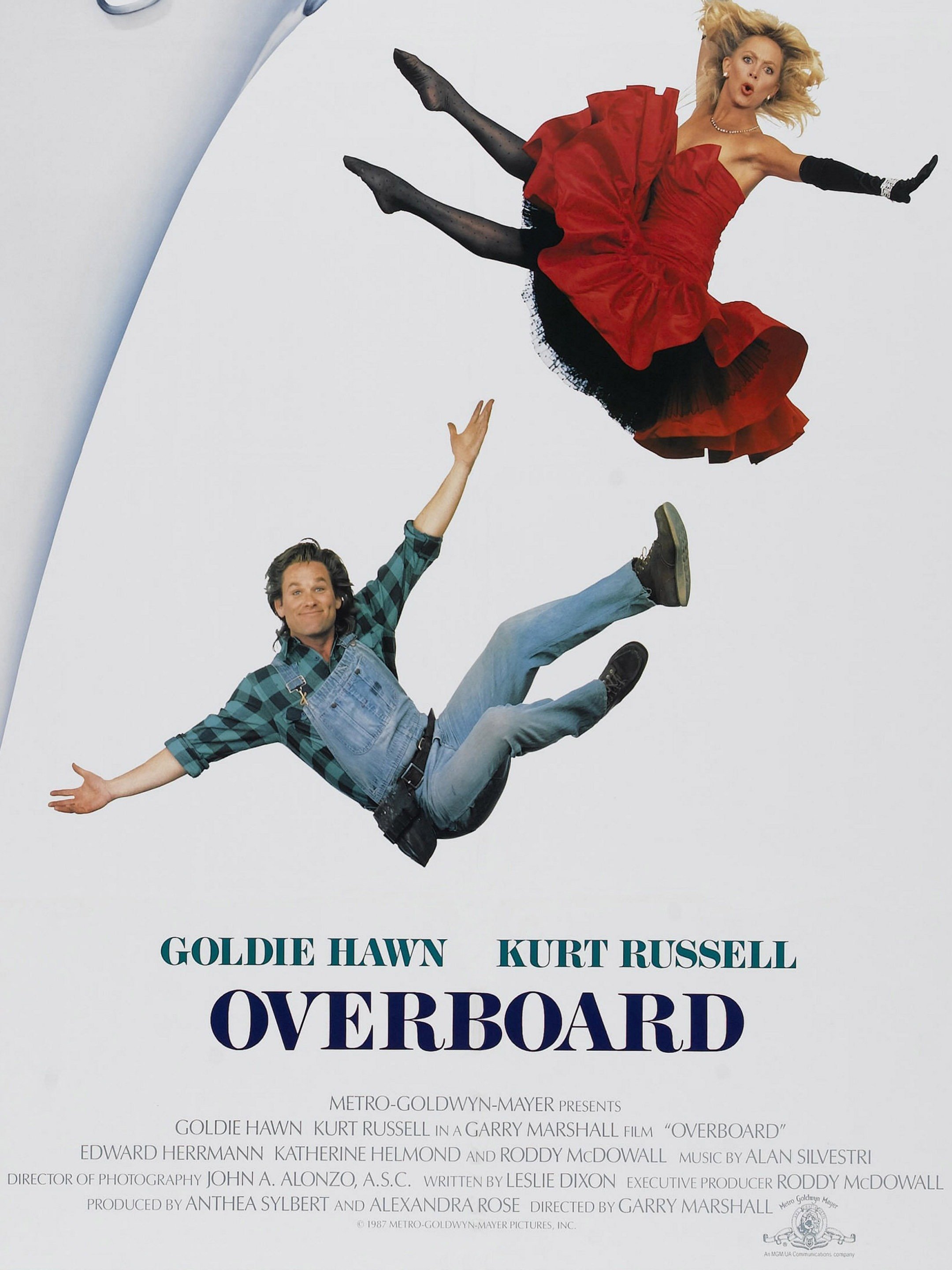 Whenever a main character has amnesia in an action series it can be pretty annoying since you have to wait a long time for them to gain their old abilities back. In a comedy angle it definitely works a lot better though. There’s a lot of interesting things you can do with the premise but unfortunately Overboard misses the boat on this one. It ends up being fairly mean spirited for a while so by the time the characters are all getting along it just feels a little too late.

The movie starts by introducing us to Joanna who is incredibly rich. She enjoys living the high society life on board her huge yacht. Joanna isn’t a very nice person to be around though and is rude to everybody. One day she hires Dean to put in a new bookcase but then complains about it after he’s done. She even goes as far as saying she will not pay for the job and throws him as well as his toolkit overboard. Dean’s upset but there’s no real way for him to get revenge.

Joanna has that covered though as she sets the roots for her own demise. Late at night she heads back upstairs to grab her ring but slips and falls off the boat. She suffers amnesia as a result and winds up in a hospital. Her husband realizes this but is rather happy at the outcome since he now has riches of his own he can squander in her name. So he heads off to have a bunch of affairs. Dean happens to see a news broadcast of Joanna in the hospital and figures he will have a little fun with this. His master plan is to convince Joanna that they are married and make her do all the chores. Once she has paid him back for the lost tools though this grunt work, he will tell her the truth. Will things really play out like that?

Now this is a comedic romance so this is all portrayed in a rather light manner. Dean’s pretty selfish here but at least you know he’s not a bad guy so things won’t get crazy. My main issue here is really just that he takes the whole prank too far. Is it really still a prank when he is actually making her do everything and making fun of her in the process? He has a blast making her feel pretty bad about her past throughout and doesn’t make her job any easier. Dean also likes to troll her about their sleeping arrangements.

It would have been nice to have seen Dean at least help out a bit. As Joanna gets used to the role and performs more tasks, it feels like Dean does less and less. When his kids are having a tough time in school and flunking, he refuses to help her out and even says it’s none of her business. So he comes close to messing up his own cover story several times and is actively neglecting the kids.

Now, we know Dean has a golf course to work on and has two jobs but you’d think he would at least listen to Joanna a bit. She turned their home from a dump into a rather respectable place. Joanna even got the kids to be a lot more reasonable compared to their opening appearances. The fact of the matter is that even as someone with no memory or practical experience (It’s made clear that she has never cooked or done common chores in her life) she was doing a much better job than Dean ever did. She was really trying hard and he wasn’t supportive.

As brainwashed Joanna, she was a pretty solid character. She did her share of whining but ultimately got the job done. In her normal self she’s certainly not a likable character but you don’t see her in that form for very long. As for Dean…yeah I didn’t like him. Even as a gag, manipulating someone who is currently suffering from amnesia is very sketchy to say the least. He lost more and more points for neglecting the kids as well. Dean even chooses the absolute worst time to try and come clean with Joanna about what’s going on here. It’s like he couldn’t really get a lot right. He’s a good carpenter but that’s about all I could say for him.

As for Billy, he’s Dean’s best friend and gets a decent sized role. He’s usually the voice of reason here and keeps Dean from making any mistakes that are too large to walk back from. I didn’t care for the guy though, he’s not exactly good about keeping his eyes to himself. The only thing I’ll give him credit for is at least not letting Dean self destruct in the climax but that’s about it.

The humor in the film can be decent at times but not nearly as much as you would expect with this being a comedy film. Quite a few of the jokes don’t land nearly as much and any scene with the kids can usually be more on the annoying side. They may get a little better by the end but have a lot of screen time before that as well. For a good supporting character, Joanna’s mother is at least determined. She was the only one who even seemed to care that the heroine was missing and did everything she could to track her down. We do see that the mom is as rude as Joanna (So we know where she got these traits) but I’ll give her credit for actually going on an adventure personally.

Really, fixing this film would be fairly easy. I think you just tone down the extent to which Dean is pranking her. You still keep in the premise of him tricking Joanna and going home with her since that’s the whole point of the movie but have him actually contribute. His cover story is that he wanted her to pay him back for the tools/installation so her doing the dishes, laundry and such is all helping pay this back.

Fine you keep that and then stick with it as the baseline. Dean should still be hanging out with his kids and at least not actively making a mess. Surely he can help out around the house as well. It would give a real reason for a romance to actually develop since they would get along better. Joanna may even like the home environment compared to the yacht and Dean would also see her true character shine through like when she defended the kids. That would make for a much more organic experience.

I haven’t touched on the romance but as you can probably guess, it really doesn’t work. It’s about as shallow as you would expect. Now, I can’t say it comes out of nowhere since they are together for a pretty long time throughout the course of the film but when Joanna inevitably gets her memories back you can’t possibly imagine this working out. Imagine finding out that someone’s been playing you for weeks/months? Nah, that’s definitely not going to end up being a romantic ending no matter how you slice it.

Overall, Overboard has some potential but ultimately doesn’t live up to it. The writing’s okay and the general idea is interesting but the execution should have been handled better. Make the characters more likable and then you’ve really got something here. Dean should have stuck to his goal of just trying to get a fair shake with the money he lost as opposed to just trolling her for the fun of it. He just takes the joke too far to the point where it isn’t a joke anymore. If you want a good comedic experience, you’ve got better options than this one.