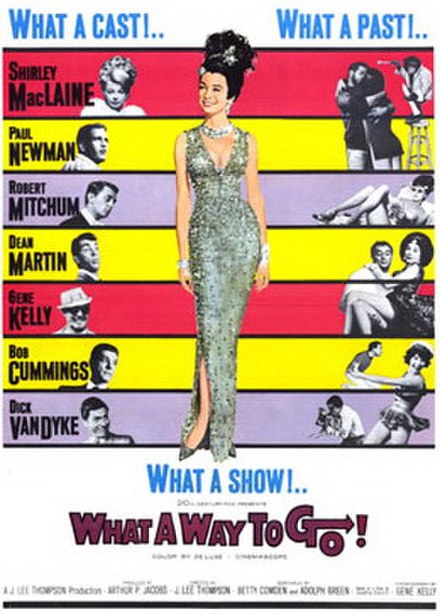 It’s very hard to make you sympathize with a main character who doesn’t want to be rich but this film is going to have a go at it. It’s a fun comedy film that embraces how crazy this concept is. I thought the film may have let their foot off the pedal for a bit in the second half and eased up too much but in the end you’ll definitely have a good time.

The film opens up with some guys dropping a coffin and realizing that they may get sued for all of their dollars. We then see Louisa running to the IRS and trying to give away her vast wealth to the government. They definitely can’t have that and instead take her to a psychologist: Steffanson. Steffanson wants her to explain why she would possibly want to give away her millions of dollars like this. Well, she doesn’t want the money because it always results in the death of her husbands. The rest of the film is effectively an anthology of stories styled after different kinds of romance films.

The first story introduces us to Louisa who really despises money. The reason for this is because her mother is obsessed with it and that has always left a bad impression with Louisa. The richest man in town is in love with her and the Mom is thrilled because their family will finally be rich. Louisa doesn’t like this though so she decides to instead get married to the poorest guy in town, a man named Hopper. Hopper is a man of strong character and family values who refuses to sell his house to the rich tycoon. Crawley (The rich guy) doesn’t take kindly to this and wants to bring Hopper down no matter what it takes.

This was a good way to kick things off. It was my favorite story of the bunch and I also thought the film was at its craziest here. Between Louisa’s mom referring to her as a product and Hopper not noticing when Crawley intentionally splashed him with mud you had a lot going on here. Hopper is really portrayed as someone who is as oblivious as possible but part of why I liked the guy is that he does step up when he realizes that this is hurting his wife’s reputation as well.

Naturally the moral of the film is that money itself is evil so this naturally corrupts Hopper. He starts working unlimited overtime and is never home when it counts. He becomes a millionaire and takes over the city quickly but it comes at the expense of hanging out with Louisa which is a shame. Hopper ends up dying of overwork but at least he did leave Louisa well off and still seemed like a good guy. He ended up letting work become his priority which was a grave error but he meant well. In this story there’s not a whole lot that Louisa could have done differently so I don’t think she should have any regrets.

Next up Louisa moves to France where she falls in love with a poor painter named Larry. All right, this time nothing could possibly make him turn rich right? The two have a pretty happy marriage for a while until one day Louisa suggests that maybe Larry should use some music for his painting machines instead of random noises. (He paints with a pretty genius style whereby sound vibrations power his machines and perform the artwork) Unfortunately the music works too well and Larry becomes rich almost instantly. Like with Hopper, Larry has no time for Louisa anymore and is promptly crushed by his own robots who decided to turn evil.

Ignoring the Sci-Fi ramifications of this, it was a pretty intense way to go out. Louisa didn’t stay in France to stop these would be terminators but I’m sure she wishes she hadn’t mentioned something about the music. Still, it’s hardly her fault to throw in a constructive idea, particularly as it was the first time. It is iffy that we’re on the second marriage so soon…but more on that later. Now she is even richer but still has nobody to share it with so Louisa realized it was time to move on.

Next up, Louisa married a guy called Rod who is already rich. Since the guy is so rich, her deadly curse should not affect him right? After all, before death occurs you have to get money in order to activate it. Unfortunately she is not so lucky. His assets still manage to multiply multiple times over and not even trying to get away from the money is enough to save him. This is probably the weakest of the segments mainly because the film doesn’t even try to give a reason for her to like him. It seems like she only married him to test the curse to be honest and of course this backfired. They knew each other for a matter of minutes before they got together. (Slight exaggeration I suppose but a few days at most)

Finally, we get closer to the opening scene as she meets up with a struggling dancer named Pinky. I suppose “Performer” might be more accurate as he does a lot of routines. Things are going well with their marriage until Louisa says he should try performing without all of that crazy face paint he wears. Pinky obliges and becomes a worldwide hit. Oh the shame. Now this is probably the only case where you could blame Louisa because you’d think she would have recognized the curse being in effect at this point right? Still, it’s a hard way to live when you have to watch your every comment or else you may end up becoming rich.

It was a fun segment and all but by now you could definitely guess how things would play out. The climax in the present is pretty intense though. I actually ended up liking the Psychiatrist as the main villain since he clearly had a plan going. That said, how the actual movie ends could have been a little different. I would have ended about 1 minute sooner from where it did which would have been a funny way to close things out.

So on the whole, the humor lands pretty well. It was fun to see the quick segments during each part where Louisa describes the kind of film each marriage was like. It was a nice tribute to the various films although the French one would get a little dicey. If that is an accurate picture of what those romance films are like then I can say those would probably lose out to the others on average. The writing is solid even outside of the humor so the characters are fairly well rounded and memorable. I would have changed the ending but what we got was still decently good.

It’s a comedy film so you don’t want to take things too seriously but at the same time, Louisa did marry like 4-6 times in one movie. That’s an awful lot of relationships over the course of a lifetime right? It just seems to go way too fast if you ask me. In fact, what that tells me is that they were all rebounds and these relationships weren’t all that genuine. I would say the only person she may have truly loved was Hopper and even then that was in part to spite her family so it’s hard to say. Marrying this many times just seems crazy even if there was no curse.

Also, despite all these crazy happenings, I still can’t imagine just trying to toss all your millions like that to the government. At least find some charities or businesses that you want to donate to but have some kind of a plan. If you just throw it away like nothing then that seems like an awful waste to me. Particularly since Hopper literally died to try and give her a better life. Surely throwing the money away would be a disservice to his memory.

Beyond that Louisa is a fun character. She has a good disposition and does her best to have fun. She was content even without any money in each scenario so it’s not like she’s very high maintenance. She has a lot of bad luck though which is definitely unfortunate. Things just don’t end up going her way which is most unfortunate.

Overall, What a Way to Go is a pretty interesting idea for a film. It’s certainly hard to frame being rich as a bad thing but I suppose if your husband is going to die immediately after you get rich each time then I can see why that would be an inconvenience. It’s just not worth it if you have to have the money by yourself. The film would be even better without the rebounds but then you would have a totally different film. I do think that it starts to lose steam towards the end as it just doesn’t shake things up as much as the opening half. It should have gone a little crazier and had the characters be more exaggerated in order to end on a high note. Still, this is a good film and I would recommend it to anyone looking for a good rom-com.