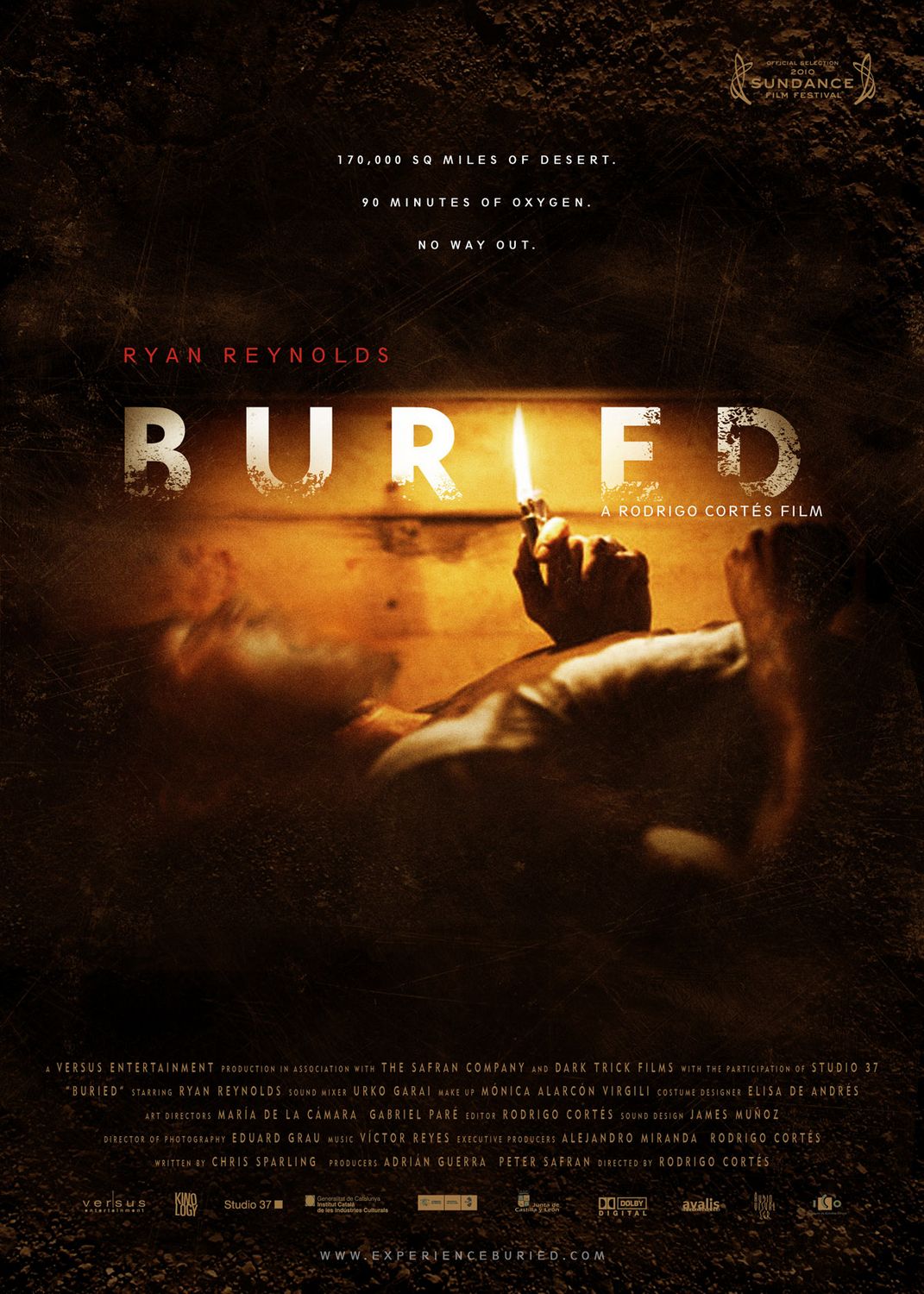 This review is of the edited TV-14 version of the film. All thoughts below should be addressed as such as a review of the unedited version would be more negative
Being buried underground is definitely something that would be tough to deal with. In most situations if you’re stuck somewhere you figure that there has to be a way out. If you’re underground though then you’re really stuck. If you try punching your way out then the dirt will fall in and crush you. You have limited air so you can’t stay underground and going through the sides will have the same effect as going higher up. In a way your best bet is going down and hoping there’s some kind of tunnel but the odds of that are incredibly low. So…it’s a pretty tough situation to deal with.

The movie picks up with Paul waking up in a coffin underground. He is unable to escape and really has nowhere to go. The only items on him are a pen, glowstick, cell phone, knife, and a small carton of water. He will have to try and think of a way to get out here but it won’t be easy. He was a truck driver who went on a mission to Iraq in order to help people. Unfortunately his men were all shot and then he found himself here. The person holding him hostage says that he will only free Paul if he gets the guy millions of dollars by the end of the day. That’s going to be a hard sell but Paul will have to try and make some calls.

Now, usually in situations like this I say you can’t give in to the demands because they’re not going to save you anyway. Like in this film the guy tells Paul to make some videos and injure himself in the hopes of being let go. You feel like the guy is going to leave Paul to rot anyway so why give in to the demands right? If someone holds you at gun point and tells you to get into the car I’d say your best bet is to run. Worst thing that can happen is he shoots you like he was going to anyway after all.

This one is unique so Buried did a good job of limiting the options here. Paul is already buried when he wakes up so there is absolutely no escape for the reasons I mentioned in the intro. His only hope is making a phone call. To his credit, I can’t say that there are any things to really have been done differently. He calls a ton of people but he’s somewhere in Iraq and has no idea where. He’s underground as well so the odds of anyone finding him are pretty slim. His best chance is to keep on calling but that can get tiring.

The only thing I could call him out for was keeping his lighter on so much. That will definitely get rid of the air extremely quickly. It’s a high pressure situation of course but I’d like for him to have kept it off to at least buy himself some more time., He does tend to fly off the handle quite a bit as well. The people on the phone were usually not very helpful either.

This movie is very serious to be sure but there were a few callers that were so outlandish you almost felt like the film was trying to throw in a little humor. You had some people who couldn’t understand a fairly simple recount by Paul who was explaining how he got buried in here and then a lawyer calling him from Team Corporate with some bad news. There’s even a scene where as Paul is explaining things the screen keeps on zooming in on him. It felt like a parody moment but I suppose the idea was to show how many times he has to repeat the same exact story and each time nobody is very helpful. So that was definitely pretty intense.

Now, while I give the film points for originality and thinking of a new scenario, I have to take away points for almost the same reason. First of all, Paul is stuck in a coffin for the duration of the movie. That means there isn’t really anything happening for large portions of the story. It’s pitch black when he isn’t using the lighter or the phone. There’s a lot of time with him just rolling and trying to make a call to someone. As a result the film is very slow paced. It’s interesting but you can forget about it having any replay value.

Additionally, if I were the film I would have kept it as more of a suspense thriller and kept the hostage situation out of it. Things escalate once the calls start coming in and this becomes a much darker movie with the realization that Paul isn’t the only one in a predicament like this. The whole situation is out of his hands and just gets progressively worse and worse as the movie goes on.

Buried’s ending is also pretty awful. It was bad enough where the film nearly lost everything but I’ll keep it at a point for at least trying something new. I do think the idea is interesting but honestly it would be better with two people. They can be in separate coffins with walkie talkies or just a slightly bigger one but it would help for banter and dialogue. I don’t think you can really effectively have a film with just one person. The people on the phone help in terms of dialogue but it does get old very quickly.

With two people you can still have a whole lot of banter or at least the ability to bounce ideas off of each other. Otherwise you’re just too limited in what you can do and that’s something that happened to this film really quickly. If you threw Paul a bone like some kind of tangible hope he could grab onto that would be good but as you listen to the guys taking his calls you don’t expect he is in a great spot. If I were Paul I would have answered the corporate call very differently by the way. A bunch of well placed “No” answers would have really wrecked their plans at the very least.

As a main character Paul is good. He seems like a reasonable character who was just trying to do the right thing. Unfortunately he was in the wrong place at the wrong time and it ultimately ended up costing him big time. He really has to go through a lot during the movie and never really gets a chance to rest.

Overall, Buried has an interesting premise but I wasn’t a fan of the execution. The whole movie feels just like that…a slow execution. Paul is slowly watching as his time is running out with the air getting low and help always seeming so far away. Death by suffocation is definitely a really tough way to go. It’s not as bad as drowning in my list but it’s all relative once you get to the grisly deaths like that. He has to go through the whole movie with that fear in the back of his mind as he doesn’t know if he’ll live or not. Throw in the random snake, Terrorists, and having to watch other people die on the phone and you’ve pretty much got Paul under torture for the entire film. Buried isn’t a pleasant watch and I’d say to skip it until they announce some kind of reboot or remake which may be able to change things up and give you a better experience.