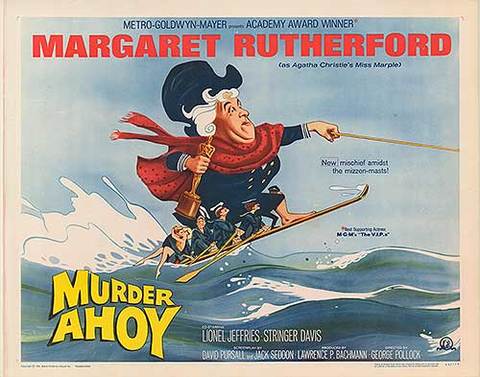 Time for the final Marple movie in this era. This time we’re on a boat which is definitely the most drastic change in scenery yet. It’s a fun way to end the adventure with the commander of the ship being one of the most interesting suspects in the whole series. Mix in the solid fundamentals we’ve come to expect in this series and you’ve got a winning film on your hands.

The movie starts with a meeting of the trustees for a nearby battleship. Marple is here of course and throughout the whole meeting one of the trustees is trying to say something but nobody will listen. Finally it’s his time to speak and unfortunately he dies before he can say what was on his mind. Marple knows that it was something serious though and the answers are aboard the boat. She manages to gain access as a trustee but the crew wants her to leave immediately. Marple will have to solve this case before they throw her overboard but any one of these sailors could be the culprit.

As mentioned, I enjoyed the captain quite a bit. He is used to being king of the vessel and so having someone with her rank here diminishes that quite a bit. Additionally, he had to give her his room so now he is stuck with a smaller one. Throw in the murders aboard the ship and it seems like she is ruining his life. He needs to get her out of here but she effectively outranks him so that will be difficult as well. The Captain is in quite the jam you could say.

Meanwhile she also has to watch out for the Inspector who has never been crazier. He even wants to arrest her at one point but his boss prevents this from happening. The Inspector doesn’t even want to here her side of the story and is convinced that Marple is not going to be very helpful here. Clearly the guy doesn’t really keep track of his own adventures because that just doesn’t make any sense. His promotion was only thanks to her after all.

Still, he’s the best character as per usual here because he just makes for such a good antagonist. You know he will lose at the end but he definitely gives her a good run at times. Springer also gets to help out here in his most dangerous role yet. Having to stay up all night and evade the police isn’t exactly an easy task to do. He goes to great lengths to help Marple and ends up being a very loyal friend.

As for Marple herself, well this time she gets to put her sword skills to good use. It was a nice way to see her turn the tables here since she now has a whole lot of ways to defend herself. It was an impressive battle and while she would lose in the end, at least she wasn’t going to make things easy on the guy. She is always coming up with plans and even out smarts the captain at one point. Marple’s a very solid all around character and works well as the lead.

There are quite a few suspects here as always. You have one lady who is playing the field as she leads two guys on at once. You have the two guys who naturally dislike each other as a result and you have the 2nd in command. Any which one of them might have a secret aboard the ship but it’s hard to say who without some more evidence. Additionally, this is a boat where they are training a lot of cadets so Marple needs to be discreet or she will arouse everyone’s suspicions as she walks around.

You’ve still got the quality soundtrack here as well as the tight writing. The fun thing about the series like this back in the day were that they came out so often that each film feels really similar. All 4 films act in the same way with the only difference being the storylines. So if you liked one film then you would like them all and it was a safe bet to just check out the whole series. You don’t really see that as much now as usually a series will change things up in each installment. The Murder series is really a product of its time in that respect.

There’s something nice about seeing the characters and just enjoying a new adventure with them each time. This series really got that down to a T. There is a bit of a rushed romance subplot at the very end of the movie which comes across as odd but I suppose it gave the captain the end of his character arc. It would have been nice if he hadn’t damaged the sword in the process though. Even if it wasn’t as important as he tried to act, it was just a shame to see it go like that.

Now, while he was fun, I do think he dug most of his own troubles up. He wanted Marple to go and yet he is the one who offered her a chance to stay. I know it was just him pretending to be polite but even the rest of his team had to let him know that this was super sloppy. If he had said almost anything else then Marple would have had to force her way in and the optics would have been really different. By pulling this stunt it just made her job a lot easier.

Overall, Murder Ahoy! is a solid way to end things off. For once even Springer actually got to help in the climax which was nice. Surely this time the Inspector can’t ignore Marple but if we had gotten more sequels I’m sure he would have found a way to do so. If you like a good mystery film then this is a good one to check out as well as the first 3 films. They’re all rather stand alone with the Inspector’s promotion being the only reference to the older films. The movie is over very quickly and I have no real complaints. It’s just a pleasant mystery title to check out.