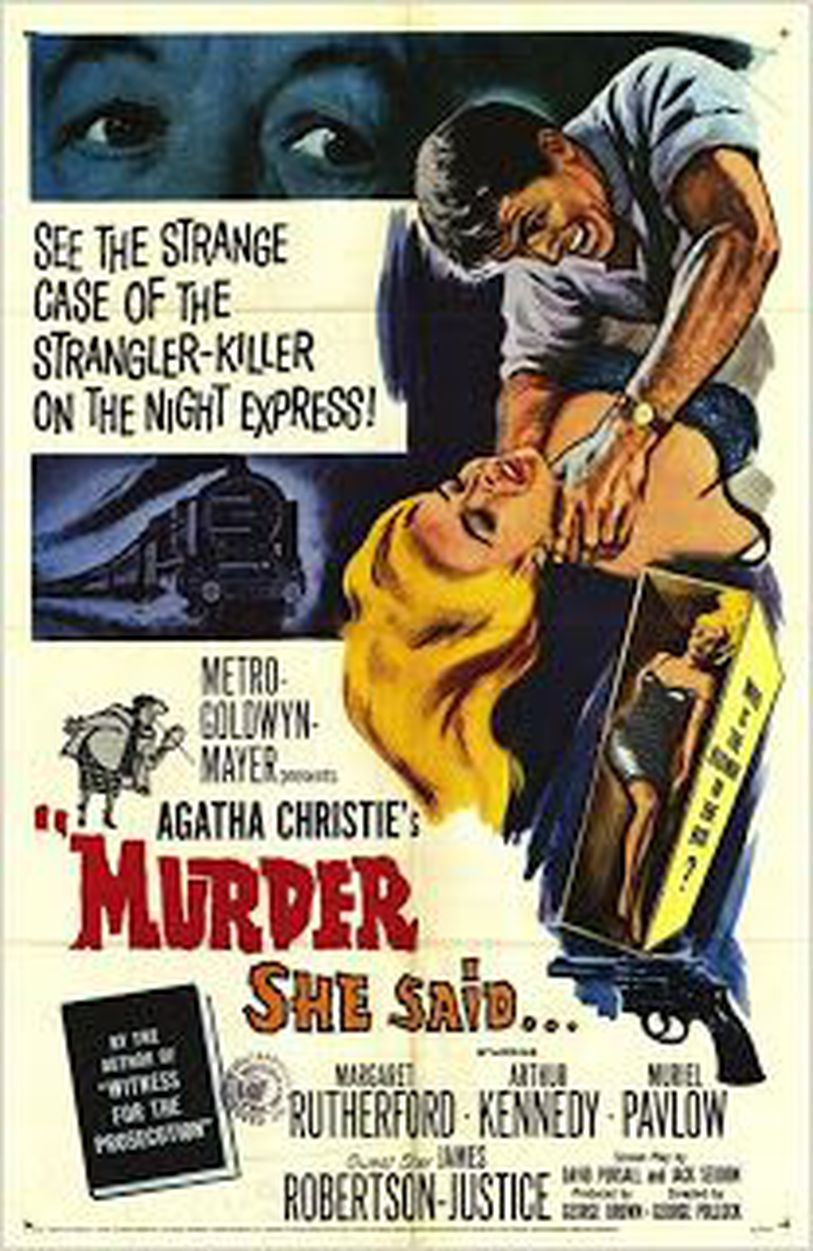 It’s time for my first Miss Marple film. I definitely am not too knowledgeable about her compared to the other detectives around but the film was quite solid. It has really high quality writing as you would expect from these retro mysteries and I also thought it took a rather unique take on the genre. As an elderly woman, Marple has to be careful when solving these mysteries that she isn’t put in imminent danger.

The movie starts out with Marple noticing someone get strangled on a train. She reports this to the conductor but he doesn’t believe her and the cops don’t but it either. What are the odds that she could have truly seen such a murder from a different train at high speeds? Making matters worse is the fact that she was reading a murder mystery so everyone figures she lost her mind. Her only friend Stringer believes her but what can they do about it?

Well, the two of them do some poking around the train site and manage to figure out that the main suspicious location is a nearby manor. Marple gets herself hired as a maid and now she will be able to do some sleuthing with plenty of time to spare. There was a recent death in the family so now everyone is getting ready to get the money so you can probably guess who the suspects are. Every person in this family is absolutely a suspect so Marple will have to do her best to find the right person before she is murdered. Fortunately she will have the aid of a very inquisitive kid.

Another difference with the Marple series compared to most is that she will always get herself hired or involved in the location itself. This requires actually getting a job in several instances like this so she has to find clues between shifts. As a maid she is kept quite busy but does really well even considering that she is older at this point and not very fit either.

Miss Marple is not running low on confidence though and gets a lot of good lines throughout. She isn’t intimidated by these suspects in the slightest and just keeps on going as she normally would. She’s very methodical about getting the clues as well and does a good job of slowly tightening the noose around the villains.

Then there’s the kid although I can’t find his name anywhere. Needless to say, I was quite impressed with him as the kid was actually not annoying for a change. This is very rare for a kid since they tend to drag each scene down. This guy actually had some wit about him though and also didn’t desert Marple when they were nearly caught. He’s fairly brave as well and even knows how to scare people off. This is exactly the way I’d like to see all the kids look and it’s certainly a credit to the film’s writing.

While the Inspector would go on to get much bigger roles in the next few films, this was a good debut appearance for him. He certainly doesn’t believe Marple theories much but it isn’t yet personal in this film. He just has his own way of doing things and doesn’t want to be slowed down all the time. As long as he learns his lesson in the next films then he won’t look bad but….we’ll see how that goes. He’s always entertaining to have around though.

As for Springer, he’s a lot more cautious than Marple. She really ends up causing him a lot of stress throughout because of her dangerous tasks. It’s not like he can just walk in and help her out if anything happens either so that wears him down. I like his enthusiasm though as he will always try to help out even if he has absolutely no idea what is going on. He had a fairly good job at the library too but is ready to drop everything when she needs help.

As for the actual case, it goes pretty well. There are just enough family members/suspects that it’s hard to remember just about any of their names but they’re all suitably suspicious. You could close your eyes and just pick any with how incriminating all of their dialogue is. It makes for a strong opening case to start the series out. I would say there are enough clues where you can try to complete the case on your own as well.

There are always a few extra wrinkles thrown in to trick the police so you’ll have to watch out for those as well. In a way it’s a good chance to see if your theory is right because if the inspector says that this is what happened…you know that it did not. A shame certainly but that’s just how it goes since you know Marple will be the one to bring out the right theory.

Mysteries can come in many shapes and forms. You can have a very serious one, a fast paced thriller, etc. This one is more of a slow boil mystery that’s quite light hearted and it works well. Marple wants to help make the world a better place and sure there are murders and everything so this is serious but the movie has a lot of happy music throughout which is why I’d consider it fairly cheerful. Marple even has her own theme which will continue to play in the next few films as well.

You also get to see her life around the town a bit. She sips some tea while discussing the case with her friend and it’s all rather peaceful. It’s s calming environment which likely helps her focus and collect her thoughts. You’d barely believe that a murder just happened but it’s this hybrid of serious and calm moments that really makes the series work. I wouldn’t say it matches up to Sherlock Holmes or Poirot but I would take it above Nancy Drew and most iterations of the Hardy Boys.

Overall, Murder, She Said is a good way to start things off. It’s always fun to see the opening movie in a series so you can see which characters and running gags will continue. The writing is definitely on point and the films have good pacing. You won’t be bored while this is going on and it all moves in a very brisk manner. I’ll have a review up for the first sequel shortly.