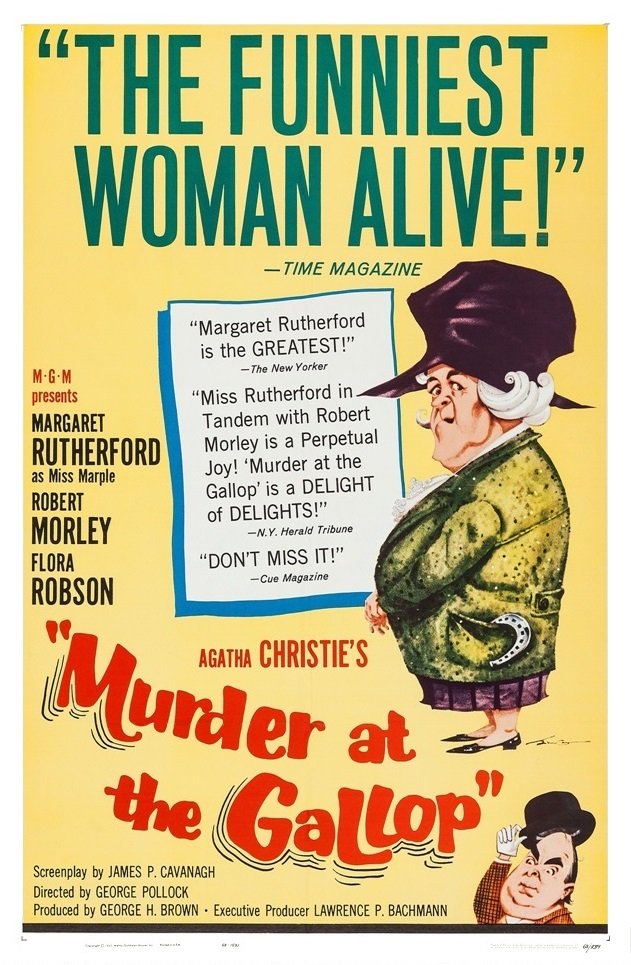 Miss Marple is back in action once more to stop the upcoming murders. We once again deal with a will and a bunch of very suspicious family members. This time though Marple will have to make sure that her horse riding skills are still on point because otherwise this could get a little tricky. It’s a solid follow up and continues with most of the positives that you would have enjoyed from the first film.

The movie starts with Marple and Springer collecting some funds for charity when they visit the house of someone who notoriously never gives his money. He won’t be given the chance this time though as he is dead. His family shows up for the will and they each get a nice chunk of real estate but one of them says that he was murdered. Before Marple can properly check with her, this lady is murdered as well. Now this definitely seems like it can’t be a natural death so Marple joins the horse club as she explains that she was a bit of an expert back in her day. She will have to do this without the aid of the police since they believe the earlier deaths were due to natural causes. Marple may be on her own but she isn’t dissuaded and will fight hard until she can get the proof that she needs.

It’s a pretty good change of scenery here at the horse club. It’s pretty much a fancy hotel out in the country side after all and there are a lot of rooms where murder can happen. Marple spends a lot of time trying to find the right boot since her main clue is something that fits into the boot. I forget what term they used for it but it looks like Styrofoam and she has to try matching it each time she gets an opportunity. Not necessarily an easy thing in a high speed place like this.

The Inspector returns of course and he’s fun as always. This time you’d think he would cut her some more slack but he doesn’t believe Marple as always. At least they hint that she calls on them a lot and we only see the successful attempts but it would still be nice for him to be on her side this time. He does try his best but the guy is completely out of his depth in these cases.

Part of why he’s still a great character though is because he does try really hard. No matter how many times he is proven wrong or outshined by Marple, he continues doing his best to try and serve out some justice. Now that’s the kind of attitude you need to have as an inspector or else you will quickly fall behind.

As always Marple is a solid character as well. She is good at getting right into the thick of the action and also doing so in a way where the police can’t just remove her. Like here for example where she is a proud member of the hotel right now. They can’t just boot her out and it’s a very clever way of also pressuring the criminal into making a move.

I should also mention there is a bit of a running gag from the first film that continues here where someone falls in love with Marple at the very end. That happens here as well and it shows that while she makes a considerable amount of enemies in each film, people just tend to like her by the end. It is impressive to find an older lady who is still good at so many things but that’s just how good Marple is.

It goes without saying but the writing is solid here as well. The mystery is put together in a very solid way and the script is on point. The pacing is good and you’ll always enjoy the witty exchanges between the characters. Part of the fun in mysteries like this is seeing all of the characters quickly affirm their innocence as they grow more and more insistent on the fact. You know that one character is lying out of his or her mind but you just don’t know who yet.

The soundtrack also continues to be high energy as the main Marple theme plays whenever she is on the go. The fact that the soundtrack is memorable at all is impressive since a lot of films just don’t have a whole lot of music to keep you entertained.

It is nice how for once nobody has a proper alibi when the police show up. It makes sense though because in a hotel like this you would often be by yourself. 9/10 times in a movie like this I would have no alibi because I probably would have just been playing video games or eating somewhere. Of course some of the characters are quite happy to say they have no alibi but it’s hard to say if that makes then more suspicious or just bigger jerks.

Marple’s final plan involving a dance is a good way to get the villain to lower their guard even if it’s extremely risky. One thing you’ll notice about Marple is that her plans are as dangerous as they come. This one for example involves her pretending to be asleep and all alone in her room. It all tends to work out but in several cases you feel like she would have been murdered before anyone is even able to get close enough to save her. That’s my main critique of her strategy since I don’t think the results mean that the plan itself was sound.

Overall, This was a nice follow up to the series. Looks like the murder mystery series is on the right trail and Marple can hold her own with the rest. I’m slowly getting to learn more about her which is nice because if I ever watch Murder by Death again I’ll have an even better understanding of each detective. You can expect the third movie in the series to be reviewed in the very near future.