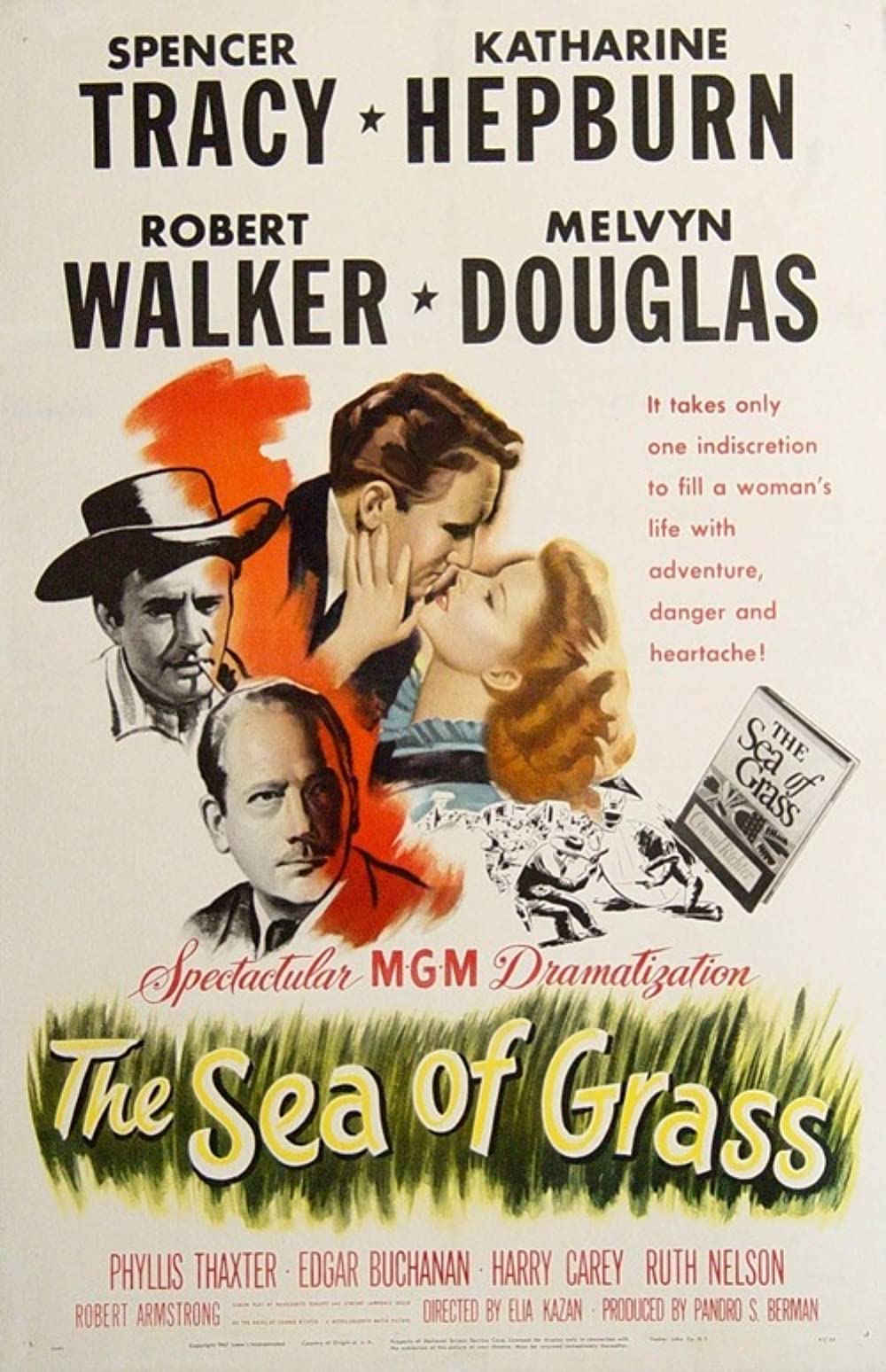 It’s time for a very dramatic romance film where quite a lot of tragedies occur. Sea of Grass isn’t what I would call an uplifting movie but it is well written. You’ll be invested in what is going on from start to finish so even though the film is long, I wouldn’t say that it really drags on. If anything it’s impressive how the journey keeps changing as the characters grow older to the point where it’s like there are multiple movies squeezed into this one.

The movie starts with Lutie getting ready to meet up with her fiance Brewton. He’s the owner of a whole lot of property but she discovers that he isn’t very well liked within the land. See, he refuses to let anyone else go onto the land to build houses and such as he believes that it will destroy the environment. As a result he seemingly attacks and drives off anyone who attempts this. The law can’t do much of anything about it at the moment and so most people resent him. Lutie is confident that she can change this though and that Brewton will at least let her friends hang out there. Well, this is going to be a much tougher ordeal than she had planned.

That’s at least the plot of the first act I’d say but of course it changes a whole lot as the film goes on. Lutie certainly was warned about Brewton early on but as they are already engaged when the film starts, I imagine she had already known him rather well so it makes sense that she wasn’t buying these rumors. It’s why you do want to know your partner rather well before making the lifelong commitment though as learning things the hard way like in this film is definitely not fun.

Right off the bat you can see how Brewton is an antagonist here. He talks in a way that makes his goals and ambitions sound noble but at the end of the day he’s breaking the law so he can keep his vast fortune. It turns out that he was correct about the new settlers destroying all of the land with their houses when they move in but it’s not his place to block them all out. Unfortunately nobody is really strong enough to stop him. As the film goes on he gets more and more desperate and it’s just hard to sympathize with him. He doesn’t listen to the counsel of his best friends and basically drives Lutie away.

Then you have Lutie herself who starts out as a real idealist who thinks she can make everything go well but by the end she is painfully made aware of how difficult this will really be. For the most part she was good but there’s one point in the film when Lutie makes the ultimate mistake and it hurts her character a whole lot. See there’s this guy named Chamberlain who was openly flirting with her from the start. She tries to defuse the situation by openly talking about this with him but he’s not the type to take no for an answer.

Ultimately she relents and has an affair with him. While she breaks it off in the end it takes too long and this causes some more issues due to her having another kid. It causes a whole lot of drama in the second half and it’s the only angle where Brewton does get a lot of sympathy here. It’s going to be really hard to ever trust his wife again after something like that and in a way it’ll also feel like Chamberlain “won” now that he will have permanent proof of their affair. It makes Brewton’s life in the town even worse and of course Lutie has to deal with severe feelings of guilt after this.

So the movie made sure that the two leads were deeply flawed by the end of this. Naturally I didn’t like Chamberlain as the guy knew Lutie was already married but kept going after her regardless. I never like that kind of character and he clearly did not have much respect for her to be going with such tactics. He just put on pressure until he won but that only serves to hurt his character even more.

Brock is Chamberlain’s kid and he gets a big role in the second half. He’s a very rebellious kid who is always a little out of control and nobody really tries to reign him in. In a wild west town like this one with guns everywhere, that ends up being a very dangerous situation to be in. Then you have Brewton’s kid Sara who was nice. She looked out for Brock as best she could before being shipped off to school and did her best to protect Brewton as well when she found out Lutie was coming to town. Sara may not have given Lutie much of a chance but from her position it made sense even as Jeff did his best to talk positively about Lutie.

Jeff was easily the standout character of the movie though. He helped Lutie fit in with the crew at the ranch right away and always had her back. He did his best to make sure she was okay at all times and was really the only person she could count on for the full duration of the movie. The guy had a lot of fun moments and really helped give the movie some light hearted moments. At the end of the day he really took a lot of risks in helping her out like this as well.

So as a very somber romance film with the two leads being completely unlikable after a point you may wonder if the film itself is any good. Well, I would still say this is a good movie. I may not have liked most of the characters all that much but the story is strong and I was engaged with what was going on. It’s quite sad a lot of the time but without trying too hard. You don’t have sad music playing on loop or things going too wrong for the characters. It’s just sad enough where the whole thing is emotional without feeling forced. The script is solid and the pacing is on point. The film can feel long at times but not really in a bad way, it just feels like you’ve gone through a lot by the end with how many time skips we get.

Overall, The Sea of Grass is a film that may not sound all that exciting on paper but it’s a good movie. I would have just changed the brock subplot so it’s more like Brewton suspected that Lutie cheated while she denies it. That way with Lutie saying that she didn’t go all the way with Chamberlain you can believe her and the character isn’t really hurt in the same way. Cheating’s just a really tough thing to get past for a character, especially in one movie. Otherwise you did have Jeff to carry the film and this was a very complete adventure so you’ll be satisfied with the ending.