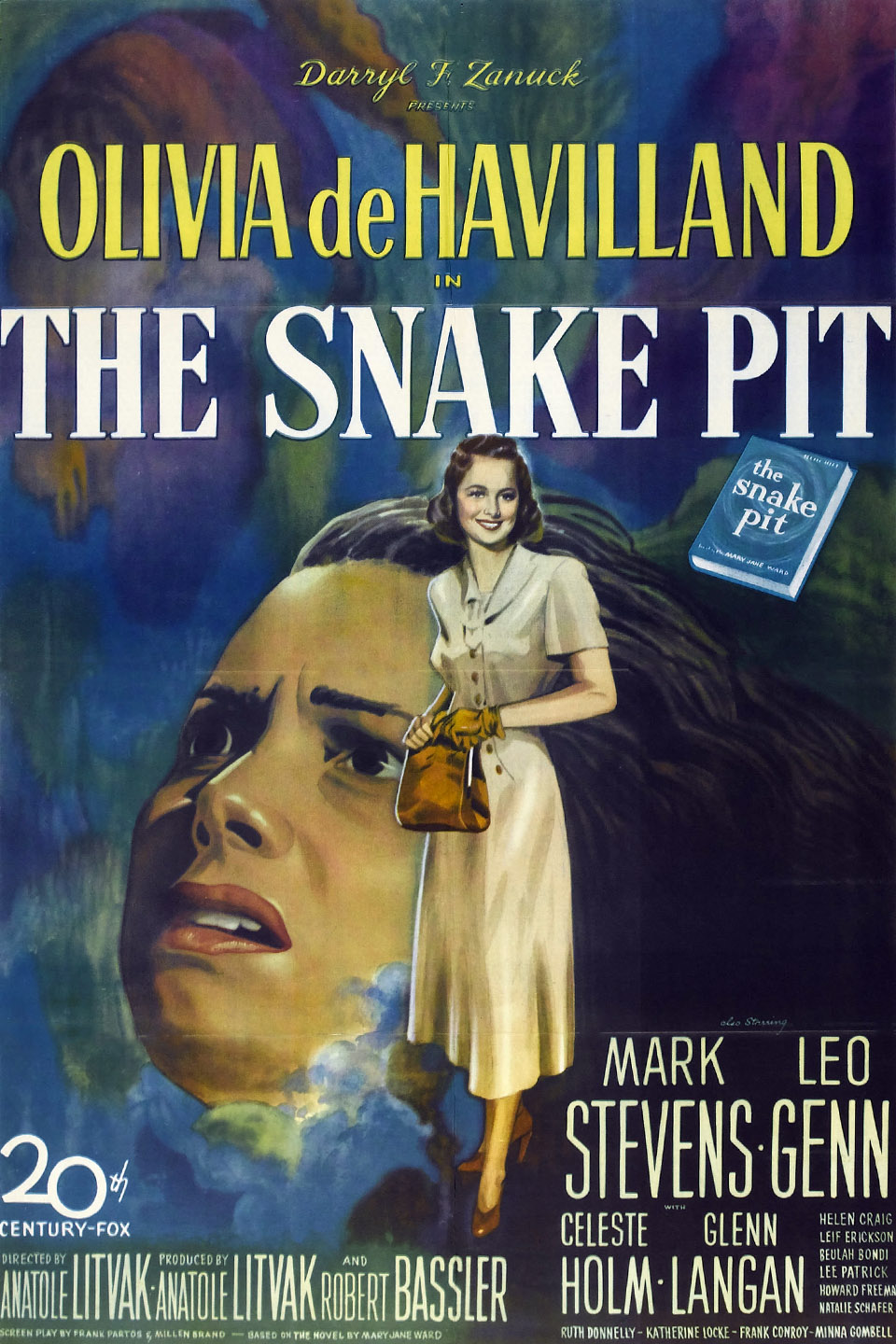 With The Snake Pit I was on the fence about whether I should make this a full film review or since it’s based on a semi-autobiographical novel make this one of those non scored film look throughs. The names are switched of course but based on the book quite a lot of this seems to be based on her adventures if the book is to be believed. Semi-Autobiographical seems like an odd term since I guess some parts are true and some aren’t….Well mix that in with how the film apparently changes some things as well I’ll just go with the review approach on this one.

The movie starts by introducing us to a lady named Virginia Cunningham. She’s currently staying at a hospital because she has grown insane over the years. She is married to Robert but no longer recognizes him and has a lot of voices in her head that cause her to doubt things further. She has no real memory now and tends to go off on tangents. Right now, she is in one of the deeper wings of the hospital with other people currently having mental issues and there doesn’t seem to be a lot of hope. Fortunately, Dr. Kik takes an interest in her case and decides to cure her. Will he be able to pull this off and what caused her breakdown in the first place?

The film isn’t a mystery title but it does follow that kind of formula where we slowly begin to learn more about her backstory as the movie goes on. At first we have no context for what happened to her but Kik begins to bring this out slowly but surely during their sessions. Of course that in itself is a big part of the mystery so I won’t be saying what the results were. Needless to say, a big thing here is moving on from the past and trying to reclaim your life again.

Virginia is a good main character and the voices in her head are always entertaining especially when they’re arguing with each other. One might say “Smile” but the other one quickly responds with “Careful” so Virginia isn’t sure what to do. These debates are usually very quick but always fun. Naturally the voices start to vanish as the film goes on but they help make everything feel like a conspiracy. At one point she even thinks that Roger may be fake and the whole thing is a trap. Now that would have been crazy if that ended up being the case.

Virginia does her best to recover even though she is sometimes put in tricky situations like with Nurse Davis. Davis didn’t like her from the start and that definitely slows Virginia down near the end. For the most part Virginia gets along with everyone else though and she is a nice character so that makes it easy to gain allies here. She even helps some of the other patients start to recover with how supportive she is.

While the film’s pacing is pretty good there was one act that I think could have really been cut out. Throughout the film we see Virginia’s journey upwards. In this hospital you start at a low numbered ward to show that you are still quite ill and you move up as you start to recover. If you make it to Ward 1 then you’re about ready to leave. So it was a clear cut journey and then right when it seems like you’re at the end of the film….they send Virginia all the way back to the end in Ward 33 or something like that. It’s like completing a video game at level 100 and suddenly being forced back to 1 for New Game+.

I thought this really only served to drag the film out a bit and definitely could have been cut out. The film had been moving really well before that with no issues or anything like that. This was the only part of the film that felt a little boring at some points because it just seemed like we had been through this already. This ward was even worse than the one Virginia was in at first so I guess that adds to the tension but it just wasn’t needed.

The supporting characters were solid. First you have Robert who really wants Virginia to be well at soon as possible. He ends up rushing the process at one point which doesn’t work out so well but you can see why he did this. In a lot of these films the wards end up having some kind of sinister twist to them and she seemed well enough from his perspective. He was consistent about visiting her every day and not giving up so you have to give him a lot of credit there. He was definitely someone she could count on and really lived up to his part of the vow.

Then there is Kik who ends up being quite solid. At first I had my reservations about him, particularly when he was recommending shock treatment since 9 times out of 10 that’s a really bad idea. He did know what he was doing though and it all worked out pretty well. In the end he was the most reasonable doctor there and definitely a master of his craft. For once there was no dark secret here or nefarious intentions. He just wanted to make her better.

As for Virginia’s backstory, well it was definitely an intense one. It’s interesting seeing the events from her point of view as well since you can’t trust anything 100% since she is framing it in the way that she wants to see things. You may be a little skeptical at how this causes the complete breakdown later on but I suppose you can never know what will be the trigger. I didn’t think it really explained her more violent tendencies so well but either way aside from the bite she never attacked anyone so that may have been a more mild effect.

Overall, while the film deals with a lot of darker themes here, I would say it’s an uplifting movie overall. It’s got a very clear journey of recovery as Virginia is able to regain her senses and be normal again. The character cast is good and the writing is solid as well. The only part of the film where it hits a snag is with going back to the final ward. It just felt like a big way to lose momentum and give us events we had just gotten past. You could easily have cut out moments like the dance and all related plot lines as well. Ultimately if we had to go in this direction I would have had her start out in Ward 33. At least it does explain the Snake Pit title for the film by the end.