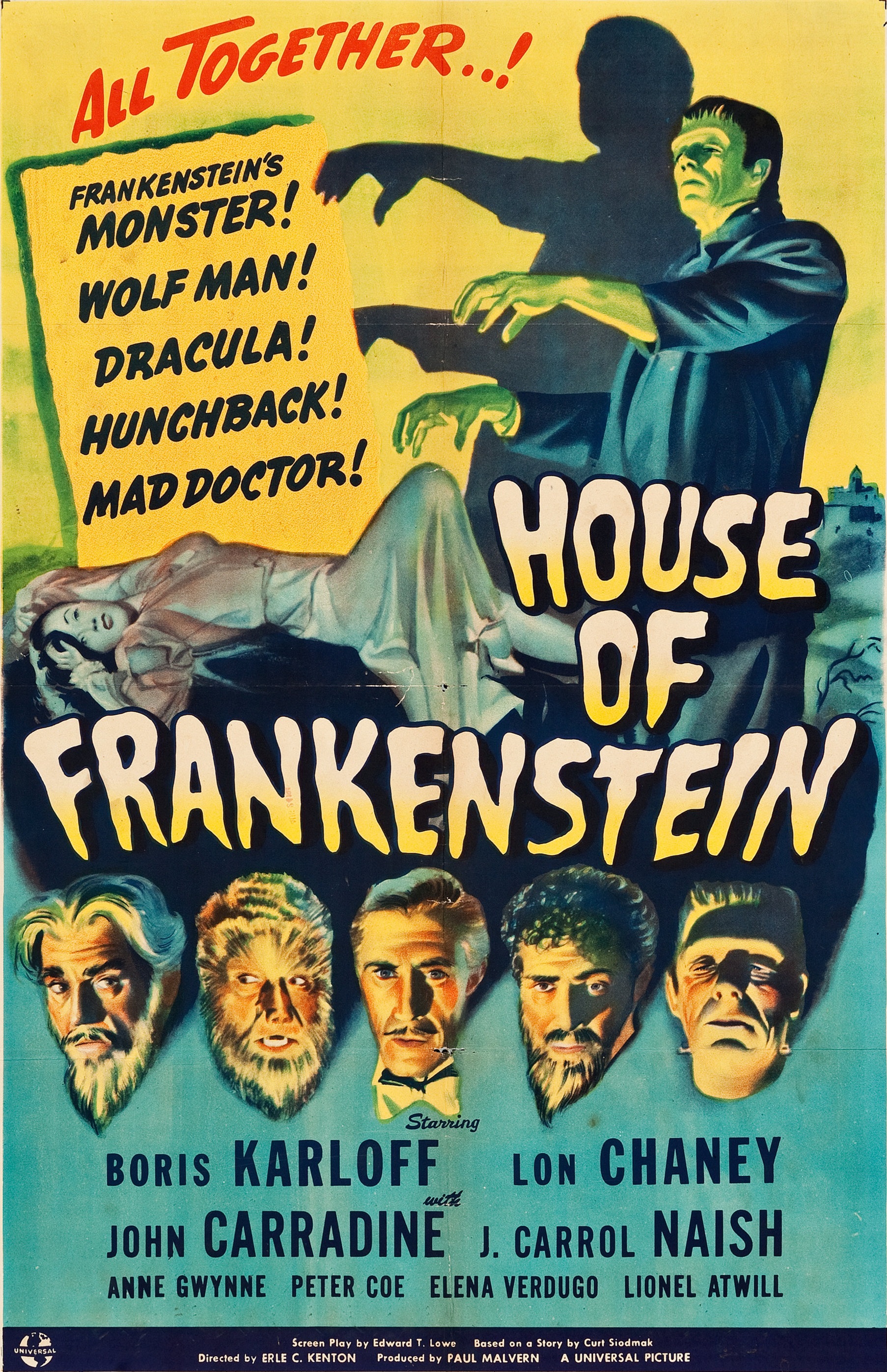 The House of Frankenstein is a big crossover with Dracula, The Werewolf, and Frankenstein’s monster. Once again I found myself impressed at the continuity here with the same settings reappearing and the movie actively acknowledging previous ones. It’s definitely a fun film and really my only issue here is that none of the 3 monsters get to interact at all which is a shame. Dracula shows up in the first act, the Wolfman makes his move in the second, then Frankenstein acts in the climax. Seeing them all duke it out would have really been a blast but the story is strong enough where you don’t need the monster action to have a good time. With good writing and solid characters, the movie was in a good spot from the start.

The movie starts off with Niemann finally getting out of prison along with his loyal sidekick Daniel. (The guard looked awful in the first scene when he got close enough to the door to be choked though. Doesn’t even seem like this was the first time that happened and the scientist is surprisingly strong to do that considering he doesn’t look like he has lifted weights for a day) The villains want to find Frankenstein’s journal for different reasons. Doctor Niemann so that he can finish the research and do some body swapping and Daniel so he can shed his hunchback form and look like a normal person. They murder the guy who got Dracula’s body and head off to the caste where the monster and wolfman were last seen.

Now you have to give the scientist Niemann a lot of credit here. He is extremely well informed to the point where he knows the wolfman’s whole life story. This guy knows the plot of the last film and what the wolfman was doing at the castle. Furthermore, he is able to threaten/blackmail Dracula himself. Now Dracula fans won’t be thrilled at his appearance here because he looks utterly disgraceful. I would go as far as to say at the worst a Dracula has ever looked in a movie, even worse than his slipping and falling off a cliff in an earlier film.

This Dracula is terrified of Niemann and doesn’t have enough strength to overpower him either. What happens is Niemann awakens Dracula by taking the stake out and then threatens to put it back in of Dracula doesn’t obey his every move. It seems like Dracula considers trying to overpower Niemann but then realizes this would not work. Niemann sweetens the deal by saying he will guard the coffin and Dracula is very quick to swear his undying allegiance. You’ll probably be dying laughing instead at how this guy has fallen. It’s even worse when you see how quickly he is dispatched.

One of the strengths of the film though is how each villain brings his own cast in. For the Dracula part of the film we get to meet a group of characters who even seem like they would be the leads. You have the main heroine who is ready for a good adventure, the skeptic who doesn’t believe in vampires and such, the police chief who thinks something fishy is going on, and the heroine’s husband who is cracking lots of jokes. Once Dracula is gone these guys are quickly written out to the point where we never know exactly how their situation ended up. You will have to imagine how all of the reactions were.

Once we get to the Wolfman, Larry Talbot then we are at the emotional part of the story. Larry is still cursed with being a werewolf so he’s hoping to die at this point which is a really dark plot for such an old film. The problem is this is very difficult since it’s like the Hulk where the werewolf has some regen and can’t die easily. The only way is with a silver bullet from someone who loves him. Larry agrees to work with Niemann since the guy promises to give him a new body. Of course that guy is more interested in running other experiments so he takes his time with him. I really question Niemann’s decision making though since each full moon runs the risk of Larry murdering him. I feel like Niemann never even considered that possibility though which is odd.

I always liked the Wolfman so it’s cool to see him appear here. He is certainly the most heroic of the monster group although I suppose that really isn’t saying a whole lot. He is just cursed to transform against his will which is really a rough fate. As for Frankenstein, there isn’t much to say about him because he’s pretty much a mindless monster. He does true to protect Niemann so perhaps he sees the guy as his creator. Either way he still has his weakness to fire though which is always tricky. It was satisfying to see him take down Daniel really quick though since that guy was the new super strong monster and I was rooting for the original to take that round.

Daniel is a character with an emotional backstory too of course. He can’t find anyone who loves him with the hunchback appearance so he follows Niemann in the hope that the guy will cure him at some point. At the end of the day he is still a villain who will murder anyone in his way though. There is a brief romance plot with Ilonka who goes around leading on Daniel and then crushing on Larry. It’s safe to say that this plot was never going to have a happy ending in this monster film. Particularly as she only helped to put Daniel on the darker path a lot sooner than he would have otherwise.

The ending of the film is actually pretty funny. While the film is taken seriously the whole time and I can only assume this is for the ending as well, it’s just the way that it all happens will make you chuckle. Niemann certainly had quite the ending, that’s for sure. In fact, you could say that each of the villains really paved the way to their own demise without the heroes having to do a whole lot.

Overall, this was a really fun film. I still think it loses some energy by not having any of the 3 monsters interact though to the point where the Dracula part feels like a completely different movie with different supporting characters. The pacing is solid though and the film goes by in a flash. Also, I do like the fact that Niemann is quite strong both verbally and physically despite being an old scientist. Choking out the guard was still incredibly impressive and then of course threatening/blackmailing Dracula has to put you up there as well. I would go as far as to say this might be the best evil scientist in these creature features. If you like seeing these supernatural monsters then this is a film that you can’t miss!