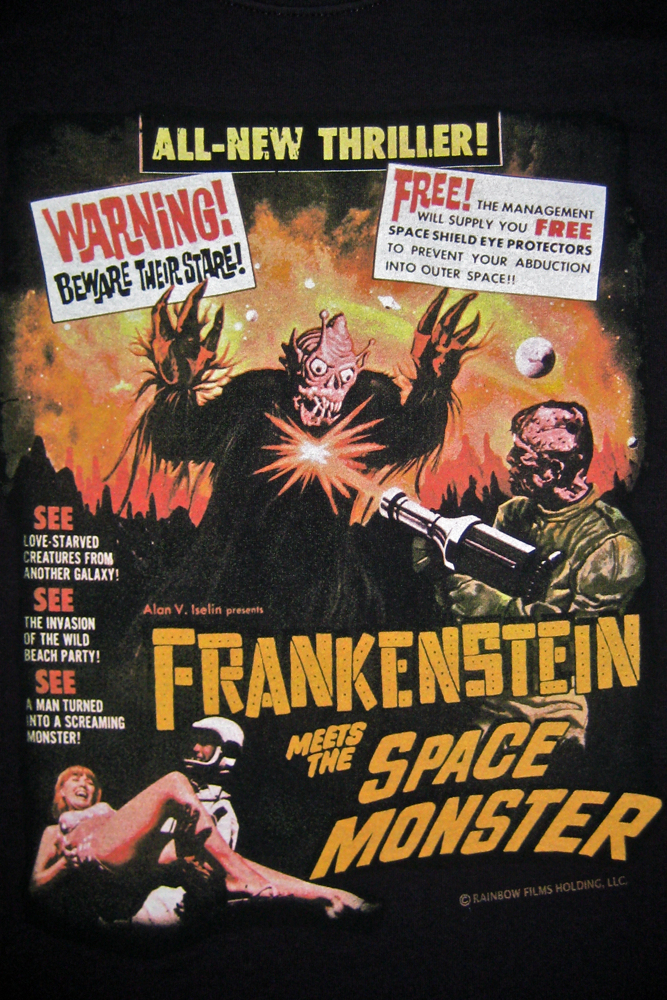 It’s a really good thing they didn’t call this Frankenstein vs the Space Monster because the fight doesn’t happen until the final 2 minutes of the film. So if you’re looking at the poster and getting hyped…don’t be. At least not for the fight. Also, Frankenstein doesn’t even appear in this film so…heh this film is taking a lot of liberties right off the gate. Now, I would say this is still a good film but it definitely could have been so much better. The writing and characters are fun so throw in a bit more action, better villain motivations and you’d really have a hit here.

The movie starts with a group of aliens from Mars deciding to head to Earth and kidnap all of the women so they can repopulate. Right off the gate I can say this isn’t a great plot. When that is the villain’s entire goal then there is no way to really like the villains or find them very interesting. That is a considerable issue because you need good villains in order to get the film to the next level. There are really three villains of note here. You’ve got the Princess Marcuzan who really just sits on her throne the whole time. She can’t fight and doesn’t do a lot of leading either so I wouldn’t expect a whole lot from her.

Then there’s her right hand man Nadir who does a lot of the actual planning. For some reason he will always stare right at the camera and grin after delivering his lines. I have a feeling that wasn’t exactly what he was supposed to be doing. Then you have the monster himself but he doesn’t do anything until the final 4-5 minutes of the film and is just caged up instead. Not a great way to make me impressed with the villain right out of the gate.

As for the human plot, well the government is getting ready to send a spaceship from Earth. To make sure there are no human risks this time, they are sending up an android named Frank. Unfortunately, he isn’t quite perfected yet as he will randomly go into a kind of stasis where he is frozen. It did make for an entertaining scene where he freezes and the camera just stays still for a while. Now you may think this could pose a problem when he is in space with no back-up but the scientists don’t see it that way. They send him up but he gets blasted down by the aliens. Now he is injured with some memory loss and has turned into a monster who will destroy anyone in his way.

Like the actual Frankenstein monster it’s hard to find this guy all that heroic or likable because he does go around murdering people in the meantime. Now at this point he can only read emotions so he just kind of goes berserk but you’d hope that he could fight the system programming a little better. The film continues to show you why sending this guy into space would be an absolutely awful decision all around. There are two human characters of importance in Adam and Karen but they are pretty much non factors here. Adam sees Frank as a pure robot with no feelings or emotions so he doesn’t feel bad when he sees how beat up the guy is. I suppose to an extent this is probably true since I don’t see this android being sophisticated enough to have a soul but at the same time it still makes him come across as rather heartless.

Then you have Karen who feels bad for Frank the whole time but doesn’t really do much to help him. She may act concerned but if you’re not going to do anything about it then it doesn’t make much of a difference. So both of these humans are rather forgettable and you’re just here for the sci-fi action anyway. I will say the writing is solid and the pacing is on point which you would expect for a retro film like this. It’s the kind of movie that just flows into each scene really smoothly.

The soundtrack is surprisingly fast paced and upbeat. It’s got some classic beach tunes and never really lets up. The fact that the film has a real soundtrack automatically means it beats most of its competitors for this kind of title. The tracks aren’t great or anything but they are memorable and give the movie a little more personality. The film may have had a bit of a hard time deciding what kind of film it wanted to be but if you take it as a really cheesy sci-fi flick then you’ll be fine.

I would have just liked to have seen a bit more action. That would have really helped the film since the whole point of a creature feature is to have some real fight scenes. What’s the point of coming up with a monster design and everything if he isn’t going to do anything until the film is ending? That just doesn’t make a whole lot of sense if you ask me. I would also get rid of the repopulation plot entirely and just switch the villain’s goals to a classic take over the world kind of plan. It may have been done before but it’s still a better plan than what the film came up with.

That’s the biggest weakness of the film. It sometimes tries too hard to be a beach type film where you have characters modeling for no real reason or having to be shown off like exhibits by the aliens. The film has more fanservice than you would expect and the scenes all feel like complete filler. All of the beach scenes should have been cut out along with this sub plot and the film would have been all the better for it. It still comes off as a storyline that’s really random. Maybe the writers couldn’t figure out how to stretch the plot of aliens attacking without this but if that’s the case, that’s not a good look. There’s so much you can do with alien invasions. For starters I would have liked seeing more of the government’s overall response to this.

Overall, Frankenstein Meets the Space Monster is the kind of film that you feel you have seen many times before. It isn’t trying anything new but at the same time the execution is good enough where you won’t be bored. As the movie goes through the motions you will be engaged. It’s always fun to see how the alien films were made back in the day. There aren’t a lot of explosions or action, it’s really a very down to Earth title..aside from the aliens of course. There is still a body count but even that feels low key. The aliens just go around blasting everyone with their fancy ray guns and the humans don’t take it all that personally. Some of them barely react. It’s the kind of movie that certainly wouldn’t come out nowadays so this is really a relic of an older time. If you like science fiction then I expect you’ll definitely like this one. One advantage to being such a simple film is that you can jump right in at any point and understand what is going on.