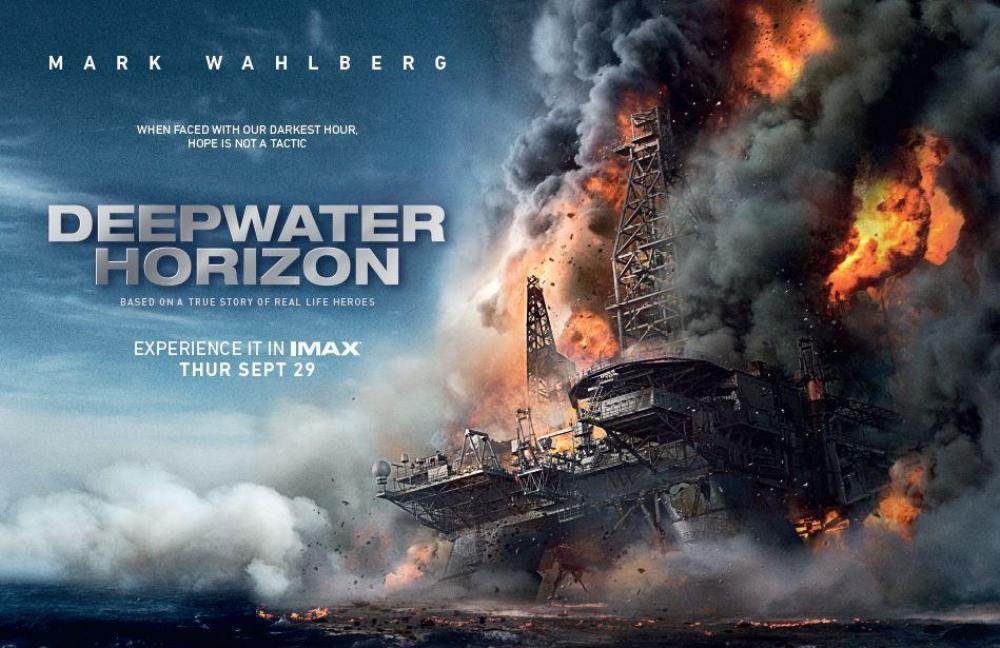 This is a film I saw the trailer for many times. It definitely got promoted heavily and even BP was a company name I knew for a while. They definitely have a ton of issues and controversies around them at all times so it’s no surprise that they would have a big tragedy like this one. Unless they had another big oil spill before then I think I even wrote a paper on this one. I just remember BP was responsible for the accident I was writing about. Well, the movie does a good job of walking through and events and makes for an engaging watch from start to finish.

The movie opens with Mike and Jimmy’s team heading to the oil rig to finish the job and get everything set. Unfortunately things are looking a little shady right from the jump as the previous team was chased out of there before they could even run any tests. That definitely doesn’t sound like a good system right? What does this place have to hide? Well, the two BP representatives do not want to pay extra money and figure they could squeeze out a nice profit without actually increasing expenses. There isn’t a whole lot Mike and Jimmy can do beyond just proceed as normal. The system wasn’t ready for this kind of action though and the whole thing blows up. Can anyone escape this catastrophe?

With a film like this where you know the story and the basic plot, there aren’t a lot of twists and turns. Of course the first act takes a while for the explosion to actually happen but you do know that it is happening so that can be a mixed bag. After all, then maybe the film should jump right into it. It’s always an interesting predicament, like Superman or Batman film where you know they will become superheroes so you want them to jump ahead. At least I would say that the leadup is solid here and you do get to have some fun dialogue with the characters.

Mike is a good main character. He’s serious about his job and knows what he is doing. From all of the characters in the film he is probably the most prepared. He has a good working relationship with everyone and isn’t afraid to speak his mind. Even if he has to talk tough to the big execs, that is just what Mike will do. He really has no faults here and that’s always a good thing since it means this is a main character you can get behind. While we do have the explosion coming for the climax, I would say the film is largely character driven so you want a good cast.

His boss Jimmy is also solid. He’s clearly been around the block quite a few times in his career and has a ton of experience. He doesn’t let himself get pushed around by BP too easily even if they do overpower him by the end. He also does his best to keep the rig afloat and tries everything possible. It’s why he has to be written out of the action for a while since he may have been able to salvage the situation a bit.

As for the two heads of BP, those guys were a lot of fun. In particular Donald is the guy who stole the show here. The guy is really confident and you want that in your main villain. It’s not like he’s intentionally trying to destroy the place either. The guy wants to make money and he needs the place operational for that but he did some research and figured he could pull this off. At the end of the day he has likely succeeded in many similar situations, the whole thing just caught up to him. Any scene with him in it is always entertaining though, that’s for sure.

The effects are on point here and the explosion certainly looks realistic. Seeing the entire oil rig go down makes for quite the spectacle. we get intense scenes of having to run through the place while it’s burning and it makes for an effective climax. You definitely wouldn’t call the sequence boring or anything like that. It all just happens quickly and everyone has to find a way out. I was glad that nobody on the crew was being super unreasonable…until we get to one random guy.

So even with explosions coming through and all, there’s one character who refuses to send out an SOS and doesn’t even let his colleague try to press some buttons to make things better. He keeps yelling that they don’t have enough clearance for this and it felt like such a bad hill to die on. This guy is really going to get in everyone’s way because he doesn’t have the proper rank? Now that’s a way to mix up your priorities when it really counts. He’s got to be the worst character in the film due to how exaggerated the whole thing was.

There’s also a heroine near the end who starts to break down quite a bit when it’s time to escape the ship. Mike basically has to trick her to pull this off which makes her look really bad. Cmon now, jumping into the water is really a great plan. You still might die, but at least it’s not guaranteed. At least Mike was ready for even this situation and showed some really quick thinking.

The only thing I would say about the the film as not being super positive is I do think the ending can be a little overdramatic at times. When the characters arrive home you immediately have someone attacking Mike and nobody steps in to help for the longest time. I would hope there would be a little better security here trained for tragedies like this. The breakdown and all helps to throw a somber note on the film but I do think parts of that could have been skipped. The film just tries a little too hard to be super emotional by the end when the whole film was quick paced and energetic so it just didn’t transition very well.

Overall, Deepwater Horizon is a fun film. You may know what is going to happen but it doesn’t change the fact that the first half is really written well. They did a good job with it and you get to know the characters before things turn sideways. I enjoy seeing corporate duke it out with the small well meaning companies in all of these films. There’s just something about having confident villains that always makes for a lot of back and forth. With good banter at the ready, this is a film you would enjoy checking out.