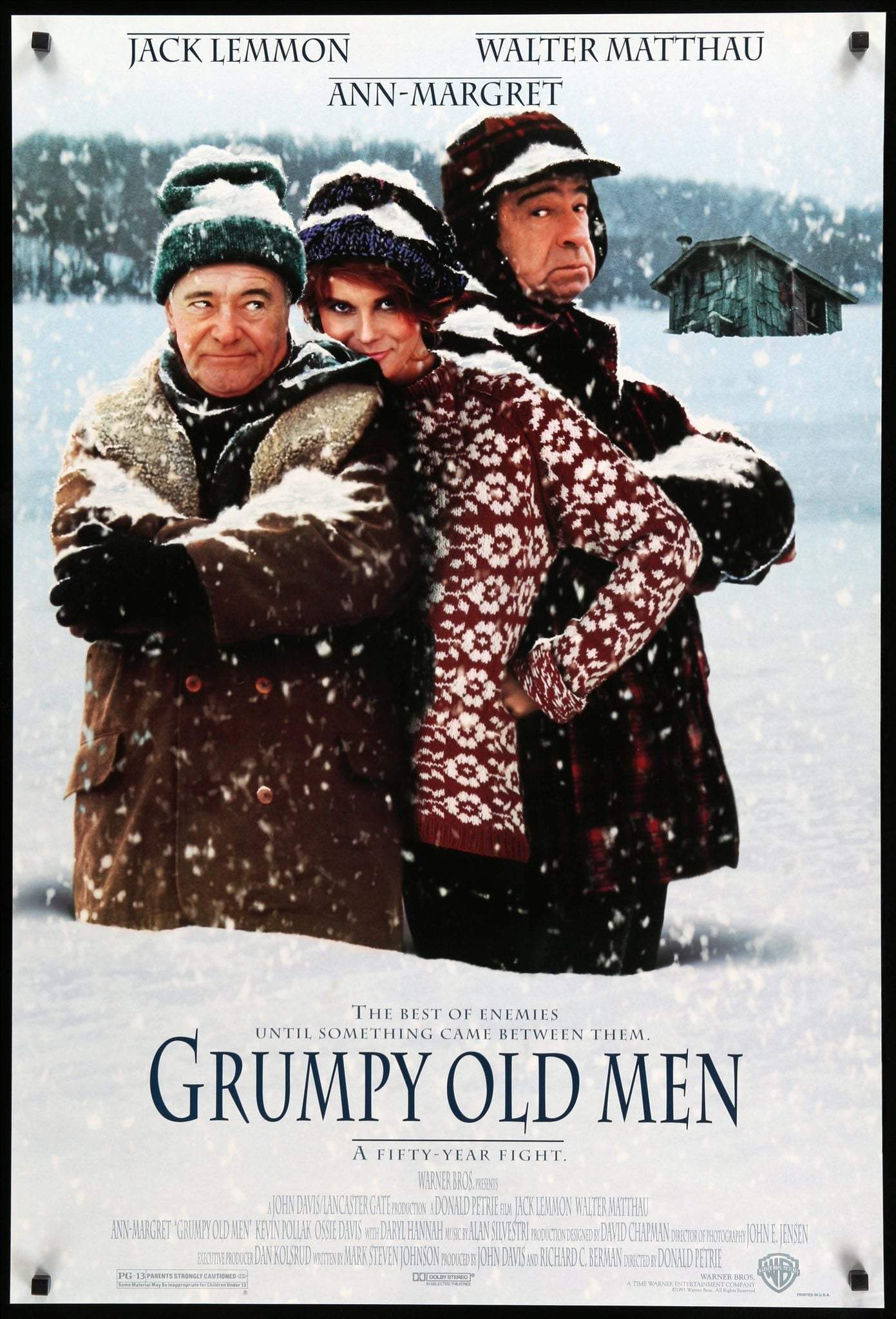 With a title like this you can immediately tell what the film’s going to be like and that’s a credit to the title. No misdirects here, the film is as advertised. I’d say it works well enough, I like the banter between the two characters and their never ending fights. The weakest part of the film is definitely the romantic angle though. We have the triangle with the main characters fighting over the new girl in town as well as a romance between their kids. Both romances really only serve to undercut the solid comedy.

The movie starts by introducing us to John and Max. Both of them are older in years and have remained single. John is close to defaulting on his house though as the IRS gets closer and closer every day. Still, how can you hope to dodge those guys forever right? Then Max just enjoys his day to day life with some fishing but out of nowhere they get a neighbor named Ariel. She seems to be quite the free spirit and in this dead neighborhood of senior citizens the characters are all excited. Mainly John and Max who each decide to claim her. Who will win this rivalry once and for all?

Lets start with the positives here. The rivalry between John and Max is fun. For the most part you don’t feel like they ever take things too far aside from one moment when Max nearly causes John to drown. For the most part their pranks are just to annoy each other and they tend to succeed at that. It’s kind of nice to think about two neighbors that have been fighting with each other for over 60 years. At the very least it gives them a constant in their life since every day they know they have to be ready to win. They’ll still have each other’s backs at times though.

From the two characters I would lean on Max being my favorite. He’s just a bit of a tougher character who doesn’t beat around the bush. He doesn’t back down easy and even gets the IRS guy at one point. For John, well he tries his best as well but you feel like Max usually wins both the verbal and physical fights. Max even moves quicker when it counts although ultimately you can see John being the nicer guy. He’ll be the bigger man and walk away from a fight much sooner than Max would.

As for Ariel, well it does feel like she is leading on both characters to an extent. Now she just likes having fun which is fair to say except I don’t think that accounts for some things like the snowmobile rides with Max right after John dumped her and just seemingly trying to make him jealous. That’s why you aren’t rooting for either character in the romance since in the end it doesn’t feel all that genuine. If Ariel went with Max it would feel like a rebound. Meanwhile John was willing to break up with her to make Max feel better which to me makes it feel like their romance was never all that strong. It’s a lose-lose situation. Ariel also feels a lot younger than the main two characters although it could easily just be that she takes much better care of herself.

Both guys also just look really bad in their pursuit of her. Right from the start all they can think of it getting with her. They barely seem to see her as a person and just purely as a trophy. That’s the way the rest of the town seems to feel as well aside from the town owner. That’s definitely not a credit to the town as a whole. Then you have the other romance which is even worse. Max’s kid Jacob likes Melanie, he has ever since second grade. She admits that she would mess with him by leaving the windows open which already seems petty but now that she is prepping for a divorce, Jacob knows its his time to be the quick rebound.

The issue is that the old guy (Forget his name) returns real quick and Melanie is willing to have him over immediately. So Jacob is left in the cold again but once the guy leaves, she is willing to be with Jacob. That’s almost the definition of a rebound. Jacob only got a chance because the other guy was getting drunk and was not dependable. Jacob shouldn’t feel too thrilled about that because now he will always know that he was not the first pick. He’s the second string player coming off the bench because the lead got injured. That’s not a good foundation for a proper romance and I always have my doubts about this working out.

So I didn’t care much for either romance plot. The romance is also a rather big part of the story so it’s hard to say that you should ignore it entirely as well. To do that would be to skip most of the film. That said, it definitely does lower the score by a point. Additionally while the writing can be fun for the banter and all, I wouldn’t say it’s always great. There are definitely enough lines that will make you shake your head that keep me from calling it a top tier title or anything like that either. It’s good enough to give you some smiles and keep the movie moving at a good pace. That’s enough for this to be a good movie, it feels like something is always happening here.

Overall, Grumpy Old Men is a film that is probably better than it would be if it was remade in the modern day. I’ve seen trailers for similar kinds of films that always look pretty bad. At the very least this one seems classy most of the time which is the important thing. It’s a rather light hearted film with some good characters and that’s really all you can ask for. If the premise sounds entertaining then I think you will like it. After all, a good deal of the film depends on how entertaining you find the banter to be between the two characters and fortunately that is the strongest part of the film. I will have the review of the sequel up fairly soon as well to compare if it is able to keep the same level of energy.