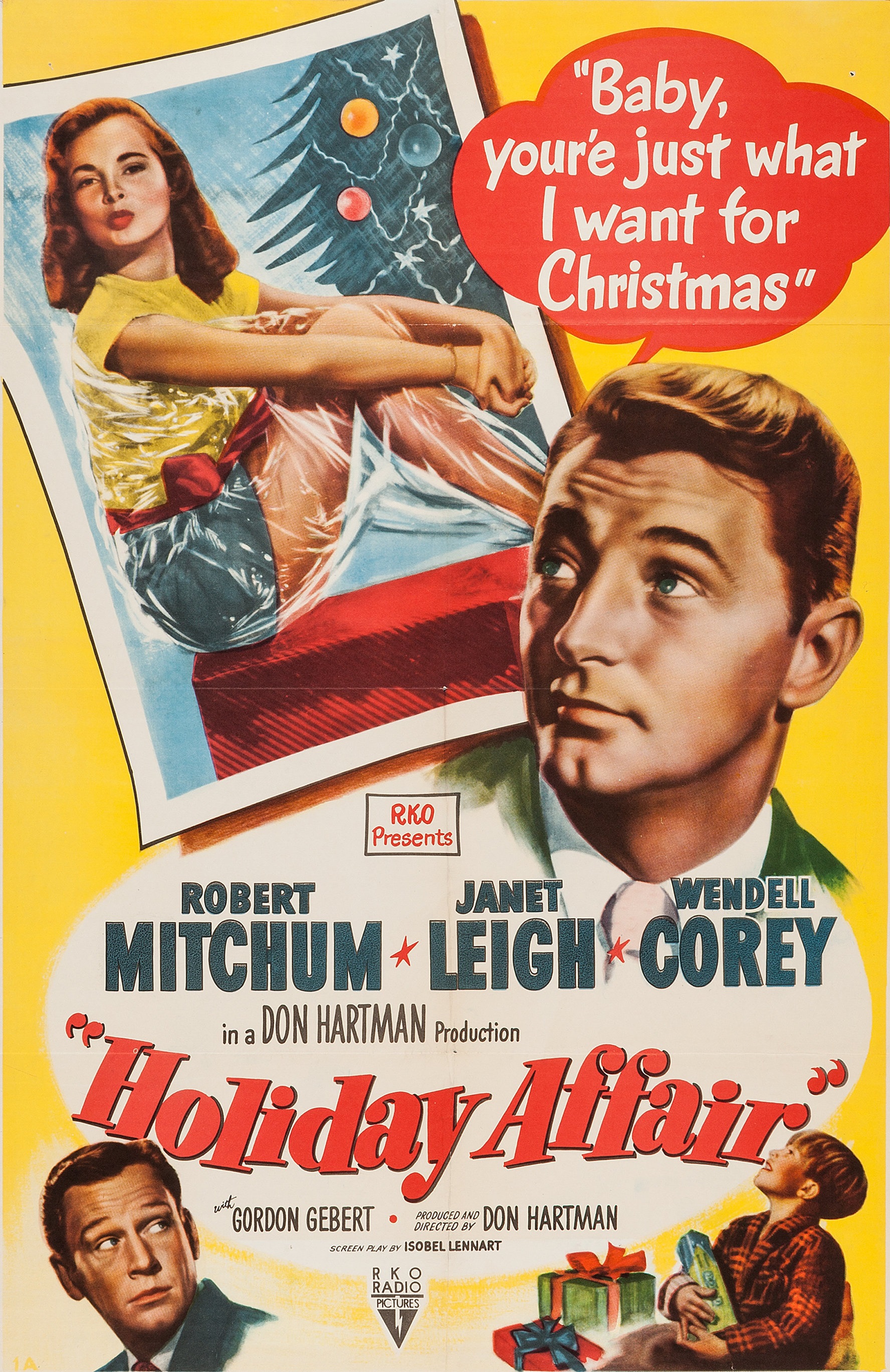 The Holiday Affair is a very classic Christmas kind of story. In fact, you would almost think it was a Hallmark movie if it wasn’t so old as it follows a lot of the same story beats. You have the first guy who you know is doomed from the start and then the next guy who will ultimately end up winning out. It’s good but the romance in this one is especially weak which ends up burning off a star.

The movie starts with Steve minding his own business at a department store where he works on selling trains and anything else that customers would need. Well a lady named Connie shows up to buy the train and it turns out that she is a secret shopper from the other rival stores who never had any intention of keeping it. Steve is supposed to report her but doesn’t so he is promptly fired. Connie lets him have a date as an apology (She has a boyfriend right now by the way) and so they go around town as he helps her with these deceptive tactics at every store. Once Steve has proven that he has no integrity here, the two are split up in the traffic where Connie goes home to find her son Timmy and then her boyfriend Carl shows up. Steve ends up barging in later on as he found out her address and now things are going to get complicated. Timmy much prefers Steve but Carl has been Connie’s friend for many years so she was going to reward him with a safe marriage and it would all be happy. Can she really toss this guy aside for someone she only just met a few hours ago?

Now that’s probably a particularly negative way of framing the romance but it was just really bad from start to finish. By the end of the film you’re left wondering if she even really loves either one of them. So for Carl he is the classic “Best Friend” who actually liked Connie the whole time. I mean, it seems like they knew each other for ages at least. I forget how long ago Connie’s first husband passed away but given Timmy’s age, it couldn’t have been too long. So I guess Carl was playing the long game here but it’s always a quick reason to root against him.

That said, it seems like Carl and Connie were basically together, it just wasn’t official since Connie didn’t want commitment. Usually it’s the other way around so that was a fun twist. Carl just doesn’t seem like he would work out though. A big part of this is how he doesn’t really get along with Timmy. I mean, he tries but it’s clear that Timmy isn’t on board with this arrangement and that could cause massive issues down the road.

The biggest issue here is that Connie just doesn’t seem to love Carl. There is no enthusiasm at all to when he proposes which is a huge red flag and she only starts to go through with it because she’s worried that she might like Steve. That’s an even bigger red flag. Carl could have done a better job of fighting for her but at the end of the day do you want to fight for someone if they really don’t want you? In a way Connie made her choice and at that point it was time for Carl to dash out of there.

In general Connie was way too indecisive. She was hanging out with both guys and didn’t see a problem with it. When Steve made a move on her in the kitchen, she should have thrown him out and ended things on bad terms. You really can’t let things like that slide unless he is the one. That was the moment where she just didn’t make a choice and it really hurt her character quite a bit. With her still grieving over the death of her first husband, maybe Connie shouldn’t even be looking for a rebound right now. It’s not like marriage was her idea at all, just both of the guys kept mentioning it. If she wasn’t ready then she should have just stuck to that and just raised Timmy on her own. It would probably set a better example too.

Finally, I have to knock Steve here as well. While I suppose it’s fair game to go after anyone as long as they aren’t married yet, it’s generally understood that you don’t try for someone who is already dating. They should be seen as off the market at that point as they have made their choice. It’s a lose-lose situation for you. If you are able to win them away from the person they are currently dating, what’s to stop someone else from doing the same thing once you are married? If you try but are unable to win over the girl, then you’ll just feel bad. Doesn’t matter how bad your romance radar is, if you keep falling for people who are taken you have to regroup and look for someone else. That’s the only way out of this.

Steve’s a nice guy but it does feel like he was also trying to win favor with Connie by getting Timmy a gift and always hanging around. Some instances like the courtroom were pure coincidence though so you can’t blame him there. I felt like the court officer was also needlessly antagonistic the whole time. The story wasn’t nearly as hard to swallow as the guy was making it out to be. Without a true witness either (The guy had to run on a train after accusing someone of theft….what? If he can’t stick around to identify the perp then I don’t see how you can pursue the case) they should have just let Steve go. Especially after some witnesses were there to vouch for his innocence. It’s clear that the guy just wanted to mess with the main characters.

And to be fair, they make this rather easy. As for Timmy, he is mainly here to make things tough on everyone. Trying to get the refund on the train was fine but leaving home for hours to do it was not since he made everyone worry about him a lot. He should have left a note or something. It would have meant that the heroes would find him and accompany the kid to the store but it still beats the alternative. Timmy really didn’t think this one through here. His grandparents were fun though, they don’t have much of a poker face but they are good with the reactions.

Overall, The Holiday Affair is a fun Christmas film. I liked the dynamic Steve and Connie had before they got together as he was quite the sharp seller. That said, the title is very appropriate for the film as the whole romance just feels like two different affairs. I don’t see the relationship being perfect long term and either way it just feels like a lot of rebounds here. I have to doubt Connie’s overall sincerity here and we don’t even know Steve all that well. Certainly not long enough to really know how well he’ll do in this role. This film may be older but the romance moves at quite the rapid pace and I just don’t think it works here. At least with all of the characters being so open about this, it’s nice to see Steve and Carl really get into it with passive aggressive comments. I won’t forget Steve’s speech at the dinner table anytime soon.