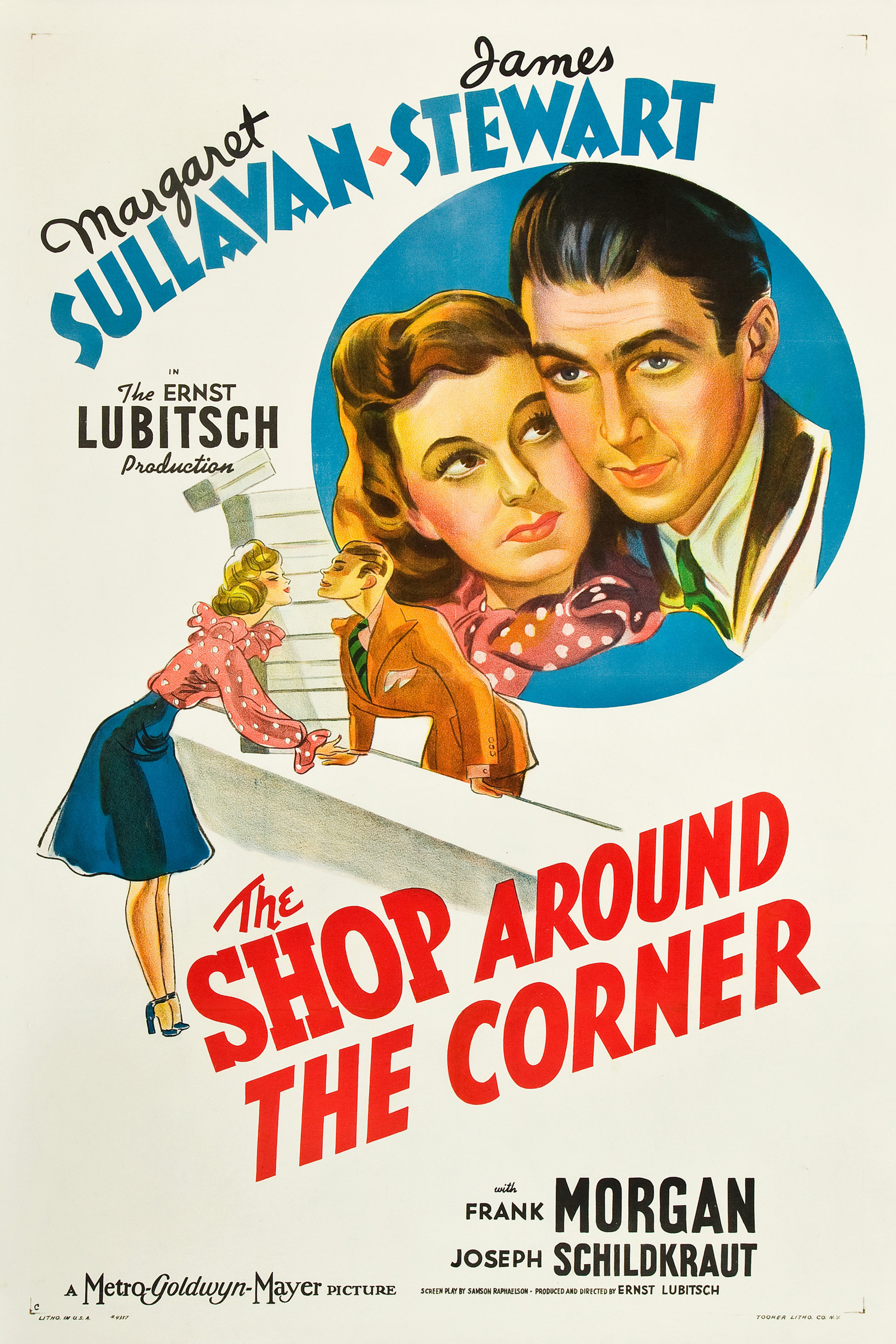 The Shop Around the Corner is a pretty fun title for a movie. It does give you a classic rom-com feeling although you could also see this working for a horror title. It’s a fun little story although it is one of those times where the romance seems is hard to buy into because of how mean the main heroine is though. If she’s this mean to just anyone…well the main guy better watch out.

The film starts off by introducing us to Alfred who is the best salesman in the store. This store sells just about everything from music boxes to suitcases. Alfred has been exchanging letters with a lady and is starting to get serious about her but they are anonymous pen pals so they don’t even know what each other looks like. In comes the main heroine Klara who really wants a job. She and Alfred do not get along right from the start but she ends up getting the job. Fast forward many months and things have not improved between them. Each of them are getting ready to meet their pen pal but Alfred is distracted by the fact that the boss: Hugo has been turning on him as of late. Is Alfred’s job security in trouble?

Alfred seems like a nice guy right from the start. While the 6 month feud between him and Klara is mainly off screen, it seems like she’s always the one who starts it. A lot of her remarks towards him seemed rather uncalled for the whole time. She insults his intelligence, his character, and is always just taking any shot she can get. Even when he is being nice or at least trying to be, she just tears him down more and more. So it was hard to find her likable throughout the movie. Klara is someone who is only nice to some people and that’s not a good thing. When you’re conditionally nice, that just means you’re probably someone to be avoided.

As for Alfred, well he is a good main character. He’s put up with a whole lot on the job but kept on going. He’s the most dependable employee in the whole place. Alfred also does really enjoy the letters he gets and responding to them. In a way his life was going perfectly well until Klara stops by and the boss starts acting rather aggressively towards him. Alfred’s life is thrown upside down but at no point does he take it out on any of the other characters. He just does his best to stay professional and really does all the right things. By the end you’ll certainly be rooting for him.

I did not like the boss Hugo. So, Hugo finds out that someone is having an affair with his wife and so he jumps to conclusions on who it is before waiting for his private investigator to let him know who it was. Not like the PI was a lot of help though as the guy just narrowed the options down to an employee which was most likely anyway. Hugo goes in hard on burning the bridge with Alfred. Alfred’s a nice guy and still stays courteous but I don’t think many would overlook how Hugo treated them.

Pirovitch is Alfred’s best friend and he’s a loyal sidekick to have at the ready. Whenever Alfred needed help with anything, Pirovitch would help out. The guy also took things in stride and had a very laidback approach to everything. Whatever you needed to be done, Pirovitch would do it. Then you have Vadas, one of the more dicey characters. He is quick to agree with the boss on anything to curry favor. He’s not trustworthy or honest in the slightest as he can only think about moving up. There’s always someone like that and so you need to keep on high alert around him.

Finally you have Pepi and this guy was really entertaining. Pepi started out as an errand boy and gradually moves up the chain. The voice he uses for the phone calls is great as he trolls Hugo’s wife and he also really knows how to command the troops once he moves up. Pepi has a lot of confidence in himself and this really ends up paying off for him. I like his confidence and his will to win. Through rain or sun, you could always count on Pepi to get the job done. You can also tell that he is going to be a very strict boss. There’s no doubt about that.

The writing is solid here with a lot of good banter between the characters. You’re always glad when Alfred defends himself so that it isn’t just a one way smackdown as Klara destroys him. Fortunately Alfred rarely takes the comments to heart and just lets them bounce away. I’m rarely surprised to see good writing in these old films because if anything I’ve come to expect it. This one doesn’t disappoint in that area and the whole film flies by pretty fast. Really the only weakness as I’ve mentioned is the romance which doesn’t really work.

The concept itself is sound. The idea of two characters liking each other as pen pals but not liking each other in the real world is a fun dynamic. It’s almost like a Clark Kent and Lois angle where she likes Superman but in most continuities doesn’t like Clark like that and will even insult him at times. I think the problem here is that they just made Klara too extreme. To balance this out, they should have also had Alfred taking more shots. Maybe tone down the actual shots so it’s more like fun colleague banter as opposed to extreme dislike. that’s really the only aspect where touching it up a bit would have been really good.

Overall, it’s not enough to really hurt the movie or anything like that though. Either way I had a good time with this one. When you have good writing and a very strong main character, you’re likely going to succeed either way. I like the story’s premise and the execution was on point. The movie never drags on at any point and the side characters are also very memorable. I wouldn’t have minded Pepi getting to appear more but ultimately he served his role well. It’s a very charismatic store and you can see why they have so many sales each year with such a talented team. I’ll even give Hugo some credit there since he tries to lure in customers as well. His main issue is that he’s already too well known so his tricks don’t seem to work very often at this point.

2 thoughts on “The Shop Around the Corner Review”