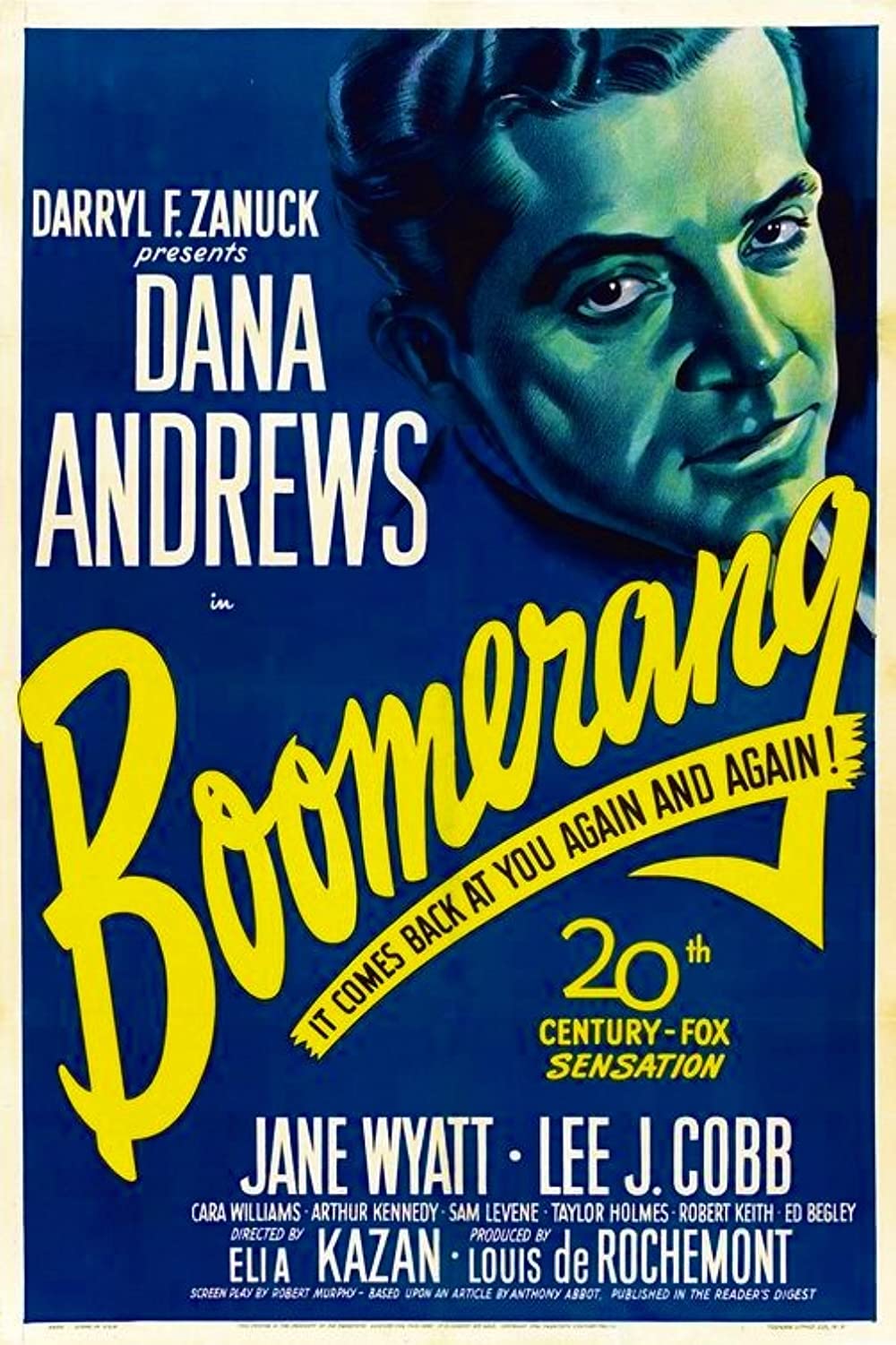 Boomerang! is a rather odd name for this film. It’s certainly not one of the first names that you would guess when thinking about this one. That said, the film definitely gets a solid thumbs up all the way. The court scenes are handled very well and the story is a good one. With quality writing and a solid story backing it up, you can tell that a lot of heart was put into this film.

The story starts with a priest/minister being murdered and the assailant runs off into the night. Unfortunately it was late and nobody got a good look at the guy. He’s now on the run and the police are being put under a lot of heat in order to find him. The local government is getting involved as well and so nobody is happy. The current administration is trying to stay in business and this could be game over for them. Meanwhile the other side is naturally thrilled since this could be their chance to be in charge. Henry is right in the thick of it as the prosecutor in the case. He is being pressured every which way but has to decide to look at the case fairly.

It’s a very compelling story here and of course when there’s a lot of pressure put on you like this, it can make every decision feel very tough. Henry knows that his career could be over depending on how he goes about this and he is even threatened at gunpoint to make a certain decision. So he can’t forget that all eyes are on him here. The fact that it will be very difficult to get any tangible evidence on whoever committed the crime is really what will make this a tough battle to get around.

Throughout the film we see how the hysteria gradually reaches everyone. It starts out with some of the townsfolk being upset and before long everyone is watching the news real closely. At one point they are even ready to beat up the police to attack the main suspect in case the court system was going to let them off. By this point they’re no better than a mob of course and to think before now the town had been completely peaceful. It all changed within the span of a day. That’s how big this current case was.

As the main character, Henry is great from start to finish. He really does try to examine all of the evidence himself to make sure that he is doing the right thing. He isn’t afraid to look really closely into some of the evidence even if it could hurt his case as the prosecutor. Henry really wants to do the right thing even if it’ll hurt him politically and keeps his cool even when a gun is pointed on him. It’s hard to find a lead that’s much better than he is, Henry always made the right decisions when it counted.

Robinson is the police chief and I liked him as well. He makes sure to do a very thorough interrogation of the suspect John to make sure that he really is the criminal. Robinson is one of the last people to really buy into this guy being the crook and that’s established as one of his personality traits. He doesn’t change his mind easily which is very helpful at the start of the film and less so by the end. There is definitely a lot of tension between him and Henry later on in the film since they have two different ideas about how this situation should go. Definitely a good character though and the kind of guy you want as the police chief.

Then you have John who is the big suspect here. I would certainly make the case that John didn’t handle the situation very well but it probably wouldn’t have matter much to an extent. There was just too much circumstantial evidence here for him to have gone. He was in the town at the right time to commit the murder and even had a gun that is linked with the bullet. All signs pointed to him being the guilty party so it was difficult for him to not appear guilty.

John seemed really upset right from the jump but getting dragged in on murder charges will do that to you. Someone even comes in to give false testimony and mess him up just as a grudge which makes him even more upset. I feel like the lady was let off easy for completely showing up with a false statement to try and get rid of John but at least they warned her. John signing the document also made sense because after a few days of this kind of interrogation is seems likely that almost anyone would crack.

I tend to love court scenes so with a big part of this film taking place there, I knew this was going to be good. Henry does a great job of breaking down the case point by point in a way that’s easy to follow and that can get the jury on his side. He really dismantles every point that he tackles in a very systematic way. He was ready for some of the witnesses to give him a hard time and with ways to debunk everything. Some of these counters involved a lot of lengthy tests from before the trial which shows that he did his homework.

Henry was taking this case very seriously and it’s a flattering look at the justice system. It may not always work out but this town can certainly breathe easy when you have guys like Henry on the job. The corruption didn’t win this time as the politicians try messing around but they couldn’t break Henry. In part this is also thanks to one of the reporters who was around named Dave. This guy always knew when a story would strike and had quicker reaction times than the others. So he was the first to leave the room and the first to enter it. He’s also responsible for a lot of the snappy dialogue in the film which is always a blast. The banter here was top notch!

Overall, Boomerang! is a great film on all accounts. The writing and story are strong and the characters are just as solid to match that. The movie does a great job of showing how everyone just really wanted someone to pin the blame on regardless of how good the evidence was. A crowd can certainly be stirred up into a frenzy very quickly and that’s exactly what happened here. It was great to see the town get so engaged with what was going on but of course the obvious downside is how extreme they take this. The townsfolk sometimes end up being more of a hinderance than a help with how they try to get everyone arrested.