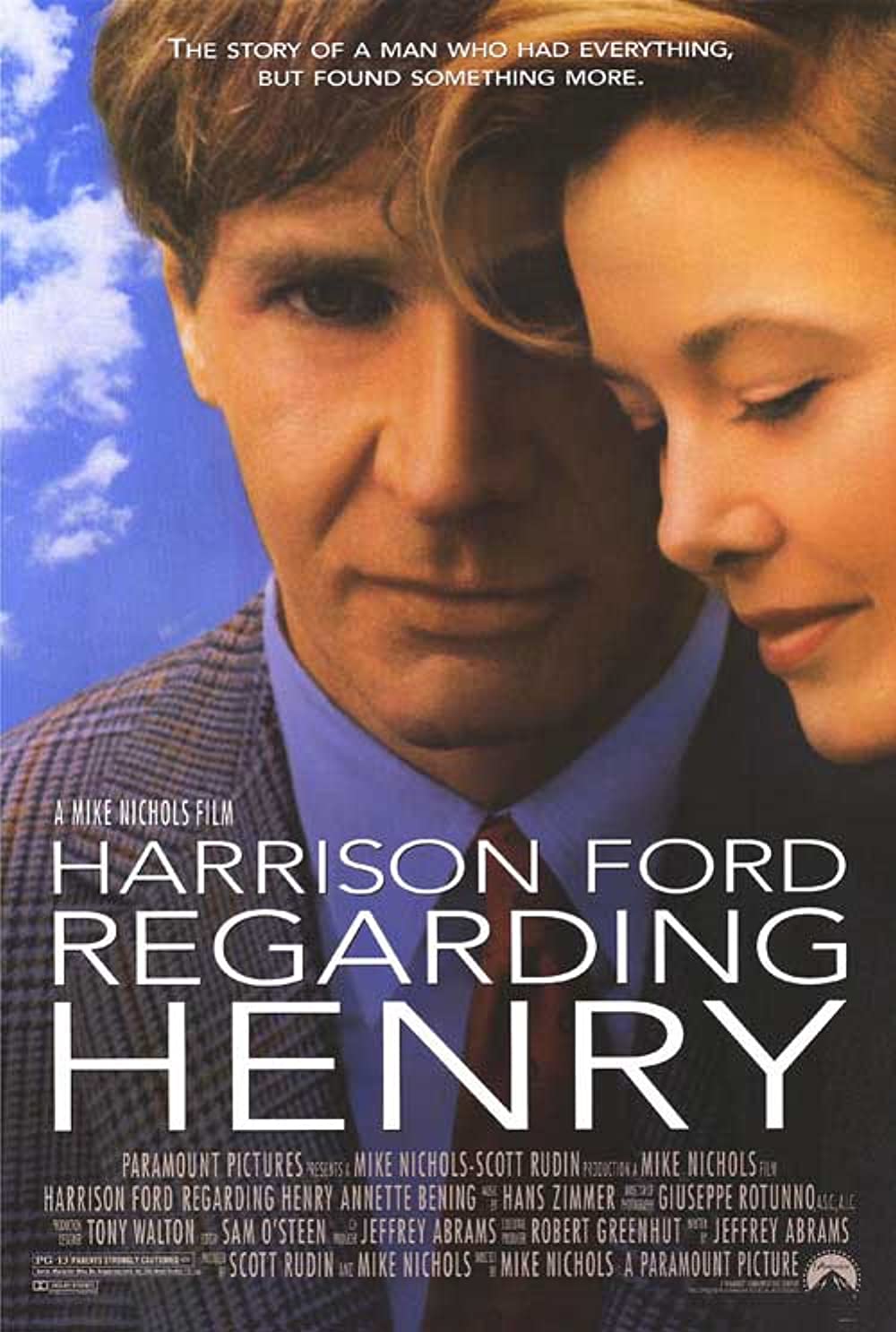 Regarding Henry is one of those amnesia films where you can’t help but wish that we could have seen more of him from before the injury. I liked his confidence and it seems like he was doing quite well for himself. After the injury he really has to change and come to terms with his life and how he can turn things around. The movie is suitably emotional but one that has a few too many twists within it that end up hurting the film as a whole.

The movie starts with Henry dominating in the court room as per usual. He is able to help defeat one guy who was suing the hospital because the guy couldn’t find the proof. Henry uses every tactic in the book including an emotional appeal and wins without a hitch. His life seems perfect even if his kid Rachel isn’t great with boundaries yet and seemingly broke something again. His family relationships aren’t great but at least he’s rich. Well, things take a turn for the worse when he walks into a store and gets shot by someone during a hold-up. He has now lost his memories and can barely function to the point where he will have to learn how to walk again. Will he be able to do this and can he be close to his family again?

It always seems to be tough to be rich and be a family man in these films. It’s only once the guy gets amnesia and is stuck home for a while that he is able to reconnect with everyone. That’s certainly the case with Henry here at least. Well, it’s always a good message to reconnect with family but I do wish that he would end up getting his confidence back. Even by the end of the film it doesn’t seem like he will be as confident as he used to be which is a shame. He’s a lot more timid now. Of course Henry is also a much better person so the change is worth it. Maybe he’ll develop that confidence again later on.

The movie really has two halves which is the recuperation period at the hospital and then getting back into his normal life again. The first half goes by pretty quickly and he has a really great therapist in Bradley. I’m not sure what Bradley’s official title is but he makes that that Henry is rehabilitating well and that everything proceeds without issue. Bradley was there for Henry during the tough times and gave good advice throughout. He’s definitely the kind of guy you want to have taking care of you since he puts his heart into it and it’s not just a job.

In the second half is where you have more of the drama. Sarah is having a particularly tough time of things with trying to keep them from losing their house or going bankrupt. She’s a bit stressed out about everything and Rachel has her school she is supposed to be heading off for and isn’t exactly thrilled about that. I’d say the second half is where the the film starts to show its flaws. It just has 1-2 too many plot twists by the end which severely hurt the characters. It adds a little more drama but I’d say these scenes just should have never happened.

First we can talk about Henry. Like I said, his original version is definitely a jerk and not someone who’s very nice to be around. Well okay, that’s pretty common but at least it’s not awful right? Well, we find out that he was also cheating on Sarah and that’s when things went a bit too far for Henry. You can’t root for him after that and it makes him a complete sleazeball. It reminds me of when Tohma got amnesia in Index and thought his old self was a jerk due to some miscommunications. Well, in Henry’s case he really is that bad and it’s a bad look for him.

Then we’ve also got Sarah who has been doing some cheating as well. Now both characters are completely morally compromised so that none of them are likable. The film should have left well enough alone and they could have been a good pair of characters. Now it’s just too tough to go back and root for them. The film should have avoided the extra drama here. Rachel’s okay at best and since she’s a kid it’s not like you have to worry about much of anything with drama for her but she wasn’t always the nicest character so I wouldn’t say that I liked her much either.

All in all that means there weren’t very many characters that I did like here. Henry’s best friend at work is the guy who Sarah was cheating on him with so that makes that guy a complete phony. The only other reasonable character beyond Bradley would be Henry’s boss. The film kept hinting that this guy couldn’t be trusted but he actually seemed rather decent the whole time. At the very least he did keep Henry employed even when the guy couldn’t really help much at all. The boss is corrupt but apparently everyone in the business was.

I do question how Henry would be brought back into his old position so quickly though. After the amnesia there is no way he could have possibly performed any of the work at the job. Especially not a position where you’re reading through law and have to make snap decisions. I think it would have made more sense if Henry was brought back on paid sick leave or something so he was still at home. Of course it’s nice that he was brought back in right away but he could barely even talk at that point in time. So it just didn’t make a whole lot of sense to me.

The most memorable scene in the film has to be the moment when Henry is shot though. He walks into the store while it’s being robbed and I would say Henry made a lot of the right moves at first. He was calm and tried to act normal but his big mistake was insisting on finishing his purchase instead of just walking out. Leaving is absolutely what he should have done instead of pleading his case. Seriously if a guy with a gun tells you to leave your best bet is to do just that and then you can call the cops or hide behind the door and jump him as he leaves. Either way, there’s not much benefit to trying to debate with the criminal at that point. There’s no way he’s going to listen to you, especially while he’s amped up like this.

Overall, Regarding Henry is an emotional title but I really think the film should have kept Henry and Sarah as being more likable characters. Having them both be compromised by really bad decisions which will impact their lives forever was not a good idea. At least Henry doesn’t remember this happening so it’ll feel like a different person, but Sarah always will. It just feels like this moment had no real point in the story except to add a little more drama that is wrapped up very quickly as it is. The romance wasn’t very good here already and this didn’t help. You can do better if you’re looking for an emotional kind of experience but all in all the ending is fairly happy so you won’t end off on a low note.

2 thoughts on “Regarding Henry Review”