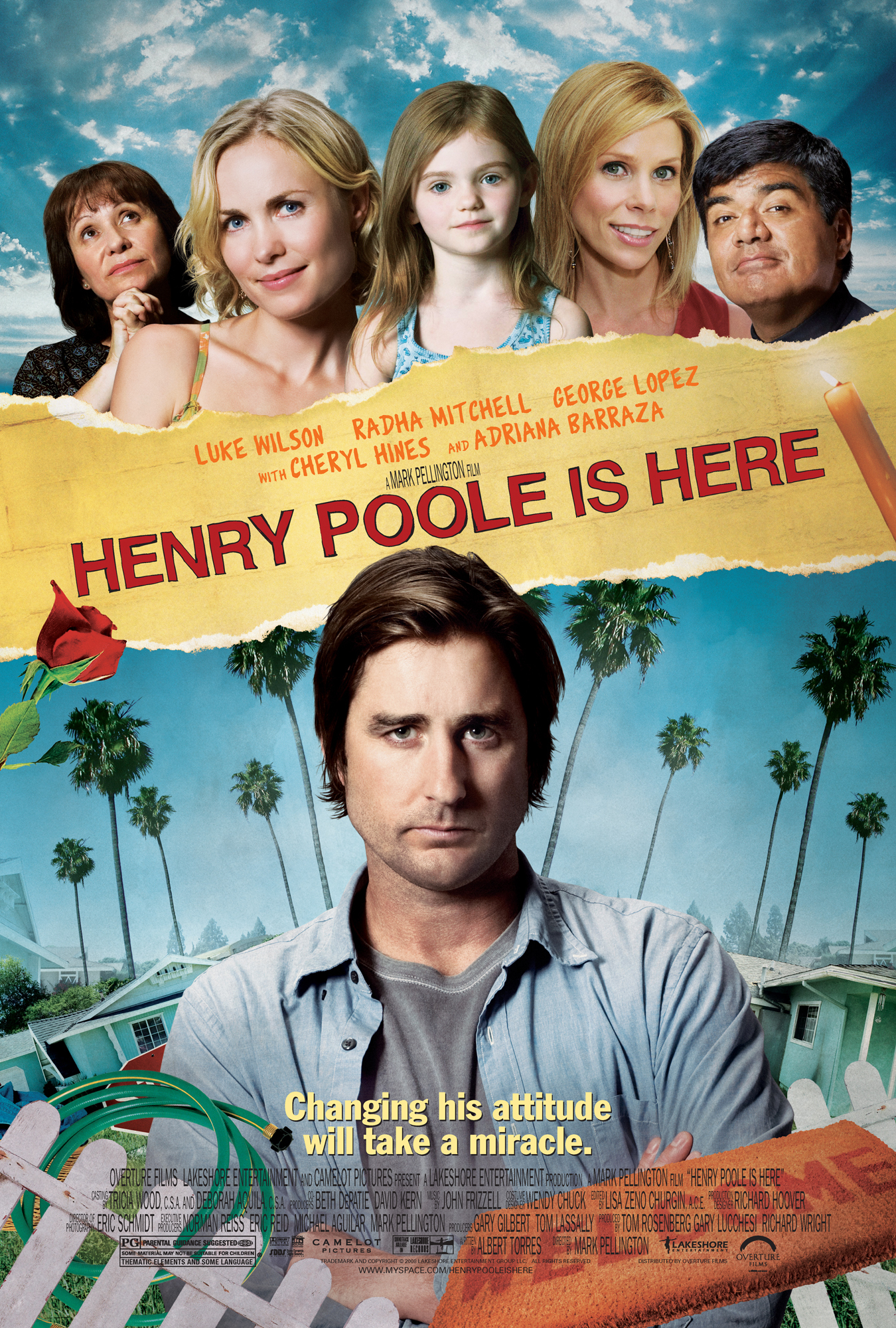 Henry Poole makes for a very unique film and it’ll take you on a fun journey. I found Henry himself to be super unreasonable for most of it but the rest of the characters were solid enough. It’s a good drama film in the end even if it can be a bit long at times.

The movie starts with Henry moving into a new house. It’s a rather beat up old place and he considerably overpaid for it but he doesn’t seem to care. His real estate agent even offers to knock down the price but he declines. He then meets his neighbors and everyone seems reasonable enough, if not a little over friendly. One day a water stain appears by his wall outside though and the neighbor Esperanza declares that it is the Face of God. Henry is incredibly doubtful of this since it just looks like a normal water stain but pretty soon she is inviting lots of people from her Church to check it out. Henry sees how his house is quickly becoming a public attraction and he wants to stop it, but doesn’t really know how to do so. Also, why is he so uncaring about everything?

The film answers that question soon enough although you can probably guess it fairly early in the film. I can say that I can see why he’s not sweating the small stuff anymore and isn’t even trying to have much in the way of conversation. In his situation he may as well just do his thing and not worry about the rest. He has a lot of snacks, pizza, and the works. I’d say I would probably do something similar. No reason to break off human contact but I would definitely be getting a lot of pizza and snacks. At that point you may was well, there’s no reason not too.

I also don’t blame him for doubting the stain initially. After all, the whole thing did seem bonkers so I probably wouldn’t even humor everyone by touching it. As mysterious miracles start to happen to people though, I would certainly have given it a shot. It’s not like you have to do anything crazy either, just reach out and grab it. I think there’s a line between being healthily skeptical and being unreasonably so. Henry crossed that point after the lady with glasses tried the wall.

See, there’s a super market cashier named Patience who has really poor eyesight and needs thick glasses in order to see. So one day she touches the wall and she can see now. I don’ blame him for being skeptical of the congregation since they could just be lying but it’s clear that Patience was being honest there. At that point you really don’t have anything to lose.

He also takes things really far in the other direction like when he starts to yell at the crowd or beat up on his house. At the very least if you’re not going to buy into it then you have to be careful not to panic. The whole group breaking into his own every time does sound invasive so he should be pushing back there. Keep on building gates or something but wrecking your own house probably wasn’t the play.

Instead of trying to cover the stain with paint I would have just put a poster or a picture over it though. I feel like that would have worked a whole lot better and I don’t think the group would be as active about removing it. If they tried you could always nail it down the next time. All I’m saying is Henry had a lot of other options but I felt like he gave up rather early on.

As for Esperanza, while she meant well you do think she could have respected boundaries a bit more. She was always sneaking around and the fact that she had to “sneak” means that she knew she was doing something wrong. You would think that would be going against her faith since that’s something Henry didn’t want her to do. So in a way she’s not being quite as virtuous and honest as you would be expecting. Then you have the whole congregation getting in on this too so I guess they were all cool with this? I get that it was a big deal that doesn’t happen very often but I still don’t think that’s an excuse for breaking and entering.

The film does a good job with the humor and a lot of this is meant to be in good fun but of course you still have to think about it. It’s pretty fun to see Henry avoiding contact with everyone the whole time. The supermarket discussion with Patience for example definitely feels very one sided as she tries to make a friend. I can’t say I that I do much talking while at the check out line myself though. Definitely not really my speed. Patience means well though and is a solid character.

Then we get to the next door neighbor Dawn and her daughter Millie. Millie doesn’t talk anymore after a traumatic event from her past so now she just walks around and records people. Naturally this may be another case for the wall as well. Dawn and Millie are probably the only two characters that Henry is nice to from the start. Millie has a rough time of things but gets better as the film goes on. As for Dawn, she’s definitely very compassionate and does her best to welcome Henry into the neighborhood as well.

I would say Esperanza was best at this by bringing her empanadas over and everything. She really tried hard even when Henry was rather rude the whole time. Now the film does have a romance going with Henry and Dawn that I don’t think needed to be here. At one point Henry wonders if it’s selfish of him to be starting a relationship now and of course my answer would be an absolute yes. Look, you know the score here if you’re Henry and this is really something that will mainly help himself. I don’t see any way that this would be good for Dawn. This just puts her in a rough spot.

Now if Henry was in a different situation then fine, shoot your shot and try to have a good relationship. I don’t think this was the right time and place though. The romance is also a rather quick one and ultimately doesn’t change a whole lot in the film so I think it could have been skipped and wouldn’t have really created any issues. In the end you certainly won’t forget this film though. It’s a rather low key title through and through but the premise is just so unique that it works.

The movie portrays the wall as the real deal here but I’m definitely glad that it likely wouldn’t work out that way in real life. God can of course create miracles like this, but I don’t like the idea of applying it to a specific place or object. Some religions differ on this but in Christianity, we know that you can pray at any point, anywhere and God will hear you. You don’t need any intermediaries or anything like that to get the message across. The idea of the miracles only happening when you place your hand on the wall does introduce an intermediary though.

It would quickly become easy to start worshipping the wall if such a thing were to happen. That would become an idol of sorts and sure enough, people were leaving offerings under the wall. Of course it is meant to be left for God in this instance but I just don’t like the idea of this all being limited to one spot. Of course it can happen but this is why I don’t think it ever would. When God performs a miracle, it will be at a time and place we cannot guess. Not a specific location each time. Miracles happen every day too and we just can’t ever notice/know all of them.

Which if you don’t know the plot of the movie before watching, it’s fun to follow the scenes along and try to guess what genre this even is. At first when Henry kept on hearing flashbacks in his head, I figured he had some kind of supernatural power which is why he kept to himself. Like he is forced to keep on living all of his old experiences. Then I thought this was going to turn into some cult type film with Esperanza and her gang heading in. It takes a while to really know what kind of film this is.

You never think it’ll suddenly turn super dark or anything though. The film has a lot of solid comedic moments from the start so it doesn’t have a sinister flavor. I’d still say that the film was quite fun even through to the end. Some of the jokes can end up feeling more painful than funny like the nurse messing up on the shots a lot but the script was solid for each of those moments. A lot of the scenes are quietly funny too so it never feels like the film is really trying to make you laugh. It’s just witty and easy to follow along with.

As a final note, the film had a pretty solid soundtrack. There were quite a lot of songs in the movie and I thought they fit the tone rather well. The beat was very catchy and while I didn’t always catch a lot of the lyrics, they all seemed to represent Henry’s state of mind in the scene that he was in. I haven’t seen this many songs in a movie for quite some time and it was executed quite well here.

Overall, Henry Poole Is Here is a solid movie with some pretty good themes. The movie can be a bit long but ultimately it gets to accomplish quite a lot in that period of time. Henry is put in a tough situation so you can understand why he is so upset even if you don’t always agree with it. Of course it’s easy to say that you would handle the situation differently but it’s hard to say until it happens to you. Knowing that you will be safe after death plays a big role in being okay in this kind of situation though. Personally I would just try to maximize my enjoyment in the last days and have lots of junk food and pizza while trying not to think about it too hard. That’s only if I had definite knowledge of what was going to happen though. Most likely I wouldn’t be too convinced and would mostly still be living in a normal way, albeit with maybe a few more goodies than usual. Definitely check this out if you want to watch a more off beat kind of film.