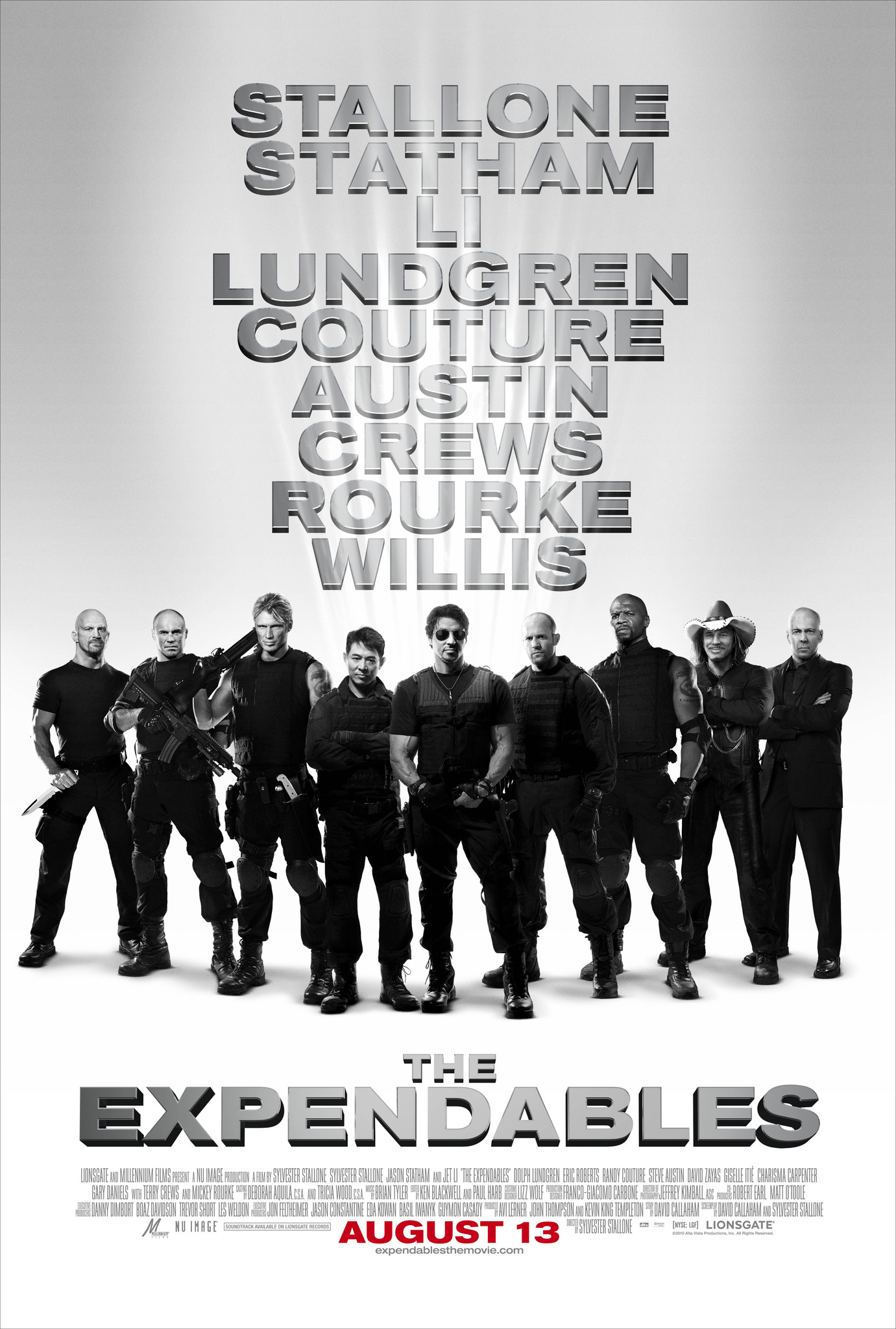 This is definitely a film that you had to have seen around a lot back in the day. It got quite a bit of promotion because of how many big names it was grabbing. The concept was always solid as well with all the action going on. Well, the film lives up to the hype pretty well for the most part although if you’re watching some specific characters then you won’t be in luck here.

The movie starts with Barney’s squad of Expendables saving some hostages and destroying the terrorists. One of their members (Gunner) goes too far with this though and Barney is forced to take him off the team. He then receives a new mission for the team by the mysterious Mr. Church. The group has to head to Viena where there is a lot of strife going on right now. The people are suffering as a group of rogue American forces have conspired with the King to take the place over. The heroes have to take out General Garza which should effectively stop this movement in its tracks. If they do that they things can finally go back to normal. This is an extremely difficult mission though where the heroes will be heavily outnumbered. Can their band really take out a whole army?

The film starts off with a lot of action right off the gate which is good. I also liked how for once the heroes didn’t just drop their guns when the villains took a hostage. I’ve mentioned in the past how this is always a bad idea and the characters here seemed to know it. In general the Expendables are very reluctant to drop their guns which is good. If you do that then the villains can just take out the hostage and your group at the same time. We also got the “traitor” fairly early on with Gunner. Cracking immediately was not a good look for him although apparently it just tends to happen to guys who are in the field for too long.

We get the best scene in the film very early on though as Barney gets his assignment from Church and then Trench shows up. Both Church and Trench don’t really do anything for the rest of the film which is unfortunate but it was such a fun scene to have the 3 of them in the same room like that. The banter and hype levels in that scene where through the roof. It was only one scene but you could already see a solid dynamic between the characters.

That’s really one of the biggest strengths of the film. The characters all have big egos and are top notch in their respective fields. Only the best of the best can be Expendables and if you are in a position where you’re a rival or working for Church then you’re at that level too. So there’s a lot of tough talk throughout the film and it works well. The banter here is very strong and the writing is definitely on point. I don’t think the film would be nearly as good without that. Even the villains talk tough to each other the whole time. In this movie, everyone can talk tough and everyone can fight hard which makes for a good balance.

Then of course there is a lot of action throughout the movie as well. The gun fights don’t hold back and we also get a lot of close combat battles as well. The film never really runs out of explosions and fighting. The highlight fight would probably be Yin taking on Gunner since that felt like a real boss fight. Of course seeing the heroes beating up on the random minions is cool too and all but it’s always nice when you have a villain who can really fight back as well. The characters all have different fighting styles too which works out well so it’s not all the same kind of action scene throughout.

The movie has some decent themes as well. They may not be super memorable or anything but they work well enough with the scenes. Expendables is a film that moves fairly quick so you’ll be at the end of the film in no time. There isn’t a whole lot of down time between action scenes either. So as long as you’re enjoying the hype of all these characters looking so good then you’re definitely going to have a blast here.

While the movie is very intense, I would say a lot of the action is very stylized so it’s not too bad. It’s much more like John Wick than Halloween for example. So most of the scenes are over quick and I wouldn’t say they dwell on the violent scenes. The only scene that was a bit much is when Sandra is tortured by the villains through waterboarding. I definitely could have done without that as that’s always the kind of grit I’d rather the film just skips. We know these guys are villains and don’t really need to go any further than that. It hurts the film’s momentum a bit there.

That’s really the only issue I had with the film though. Beyond that you’ve got a fun cast and lots of action which is always a good combo. Barney works well as the main character and clearly has a lot of experience here. Without him getting the group set they probably would have been in for a rough time. You also get the impression that he is the glue that keeps the team together. He’s always got a quick comment ready to defuse any situation as needed. That’s not something that just anyone could do.

Christmas is a solid right hand man as well. I like his confidence and he may be the only character who surpasses Barney in that aspect. Christmas really isn’t afraid to get his hands dirty and may be the best close quarters fighter in the group aside from Yin. You can always count on Christmas to get in there and get the job done. He also has the best working relationship with Barney and their banter is a lot of fun.

Now, if you are a fan of the Expendables as a team then you may be disappointed that quite a few of their members don’t do much. Aside from the main two who spend most of the film without the rest of the group, the only ones to do much of anything are Gunner and Yin. The rest are saved until the climax where they help out but the film is nearly over by then. For Yin, he’s a solid fighter but I was surprised that he wasn’t a bit stronger.

The whole time you figure that he is absolutely going to crush his opponent and instead he’s on the losing side. Perhaps that’s not so bad but as his first big fight you just expected him to do better. I suppose martial arts aren’t as handy when you’re fighting someone who is already an expert fighter in their own right but I still thought it would go down a bit differently.

As for Gunner, well I definitely didn’t like him. The guy completely cracked and the first thing he thinks to do is to join the other side? Nah, I don’t want someone like that on my side. That means you can absolutely never trust him again and so that really means that he’s an absolute liability. Once you go traitor you don’t really go back so easily.

As for the heroine Sandra, well she gets a lot of credit for being so tough under pressure. Ultimately she never betrays her ideals and also stays home until the very end. It may have been wise to leave but now she can proudly tell her people that she was here from start to finish. It was definitely not an easy journey either. The villains really gave her a tough time here. As for the villains themselves, well Garza got better by the end but he’s really not smart at all. The scene where he starts to give a big speech while surrounded by the other villains was a really horrible idea and you can immediately tell how that’s going to go.

As for Monroe, well he’s your classic villain leader who just wants a lot of power. Not much to say about him and I can’t say that I liked the guy at all. Posturing is all good and well to an extent but beyond that you need more of a big plan to stay in power. Even if things didn’t go great for the Expendables he still would have been doomed down the line.

Oh yeah there’s also a small romance subplot where Christmas finds out that his girlfriend is cheating on him. It feels like an extremely random subplot to be sure and that should have definitely ended the romance right away. There wasn’t much of a good excuse either. In their line of work the Expendables probably shouldn’t start a romance anyway since it might end badly though. At that point you should probably just fly solo because it’s such a dangerous profession.

Overall, The first Expendables film is pretty fun. It’s nice to get the nonstop action here as the heroes all show their stuff. I look forward to Church and Trench getting bigger roles next time though. They had the best scene here so imagine what they can do with some real screen time? The rest of the Expendables squad needs to get more action next time too though because you could really say that over half of this film is just the Barney and Christmas show. The others really got the shaft for the vast majority of the film.