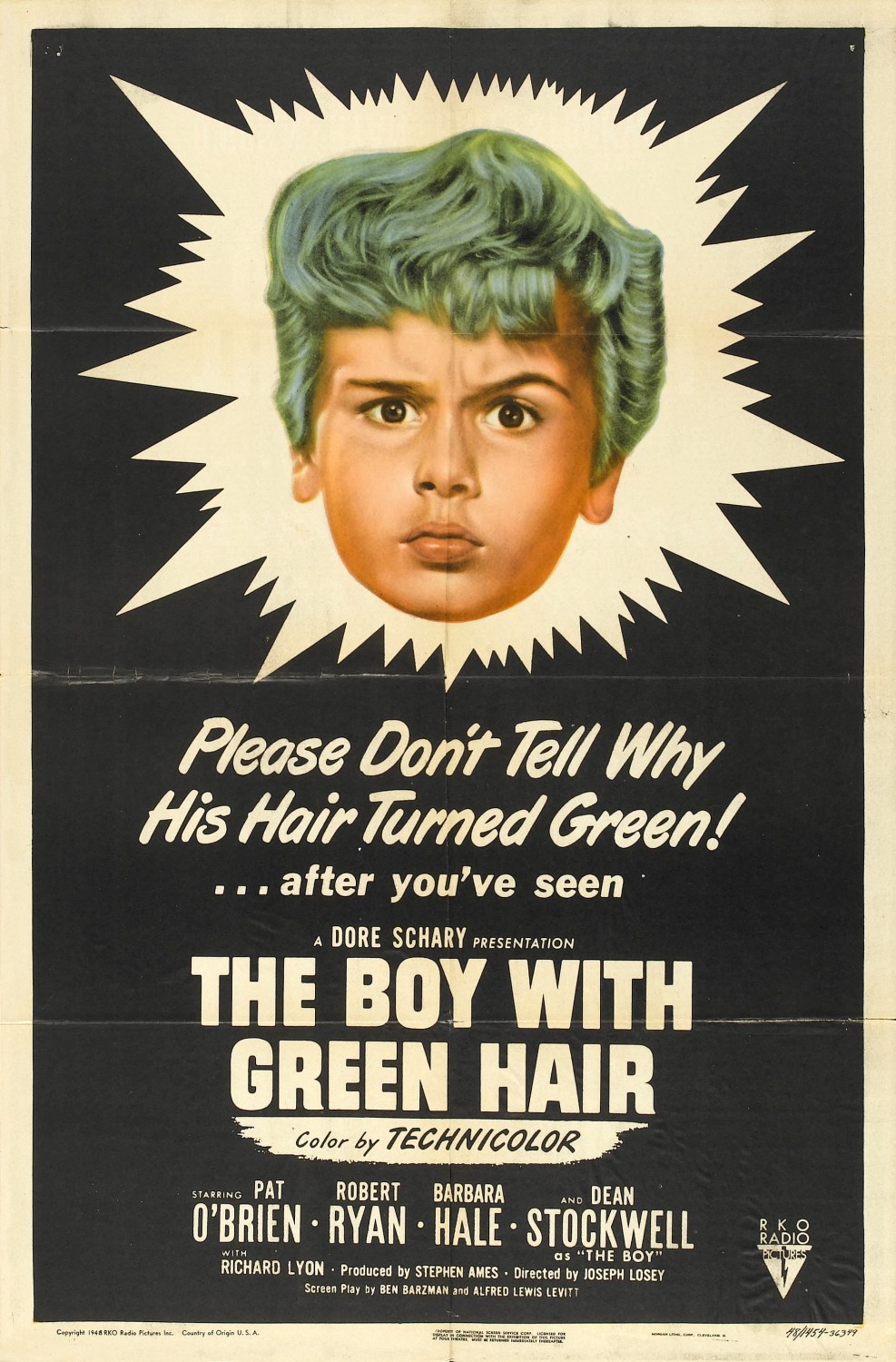 Green hair may not sound like a big deal to you but in this film it is a very grave matter that causes the whole town to go crazy. The film sometimes takes itself a little too seriously here. The main character could have been better too but ultimately it’s a nice enough film that you should have fun with. In the end the main message here is that you have to watch out for peer pressure.

The movie starts with a kid being found by the police in a rather distressed state. He is completely bald and can’t seem to talk at all. They send in for Dr. Evans to see what’s up here. Evans is good with people in general and figures out how to get Peter to talk a bit. Evans does this by using an ice cream and some food he had ready for dinner. Peter begins to tell him a story about what happened here which takes up the rest of the film. See, Peter is an orphan whose parents died in the war. Peter was bounced around from home to home until he finally got to stay with Gramps.

Gramps is a very nice man who did his best to cheer Peter up. His only mistake here was that he didn’t have the heart to tell Peter that he was an orphan. Peter goes through school rather normally but people are still talking about war and he’s concerned. One day he wakes up with green hair and even meets a bunch of orphans in the woods. They tell him that he must stop the wars and Peter is unsure of what to do. The whole town is after him to get rid of the green hair and Peter isn’t sure of whether he can even get the message out to end the wars.

Now this plot takes you rather deep into the movie but I felt like I had to include the green hair part since it’s in the title. Surprisingly the green hair doesn’t come in until we’re almost halfway through the film though. A lot of the film is really Peter getting used to daily life and helping out Gramps. I wouldn’t say Peter is overly spoiled or anything but he hasn’t exactly had a stable living environment in a long time so you can certainly see why it is difficult for him to even get used to normal activities. He’s not exactly a happy camper but that’s where Gramps comes in.

Gramps has to be the standout character here because every scene is really him trying to make life happier for Peter. Gramps is absolutely an optimist and even has some fun stories. Early on we get a story involving Gramps being invited to the castle and shenanigans ensue. I thought for a minute there that the film was going to be filled with these skits of imaginary events but this was the only one. An odd way to start with the song and all though.

Then the film gets a little more serious once the green hair plot starts but almost to an extent where it feels out of place. At first nobody even notices the green hair and I thought this was intentional as the plot would be that it’s a big deal to Peter but nobody else cares. Well, it was just a delayed reaction because then everyone notices and starts panicking left and right. Who’d have thought that the green hair would be such a big deal right?

It all feels like a big overreaction. Chasing Peter around may make sense for the kids since they’ll do anything but once the adults also start weighing in on how Peter should shave his hair off and all, you find that a bit hard to believe. In large part this is because Peter was running around telling everyone to stop fighting wars and all..but he’s just a little kid. I wouldn’t even say he was being too aggressive about this. He wasn’t doing any protesting or yelling, the kid was just running around town talking to everyone. Usually the adults would probably just assume that he would get bored after a while and stop. So the reactions here didn’t make a whole lot of sense.

Then there’s the scene with the kids in the woods. Personally I’m assuming that they’re all ghosts although I forget if the film makes that explicit. Otherwise..a bunch of orphans are just hiding out in the woods? I dunno if I can buy that one. Of course they tell Peter that he has to use his green hair as a symbol to change the adult’s minds and bring about peace which is great and all, but again you don’t feel like having green hair is going to have such a big impact.

The scenes with the kids are both so somber too. It doesn’t really match with the rest of the film which I would still consider to be rather lighthearted. By the time we get back to the present, I also don’t feel like this should have traumatized Peter nearly as much as it did. It was all a bad experience of course but to be so silent and distressed, I just thought things would be worse. Fortunately Evans did well so the characters still have a happy ending.

Evans also deserves a lot of credit here. His role is rather small but he does come through when it counts. Without him Peter would still be completely depressed. Evans also gave it to Peter plainly at the end. He didn’t pretend to believe the fantastic story or anything and just told him that he didn’t believe it. Evans still gave him a pep talk and made everything work out though. The police called up the right man for the job here.

Overall, The Boy With Green Hair is a decently good film. I think it could have been a little bit better if the whole green hair part was handled a little differently. The reactions are just all too extreme and it also takes a while for the green hair to kick in. I don’t think Peter should have cared about how his hair looked as much or the rest of the town to be honest. If they’re so nervous of the anti war message that a kid can take them down, then they really ought to prepare more or just switch sides. If the main character had been adult then these plots may have worked better like the job having a no green hair policy or something and that would be the dilemma about spreading the message. If you’re up for a decent slice of life adventure though then you should check this one out.