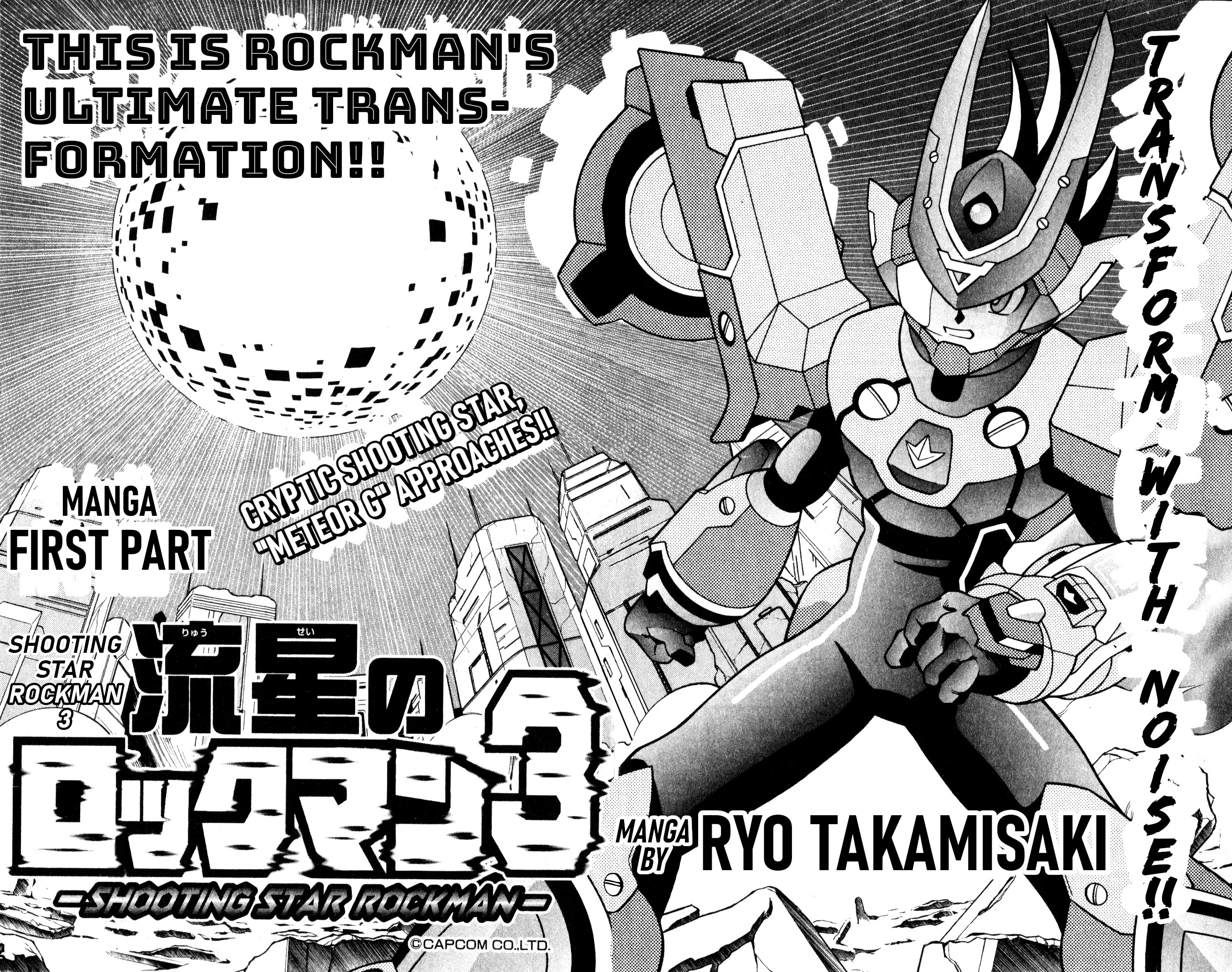 Megaman Starforce was always a fun part of the overall Megaman franchise so it’s a shame that it didn’t last longer. 3 games is nothing to sneeze at though so I guess that’ll have to do. This manga’s not a oneshot but with only two chapters it might as well be. This one ignores the events of the first manga (Probably for the best) and picks up the third game’s timeline assuming that the first two were done accurately. The artwork is excellent as expected and this really would have been a great ongoing if it had kept on. The start was really quite solid.

The manga starts with a flashforward as Megaman uses the Red Ace form to take out a powerful robot and he seems to have saved the world. We then cut to the present where digital viruses have become more frequent in their attack lately. This is because of the mysterious Meteor G which is approaching the Earth. A police officer named Shidou is concerned about this because right now the projections show this meteor destroying the whole planet when it lands. He doesn’t know of anyone who is powerful enough to stop it though. Meanwhile, Geo helps his classmates stop the viruses but he’s still concerned about this and wants to stop the threats quickly so he can go into space and find his father.

As you can imagine, the peace doesn’t last long. Geo is quickly attacked by Spade Magnet. Spade was once just a nice guy called Magnet, but the noise was attached to him by two mysterious villains so he went rogue. The noise quickly contaminates any fighter that it touches and battling a noise fighter can even corrupt you as well. That makes it particularly tough to fight against someone like this. If you reach the 100% noise level then that would be game over. The opening fight is definitely pretty solid. While it’s clear that Geo has the edge in his Megaman form, he has to try not hurting this guy too badly while also protecting his friends.

That makes the fight a little trickier but fortunately Shidou shows up and can transform into a super mode as well. That at least means that Geo doesn’t have to fight on his own which is huge here because being on your own is really a recipe for disaster in this kind of battle. The back and forth of fighting Spade while also resisting the noise makes for a good dynamic. By the end of the title Megaman is basically immune to noise which is good though. This is a solid dynamic for a fight or two but it would probably get old otherwise.

Spade was also a solid opening threat because he is definitely powerful enough to go toe to toe with these guys while not being crazy strong yet. Then in chapter 2 we get Jack who is significantly stronger. His battle with Megaman is epic and the lead would not have been able to claim victory here without surpassing his limits. Jack has a terrific design and I like his confidence. I feel like they are channeling a bit of Bly/Bass into this character with how he acts. Given that I’m a big fan of both of those characters, that bodes really well for Jack.

The 2 chapters open up a lot of intrigue and suspense with the villains in the shadows. We know there’s a whole villain group out there now. At the end the title says to read the game to find out what happens. The game was a blast but it’s too bad this couldn’t have adapted everything. Imagine a Star Force 3 full adaption with this artist? That’d be a wrap without a doubt. There’s just no way that it wouldn’t immediately be a top tier Megaman title. The artist has not lost his talent at all as the designs and action scenes here are fantastic. It makes reading the series a real pleasure.

Of course the characters are also solid. Geo makes for a solid main character who always gets down to business and wants to help out. The manga doesn’t overdo it with making him too timid or anything. He may have a hard time dealing with Luna but Geo doesn’t get too flustered or anything. He just keeps on going with his journey and that pays off. Luna’s a solid heroine too even if she is obsessed with Megaman. She reminds me of Black Cat who loved Spiderman but wanted nothing to do with Peter Parker. Luna isn’t mean to Geo or anything though so automatically she’s a much nicer character right from the start.

As for Shidou, I like this character. He may not have had a ton to do just yet, but he knows enough to trust Megaman right away and even ask for his help. I’m glad he didn’t go too far down the path of thinking that Megaman had to be destroyed. Mind you, just considering it for a moment still did hurt his character but it wasn’t anything that he couldn’t take back. As the title went on I’m sure he would have gotten better and better.

Overall, This is a really solid title. It’s basically a oneshot even if there are 2 chapters but it accomplishes a lot. If this is the kind of manga that is supposed to get you to play the game, well I’d say that it did a good job of it. I’d certainly be more interested in playing the game after reading this…if I didn’t already play it of course. If you haven’t checked this title out yet then you should change that. It’s a high quality action title and a look at what could have been if the Star Force series had just been a little more popular and kept on going. Either way I won’t soon forget this era. After the EXE part of the series, Star Force is definitely still my favorite one. X/Zero would be in third and then good ole Classic. ZX would be higher if we had more lore in there.