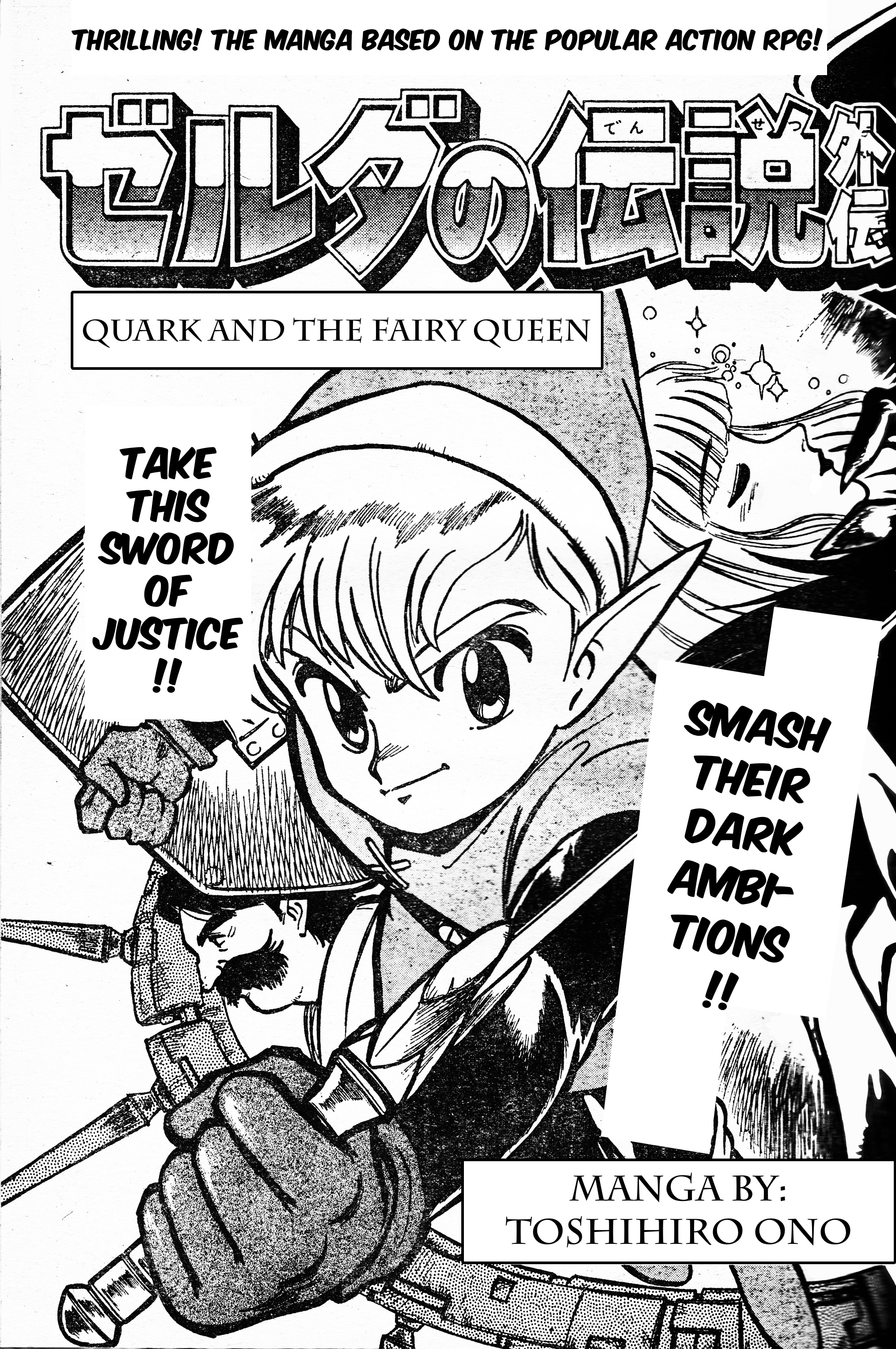 Now this is a very unique oneshot because this time Link isn’t the main character. Or I guess he technically is in a sense but they call him Quark here. I found that a bit odd myself but I figured I shouldn’t question it. It’s a fun story, I don’t see what the point of not calling the lead Link was, but this would fit in well with the LoZ mythos for his younger days.

The story starts with Link walking around when he meets a fairy and an old man in the forest. Whoops…I meant “Quark”. So Quark is on a quest to grab the 3 legendary artifacts so that he can awaken the Master Sword. Once he has that then he will be able to save Zelda from Agahnim, a powerful sorcerer who has taken over Hyrule. Unfortunately Quark isn’t able to pull the Master Sword out yet and literally cries to these two people about it. The guy is introduced as Lepton and the fairy is called Ellie. They explain that there’s another villain on the loose named Graviton. Perhaps Quark could practice his skills by defeating that guy and saving a great deal of lives? Lepton will even throw in some free lessons so Quark agrees to the terms.

Right off the bat you can tell that this Quark is a little whinier than the others. Of course he is still a rookie here but even so it’s just odd to see Quark not be more of a leader kind of guy. At one point Lepton asks Quark why he’s fighting and the hero responds with “For myself” which was not the right answer. After getting beaten up by the villains for a bit, Quark remembers that he’s fighting for Zelda and the kingdom. Better late than never I guess?…..and Quark’s sword skills aren’t great yet either as he has to be saved by Lepton. By the end of the oneshot it’s safe to say that he’s back to being more courageous.

So this isn’t the best portrayal of Link I’ve seen, but Quark’s an okay main character. I wasn’t a big fan of Lepton for most of this story because it felt like the guy was making things hard on Link for no reason. He already explained that Graviton is quite powerful but then tells Quark that he has to fight on his own against him? Why? This inevitably leads to Lepton getting stabbed and things could have been different otherwise. There’s a plot twist at the end that makes all of this meaningless anyway but it’s still not a good look for him regardless.

The idea of the character’s not bad though and if Lepton would just let go of his ego a bit more then I think he’d be a much better character. Ellie’s nice enough as the sidekick. She is looking out for Lepton and tries to make Quark polite at all times which is good. As for the villain, there’s not a whole lot to say about Graviton. He has a really solid design but the guy is partially comic relief so I wouldn’t say that you can take him all that seriously. The guy even wants to go to sleep at one point because the wait to get his power up was too long.

The humor is done well enough in the story though. It all flows together pretty well and the fights are good when they happen. There is a lot more dialogue than I was expecting initially though. The oneshot really makes sure that you have on your reading glasses at all times. If you take them off then that’ll definitely be game over for you right off the bat. It’s not boring at any point though and the oneshot is of a decent length at 30+ pages. There’s enough time for the plot to settle and this feels like a legitimate sidequest. Something that would help Quark in the long run.

The art is solid here and it’s a quality story so there’s not much more you could ask for. Quark feels out of character but I know there are a lot of different Link incarnations. I am completely used to the more serious version from Ocarina of Time and Twilight Princess at this point so it’s hard to go back to the spunky, younger versions. Still, I will say that Quark stepped up when he had too which is the important thing. I’m surprised Ganondorf didn’t appear but I suppose he can’t show up every time.

Overall, This was a fun story. Graviton had a cool design even if his personality wasn’t quite up to par. It’s always nice to see Link (I’ll just call him Link at this point. Quark just doesn’t feel right) having some help along his quest. It always feels like he has to do just about everything by himself when you hope that someone will step in to help him eventually. This was finally that moment even if Lepton didn’t want to directly help too much. I think there’s a time for training and a time for action but Lepton messed this up. If you want to see a fun little story about Link as he prepares to save the day, this is a good one to check out. You’ll definitely be blasting through it in no time.

2 thoughts on “The Legend of Zelda Gaiden: Quark and the Fairy Queen Review”