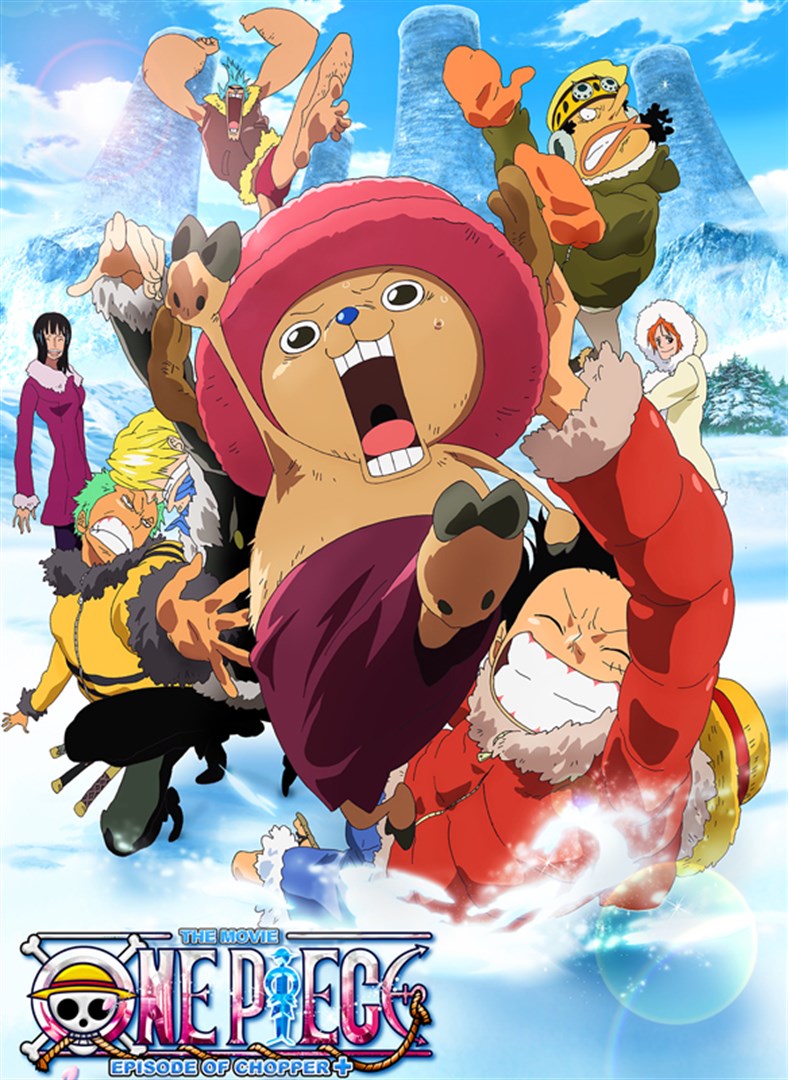 One Piece has the next arc remake with this movie tackling the Tony Tony Chopper arc. While this arc is not considered to be one of the stronger ones and tends to pale in comparison to the new ones, it’s always nostalgic to see the old team. I’d say the crew also learned from the last movie remake and made sure that this one had longer fights and a longer length in general so it felt more like a complete experience. It’s still hard to do a whole arc in one movie but I’d say they did a good job with this one.

The movie starts with the gang on the ship as usual but then Nami gets seriously ill with some kind of virus. She is fading fast and so the heroes stop by a local island to find a doctor. Unfortunately all of the doctors are gone except for one who is regarded as a witch named Dr. Kureha. She lives alone atop a giant mountain so Luffy will have to try and carry Nami there. The main obstacles in his way are: The terrain which is naturally dangerous, Nami’s health which is fragile right now so Luffy can’t fight or make too many sudden movements, and the Wapol pirates who hav e returned to retake the island. Can Luffy save Nami in time or is it too late?

While the whole crew it here, Luffy does most of the work. Zoro and Franky get to beat up some minions and Sanji fights some of the animals but for the most part the rest of the crew is written out. The way they got Sanji out of the big fights was the most awkward though as he injures his back somehow and can’t fight anymore. That scene was really hard to buy. Sanji’s back gave out just like that? I’d have preferred him to lose to one of the pirates instead since at least he would have gone down fighting.

As for the villains, there are two main ones here. First up is Wapol who was in the original arc as well. The guy may not have been super powerful but he does his best with the chomp chomp fruit. He gets a rather big powered up form at the end which may not have been enough to save him but it looked cool enough. Then he has a brother named Musshuru who was made up for this version. He looks rather skilled as he is able to trade blows with Luffy and keep at it for a while. I can’t say he was a very interesting villain but I’m always up for some good fights.

After all, that’s part of the fun in this movie. The characters get to see a lot of action this time. Also, the animation style is very distinct. It’s going for a bit more of an abstract feeling at times with a different color set than usual. I wouldn’t say it beats the classic style but it does help the film stand out which is an important thing in a movie. You want it to feel extra special and this is one way to go about that.

The soundtrack has your typical One Piece themes. Nothing very new and different but they always sound good so I didn’t have a problem with that. The music tunes are fitting for the scenes that they’re in. You can feel Luffy’s determination as he climbs the mountain while the music is going and why he’s a solid lead. The film has its share of emotional moments after all and the soundtrack balances them pretty well.

There are two main doctors here, the one from the flashbacks and the one in the present. In the present we have Dr. Kureha who has done well to continue practicing medicine even when she sees all of her colleagues “vanishing” or being directly captured by the villains. It’s a risky line of work but she doesn’t falter and definitely ends up being a really solid character. She’s the kind of character who has a tough time actually voicing her true feelings but will always help silently.

Dr. Hiriluk is the other character but I did not like him. His personality type is that he’s a really nice guy who is chasing a dream that is nearly impossible to achieve. He wants to make the Sakura blossoms bloom in this winter land despite everyone telling him that this is crazy. Along the way he meets up with Tony Tony Chopper and the two of them become close friends. It’s all good so far but then Hiriluk realizes that he will be dying soon from an incurable disease.

He then makes the wrong choice by shooting at Chopper to make him go away and to get some distance between them. Chopper had been traumatized by guns before so this felt like a really cheap move by the Doctor. I also think he should have just been upfront with Chopper about this. Tell him that death is near and then they can at least enjoy some happy days together at the end. It is much better than trying to destroy your reputation and friendships. So I lost a lot of respect for the Doctor at that point.

Finally we have Tony Tony Chopper who is a nice enough guy. He was never my favorite member of the Strawhats as the guy isn’t much of a fighter and I don’t think his comedy scenes work as well as some of the others but he still does have his moments where he helps out. Ultimately Luffy and friends are able to get him to a better spot but he gets outshined by all of them here.

Overall, Episode of Chopper is a fun adventure. If this is your first way of seeing the arc then you should still be fine. This movie does a good job of recapping things. Some of the events are a little different like we have some members of the team who shouldn’t be around yet. That might confuse you a little when you go back to the show and see them introduced but I want to say that it’s a very small amount of people who would have actually started the series with the movie recaps instead of watching the show. The movie is a good action adventure film in the end. It’s not trying to be much more than that and doesn’t need to be. Whether you like the franchise or not, you should have a good time with this one.

3 thoughts on “One Piece: Episode of Chopper Plus: Bloom in Winter, Miracle Sakura Review”