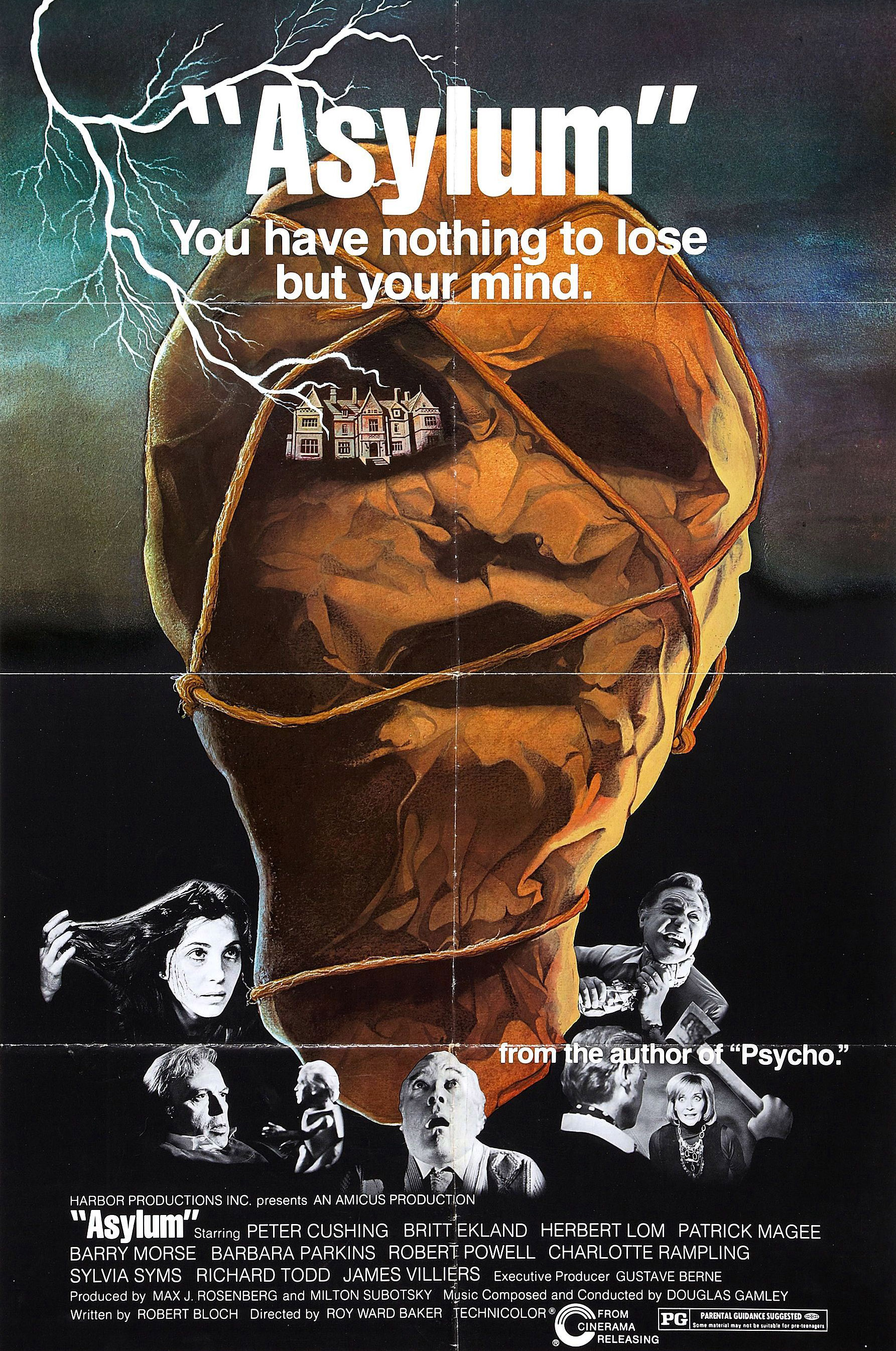 Anthologies usually aren’t the right format for me. There aren’t a whole lot of benefits that come with this style but a lot of weaknesses as a good story could be brought down by some others. Fortunately this was a rather strong collection of stories or at least a lot stronger than I was expecting. My confidence in horror films is not very high so I was expecting something pretty bad here. in the end I was impressed and this is better than most other rival titles.

The film starts off with Dr. Martin heading to an Asylum. A position has opened up and he has expressed interest in being there. The head doctor Lionel wants to give him a test first. Martin must interview with each of the patients there. This will let him get acquainted with the place and patients while also testing Martin’s skills. See, one of these guys is the actual head doctor -Starr, but the guy went crazy so now Lionel runs the place. He wants Martin to tell him which of the patients is Starr. With that, Martin heads to the rooms and begins to learn each of the stories there. Can he make the right call or will this just break him as well?

The first story involves a guy who is cheating on his wife with another lady. He figures that the only way to escape is to murder her so he takes her down to the basement and bumps her off. He’s quite thorough about it and figures that she won’t be a threat anymore while in pieces but quickly discovers that this isn’t the case. Her remaining parts are still able to move so she takes him down for the count and then scares the other girl into insanity. In the present Martin doesn’t believe that a dead person could possibly have kept moving and figures that the girl is insane.

This was a decent way to start off the batch. The story does seem a whole lot like the one in Creepshow so it isn’t very original but it does set up the atmosphere. The characters are all made to be super unlikable but of course you are rooting for the wife to get the last laugh here. Since the stories are all told from the present there is also an interesting dynamic here since you know that the person telling the story has to survive the experience. The rest of the characters aren’t quite as safe though. So, is this character crazy or was it supernatural? You will need to ask yourself that after each story.

Next up was a mysterious suit that made someone go crazy. See, this guy was a tailor but he was hard on cash at the moment because people just weren’t buying his suits or needed theirs fixed. Fortunately one guy stops in with a very expensive order one day. He’s a bit eccentric though and tells the guy to only work on the suit at night and to follow a ton of instructions. The tailor follows most of them rather well but gets greedy and does prick the suit once. Unfortunately the client isn’t as rich as he acted and apparently has nothing to pay with. This leads to a scuffle and the suit actually becomes alive. The tailor is now scared out of his wits and has been driven insane.

Definitely a good second story and one of my favorite ones. It reminds me of why you need to ask for cash up front or you are likely going to be swindled. Otherwise you end up with the client suddenly not having the money when you were counting on it. It seems a little less scary than the other stories though so it’s hard to see how this would make the guy so insane. I mean, it’s weird to have a glowing suit that’s actually alive I guess but it’s not too crazy. Still, it made for a fun segment.

In the third story we have a girl who previously suffered some kind of crazy episode. Her brother has taken her to his big mansion so she can rest. The lady is rather upset though because the doctor’s orders are fierce and include her having to take a mandatory nap every day while it’s still bright and early. Fortunately her twisted friend Lucy appears and says they can run away together. The main character just has to beat her pills addiction. Unfortunately it appears that Lucy was not actually real and the main character is just really insane as she bumped everyone off.

I would say the main thing holding the story back is that it feels obvious that Lucy is not real from the start. Of course the twist could be that she is real but otherwise you think that the main character really is crazy. In the first two stories you don’t think that necessarily but here it’s hard to believe that there was anything supernatural going on here. It ends up just being sad for the victims who weren’t able to do much here. I would end up putting this as the weakest story out of the bunch.

Finally you have another story with the doctor as the antagonist. His name is Dr. Byron and he is a genius in just about every field but now wants to focus on mannequins. He figures that he has solved the mysteries of the soul and can throw one inside the doll. It’s a rather impressive invention if possible but it all seems rather crazy. Nobody would believe any of this but what’s ominous is that they can make for an exceptional fighting force if they’re real although there is a big weakness to linking your mind to a very small and very breakable doll.

Well, those were the various stories here. As you can see, this was actually a rather fun batch the whole time. The stories tended to rely more on atmosphere than being super violent or anything. The villains didn’t go too far and the asylum was a good way to connect each of the stories. It was always fun to see Martin walk into the room and get things started. I liked the guy’s absolute confidence the whole time and the way he handled himself in the climax as well. Martin demanded respect at all times and wasn’t going to just be playing games or get tested.

That said, his reactions towards the end were pretty bad. The guy is not good at adapting on the fly, I think it’s safe to say that this is a big weakness for him. I wasn’t a fan of Lionel though. The guy seems petty and unreasonable for no real reason. He really didn’t have to go so far to make everyone turn against him. Honestly if he had handled things a little more carefully then it all could have gone better for him. I did like the guy who was in charge of watching the inmates a lot though. You could tell that he was very confident at all times and it’s also impressive how he was not afraid to be alone with these guys. That puts him a cut above the rest and also gives you a reason to be cautious around him. Everyone else has gone crazy so how has he stayed sane?

The unnerving feeling in the atmosphere the whole time serves the movie well. The stories are all really solid and the writing’s good. I definitely couldn’t ask for much more about a horror film in an asylum. It’s hard to top this. The climax worked well and what was equally as important as the stories were the scenes that tied them all together. It was easy to like Martin right from the start so you were definitely rooting for him. Horror films usually have a twist at the end and even knowing that, this one was quite effective.

Of course the question is, were they all insane or was this supernatural? Most of the leads really didn’t seem like quacks but lets go through all of them. The 4th story is the easiest one because we have proof that it works. So he wasn’t crazy and there was nothing supernatural going on. The guy is just an incredible genius who pulled his plan off without a hitch. Then there’s the 3rd story with the imaginary friend. In this case the main character is absolutely crazy and there was nothing supernatural going on. The biggest evidence of this is that she still sees Lucy in the present.

In the second story I don’t think the guy was crazy and this time there was a supernatural element. The book of bringing things to life was very real and same with the vampire. So this guy should be let out of the asylum. Finally in the first story it’s a little closer but I would say the girl is not crazy and that the body parts were moving a bit as part of the supernatural. So out of the 4 stories, 2 were supernatural and only one of the 4 leads was crazy. Not great for the Asylum’s intake staff but Lionel made it clear that he didn’t care about their stories anyway and just wanted to lobotomize them.

Overall, Asylum is a solid horror film that I would recommend. It’s quite rare that I have used that sentence before so you know that this one really ended up shining above the rest. I don’t expect a remake/reboot could easily outdo this one so it’s best to leave it as a oneshot for now. A sequel would be interesting though to see what happened to everyone. I want to say that everyone’s okay but I expect they could be as crazy as ever since this place isn’t exactly trying to cure anyone.